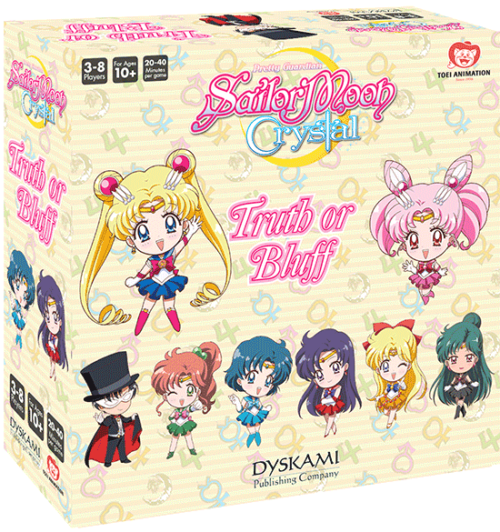 I’ll admit, game review isn’t my usual type of review, but when Dave asked me if I’d give Sailor Moon Crystal Truth or Bluff a shot for him I was ecstatic! The recent explosion of games for the series from Dyskami Publishing has the fandom glued to their phones waiting for the next announcement, and this one has everyone quite curious.

Setting up the game is quite simple. Everyone gets a tile holder filled with 12 random characters pulled from the adorable bag provided (it’s printed with Usagi’s bedspread pattern!). What is in the bag is dependant on how many players you have. The chart in the instructions was easy to follow, but we quickly understood that once you crossed the threshold into white tiles and villain tiles the game became much more cutthroat and complicated. Two Ending tiles are also placed in the middle of the table. If the conditions on one of them is met the game is over and points from your Success Tokens are added. The game can also end if someone runs out of playable characters. The winner, oddly, is the player with the highest amount of points from their Success Tokens. These are pulled randomly from a separate bag by the winner of each round. So essentially, you might have a “winner” in various ways, but they shouldn’t celebrate too quickly, because someone’s random success tokens might declare them the victor!

The general play of the game is to select a tile from your holder, present it to the player you are challenging as a character of your choosing, and have them guess whether you told the truth, or if it was a bluff. If they guess correctly you keep the tile separate from your holders unplayed tiles. If they guess incorrectly, they get to keep it. Basically, the tile is your punishment. You do not want the tile!

Where things get complicated is the person you are presenting to may “pass,” take your tile, look at it, and present it to the next person. This can be beneficial if you have a strategy dependant on the End tiles. For example, one of them reads “The game ends when one player has all 4 guardian tiles in play.” If the person you are presenting to has three of four guardians, and you’re presenting the last one, their incorrect guess and collecting the fourth tile would trigger the end of the game.

The Villains I mentioned previously also create some odd chaos. If you pull a Villain tile from the bag initially for your holder you absolutely want to bluff this find! Technically the rules are that you can only suggest your presented tiles as the heroes of Sailor Moon Crystal, but we bent the rules to allow for suggesting they might also be villains. As those tiles were so rare, when someone actually did it made players more skeptical. Villain Tiles are not necessarily bad to receive though. Each tile actually possesses a “Bonus Action” such as allowing the person who collects it to draw bonus tiles for play, forcing a tile exchange between players, or allowing the person who collected it to draw a bonus Success tile. Look out, Sailor Senshi! These Villains are actually pretty helpful.

Overall, the play was actually pretty hilarious. We even built some inside jokes (“Oh no, Sailor Jupiter!). The initial idea sounded a little basic, but once we dove into the rules it absolutely was not! This is definitely a game I’ll break out when my Moonie friends are around for a watch party, but I am glad that moving forward means I know how to play the game instead of being a little bit new to the board game scene and struggling to learn it again. The instructions are thorough, but maybe requires a summary, or a full round example similar to their Sailor Moon Crystal Dice Challenge instructions.

As a Sailor Moon collector, Sailor Moon Crystal Truth or Bluff will be a treasured piece in my collection. The box art is adorably playful, the tiles (which reuse the character art on the box) are sweet and cleanly drawn (unlike season 1 -oooohhhhh), and I adore the use of Usagi’s bedspread pattern for the tile bag. I am also happy to report that Sailor Mars does not have a bad case of Dorito face. Although, the collector in me kinda wishes the tile holders were bubble gum pink instead of black, and that maybe the Success tile bag was anything but black as well. But I’m a sucker for aesthetic.

You can learn more about the Dyskami Publishing Company on their website dyskami.ca or on Facebook at facebook.com/dyskami.

Pauline French is a feminist, nerd, artist, and collector with a serious Sailor Moon problem. If she’s not creating something, she’s likely explaining how to tell if your figure is bootleg. Check out her social media to see what projects she has on the go!

You can find Pauline online at linktr.ee/MoonFigures