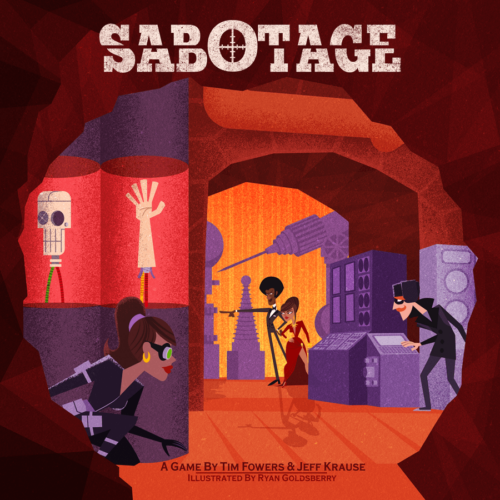 Ok, I need to get this off my chest before I talk about anything actually relevant to this game. Sabotage. I seem to be physically incapable of seeing or thinking that title without The Beastie Boys crashing through my brain. It’s a generational thing. If you somehow have never heard the song (or even more terrifying, never heard of The Beastie Boys) I’ll put the video down below. Don’t even wait to get there, just scroll down and listen now. I’ll still be up here when you scroll back up.

Back? I hope you enjoyed that. Now let’s talk about the game Sabotage. The game takes place in the world of the previously released gem of a game, Burgle Bros. In Burgle Bros the characters are safecrackers, but there are worse things in the world than pulling a heist, and the same skill set that makes a successful cat burglar makes for an equally successful spy. So now it’s up to four then-criminals to save the world. After all, there won’t be many heists left to pull if the four real villains destroy the world with their Doomsday Devices. That storyline isn’t well explained, but it also isn’t particularly relevant to gameplay.

Sabotage is an asymmetrical hidden tactics game, that requires deduction and prediction to overcome deception and secrecy. What does that mean? It’s like Battleship if the ships all moved around and you dropped different types of bombs on them. But better.

Each of the two sides in the game has their goals and win condition and each of the four characters on each side have access to their own unique actions. I won’t go through every character, but I will go through how each side works.

The Villains always go first. One of the Villain players (it really doesn’t matter which one) rolls all four of their dice, and the other players set their dice to match. At first, players can only assign two of those dice to actions, but will be able to unlock the ability to assign more dice for more actions as the game goes on. Each Action lists what die or dice can be assigned to use that action. There are a few actions that require more than one die, but the labels are still obvious.

The main Actions for the Villains are MOVE (assign a die showing 1-4), MOTION DETECTOR (1-2), STUN GUN (5-6), AND GENERATOR (3-4). MOVE is fairly obvious, that player moves their Villain from one space to an adjacent space. MOTION DETECTOR allows that Villain to choose a row, column, or quadrant on the map and the Spies must reveal if they are in that area. STUN GUN removes a spy or device if they are in the targeted adjacent space. GENERATOR adds a cube to the Generator Device; two cubes activate the device which gives the villain the ability to place an extra die while it’s active.

The main Actions that the Spies are slightly different: PARACHUTE (free), MOVE & SCAN (1-4), HACK (5-6), and EARPIECE (1). PARACHUTE is the mandatory first action a Spy must make to enter the board, revealing what half of the board they are starting in. MOVE & SCAN lets them move as the Villains do, and then name the row, column, or quadrant on the map that they are in and the Villains must reveal exactly who is in that are and if there are any cubes on generators there. EARPIECE Allows the current player to secretly move their teammate’s Spy. HACK removes a villain device, removes all Generator cubes, or removes a cube from a Doomsday device in that Spy’s room.

If that were the entire game, it would be fun. But that isn’t the entire game. Each of the eight characters has unique abilities that can be unlocked during the game, but never all of them in the same game. The variety of choices means no two games will run exactly the same. The Villains seem to have a slight advantage, but that may well have just been more about how the dice rolled than an actual advantage. Win or lose the game was a great deal of fun and a challenge for every player involved.

The only real issue with the game is the printed rulebook. There is an updated, and substantially better, rulebook online; but it feels a bit like they released a finished game with an only almost-finished rulebook. Almost everything else is brilliantly produced. Using the box as the screen in between teams is a great concept and the art on it is amazing. Although I have somewhat mixed feelings over the execution of it, it is still a really cool functional design.

You can find out more about Sabotage, including the updated rulebook, an app to play against an AI team of spies, and more at www.fowers.games/pages/sabotage. The rest of Fowers Games are online at www.fowers.games or on Facebook at facebook.com/fowersgames.