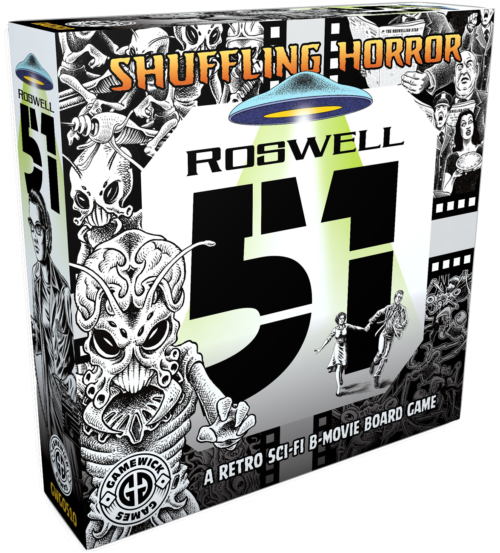 Roswell 51 is the second in a planned four games in the Shuffling Horrors series by GameWick Games. The rules are designed to run any Shuffling Horror game; if you have the first game, the zombie-themed Pittsburg 68, these rules are intended to supersede that edition and Roswell 51 even comes with a few additional cards for P68.

In Shuffling Horror games, one player takes on the role of the Director. This person runs the game and acts as a sort of RPG-style Game Master, controlling the alien antagonists and generally guiding the pace of the game. The remaining players are all in control of the Survivors in the movie. Technically the game can play 3-13 players, however, the flow and feel of the game changes immensely based on the numbers. My games all ran between 2-6 survivors and 4-5 was a really comfortable number. Regardless of the player count, there are 12 survivors that will enter play during the game. So if there are five players, each player potentially ends up with at least two survivors. If you have 13 players no one gets more than a single survivor, which means even a Director that’s playing nice is going to start taking out players relatively quickly. That being said, a player is never knocked out of the game. If they lose all their Survivors, and there are none to draw on their next turn, they become a Pod Person, taking many of the same actions as the Director, and trying to kill off more survivors and trigger an early end game.

Except for the Survivors, all the action starts on the screen. Survivors can take items from the screen, or attack the monsters there before the Director can use them against them. On the Director’s turn, they can take monsters off the screen and create more powerful groups of monsters (called a Throng) to attack Survivors with.

Earlier I likened the Director to the GM in a roleplaying game, and the more I think about it the more that comparison seems accurate. Just like a GM, the Director is one part player, one part guide, one part rules guru, and one part storyteller. Unlike an RPG, you can easily play this game straight, with the Survivors and Monsters just a collection of opposing stats, augmented with dice rolls. If you do that, the game is still fun. But when all the players, Survivors and Director, work together to tell a story; that’s when the game truly starts to shine.

Just a word of warning. If your group is looking for a game that can go straight from plastic wrap to play table, this isn’t it. For the Survivors, the game is a relatively easy pickup and go. But for the Director, it’s anything but. There are so many little details that a Director should know that it takes a fair bit of time to study. The entire thing is printed in black and white, which somewhat suits the theme and I often more economical, but it made everything feel like it was running together. If I’m not actually looking at the rulebook, I actually forget that there is any art at all. The reference pictures, the flavour art, the headers, the regular text, and the informative sidebars all just land in my brain as a solid 20-page block of text. This made things extra hard if I was trying to find a particular rule I wanted to double check on the fly. There’s no table of contents and no index, so even things I looked up multiple times took a ton of flipping back and forth. There is enough in this rulebook that adding four pages to the layout (because you can’t just add one, it doesn’t work like that) would be easy, even if all you added was an index page of some kind. When the next installment, Innsmouth 32, comes out I would be thrilled if the only changes to the rules were literally just changes to the colouring and layout of the rulebook.

What may well only be my personal issues with the rulebook aside, this is an extraordinary game. Everyone enjoyed it. The theme is spot on. The mechanics work well (even when the Director pulls a lucky series of monsters, suddenly terrifying the survivors). It’s definitely worth the prep time to run.