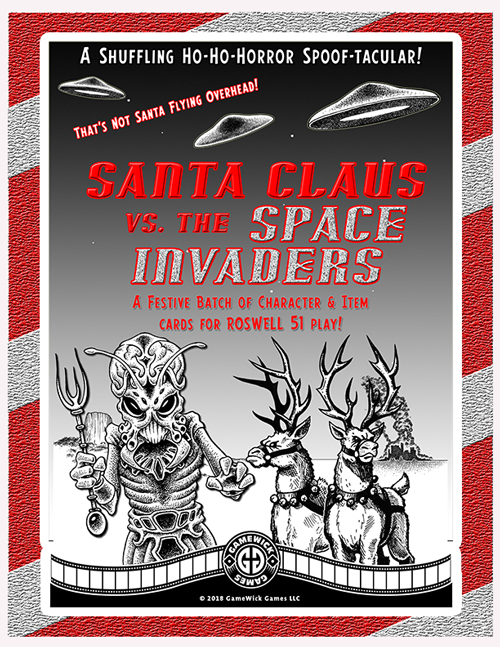 A few days ago I posted a review on Roswell 51, part of the Shuffling Horrors series of games from Gamewick Games, and for the past 5 weeks I’ve posted a weekly holiday themed review. With Christmas in a few days, I have time for one more Christmas game. So let’s make it a fun one, with Santa Claus vs The Space Invaders, a mini-expansion for Roswell 51.

The booster-sized set includes eight new survivors and six new items in the print-and-play edition and a few bonus cards in the pre-printed packs. To play with it, you remove eight of the original survivors and six original items, replacing them with the expansion cards.

The new Survivors are all Christmas related, although The Kids seem to have a more obscure, specific, reference. Unlike the regular Survivor cards, each of these has a special power, like the Reindeer getting two attacks (because there are two reindeer in the picture, obviously). That small addition adds a nice bit of depth to the game, without complicating it too much. I don’t think I’d want to see every Survivor in the game have an ability, but a liberal sprinkling of them is good.

The Item cards felt less Christmasy all around. The coal references made sense, I get the rolling pin, the candy cane was obvious. A bb gun I can sort of see, but the nunchuks just felt wrong. If the art had at least been candy striped nunchucks, I’d have bought into it more. But as a whole, I would have loved to see a bit more theme, and just more cards.

There are only eight replacement Christmas Survivors, but as I mentioned in my base game review, there are 12 Survivors in a game. Since all the survivors are guaranteed to enter play, those extra four spots can change, adding extra replay variety that the game otherwise lacks on its own. Only replacing six out of eight items technically does the same, but it’s a less impactful thematic change.

I love expansions like this, that let you easily tweak and change a game, with needing to buy a whole new thing that will only see daylight a few times a year. This set did a great job of that, although I’d love to see a second set come out next year, replacing most of the monster cards. Even if that has to be just a print and play set.

Instead of a just another Christmas song, I’m going to close out this holiday season with the entire 1964 movie that inspired this game: Santa Claus Conquers the Martians!