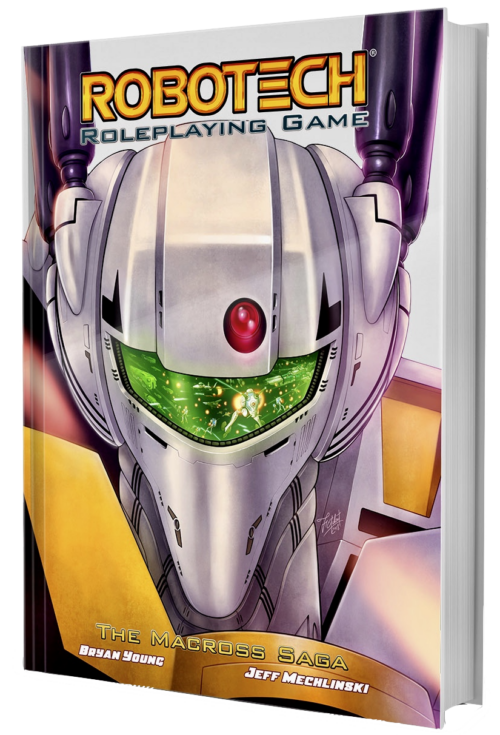 Like many people my age, Robotech was one of my first exposures to anime. I have fond, yet vague, memories of Saturday morning space battles against the Zentraedi forces. It wasn’t until many years later that I found out there was more to it, and I still don’t know nearly as much as I wish I did or the time to put into it that I wish I could. When I first had the opportunity to write about Attack on the SDF-1 and Ace Pilot I was stoked. Even in the video that I shot about them, I excitedly mentioned that this RPG was coming down the pipes.

Robotech The Roleplaying Game is not the first RPG based on the franchise, but it does certainly have the potential to be the most successful. The titling is interesting, as the proper name is Robotech: The Macross Saga The Roleplaying Game. The Macross Saga refers to the timeframe surrounding the First Robotech War. This is undoubtedly the most recognizable and popular era in the Robotech franchise. With that said, Strange Machine Games new game, Cyclone Run, takes place in the era of the Third Robotech War (The New Generation era); and that makes me wonder if there might not be subsequent RPG materials expanding into the eras after The Macross Saga.

The game is extremely easy to walk up to the table and learn to play on the spot. If you have a new player, Strange Machine Games has made it even easier for them to learn the basics with a “Learn to Play Fast” section that points out the most beneficial pages for new players to get the important concepts down. I learned just how easily when I sat down and played with one of the designers (just before the COVID-Apocalypse). I was intrigued by how well the narrative structure weaves together with the action. The best explanation, in most cases, is that if the GM took the time to say something; that something can be used in the game by a creative player. Did the GM mention an empty beer bottle? You bet you can smash that bottle over someone’s head. Those electrical cables and bucket of mopwater that got mentioned in passing? Someone might be getting zapped into a new hairdo.

As long as the GM agrees with your justification they can give you a bonus on your roll to (hopefully) allow you to gain more successes. When you roll your handful of six-sided dice, based on the combination of skills applicable to the roll, that bonus could mean succeeding on a 4 (as well as a 5 or 6) or maybe giving you two successes for each 5 rolled (instead of just for on 6s). Conversely, you may end up with similar penalties making it harder to roll successes.

The Macross Saga era of Robotech focuses around the conflict between the newly spacefaring humans, and the giant, war-obsessed, Zentraedi. Players have the opportunity to play as characters of either race and on either side of the conflict. They can choose to play the iconic characters from the show, or build their own soon-to-be legend. A good majority of the book focuses on all the usual character building and gear that most games have. Of course, there’s also the extra layer of battles between mecha, or on the even larger scale of ship-to-ship space battles. These sections are interesting to be sure, but they take up a larger amount of space since you can play as the United Earth Defence Forces or the Zentraedi and therefore need all-the-everything about both sides.

When you get into conflicts in the game these get broken down into very distinct phases, in comparison to many other games. Forst the GM will describe the conflict. Then the players get to talk over their plans and choose what actions they will take, and in what order, during the Take Actions phase. When the action phase rolls around (literally, because this is when the dice get rolled) all the players and enemies roll at once and the GM gets to decide the priority of resolution. The order of the character’s actions get planned out during the previous Communication Phase, but the GM similarly gets to plan out the actions of the enemies. Which may put a damper on the players, plan. There is no set initiative, per se, but certain actions can allow one side or the other to Get the Drop on their opponent and go first, or Slow them down forcing them to take their action after everyone else. When this system goes well, it’s a beautiful thing to behold. It does require an extra level of honesty and flexibility by the GM. More than most games it is vital to remember that a good GM may be working against the characters but they are always working WITH the players to create a fun story. The final phase is the Cinematic Phase that lets the characters interact with the world around them in a non-combat way. Things like trying to protect civilians caught in the middle of the battle.

There are also a number of optional rules that can increase or decrease the narrative elements of the game overall, or even make the game more realistically lethal. In short, you can play Robotech the Roleplaying game however you want. The rulebook actually concludes with an eight scenario romp through the television story arc, and another eight alternate scenarios that we’ve through the timeline, just not specifically on camera.

There is simply so much goodness packed into this rulebook, for such an easy-to-play game. There a few points that weren’t as perfectly clear as I might like to see in an RPG book of this overall quality, but the game really is fun enough to overlook that. In this, again more than most other games, if the GM runs into questions they can just make it up and everyone will be having enough fun that they won’t even know the difference.

You can find Strange Machine Games online at strangemachinegames.com or Facebook at facebook.com/StrangeMachineGames.