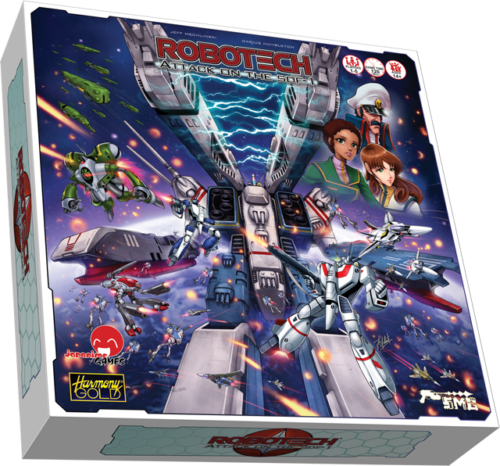 Cue the narrator: “Welcome to You Bet Your Life. Today’s not-so-secret word is disappointment.”

Cue Groucho Marx: “Remember if you say today’s secret word, you’ll win absolutely nothing. It’s a common word, something you hate to feel when playing a game you want to love.”

I win nothing with today’s review. I can’t express just how disappointed I am to have to say how disappointed I am in Attack on the SDF-1. There honestly is a great game in there somewhere, but we couldn’t find it. In an effort to end on a high note, I’m going to touch on the negatives first, then move into the positives. Because there really are quite a few positives. There are probably more positives than negatives, which makes it even more disappointing.

Robotech: Attack on the SDF-1 is a scenario-based tower defence game, where 1-4 players take on the rolls of various crew members. Each of the six available characters has their own strengths, weaknesses, and abilities. There’s so much potential here, so please stick with me until the end.

The more I think about it, there really is only one major flaw with this game. The rulebook sucks. I’ve certainly come across worse rulebooks, don’t get me wrong, but it’s just not good. Both times playing we spent more time trying to figure out things we couldn’t find in the rulebook than we did playing. Often when a detail gets missed in a rulebook, it’s something small and intuitive. Something that is only hard if you overthink it (which never happens at the game table, right?). This rulebook is missing a few frustratingly large chunks of information, and even while we tried to play through the scenarios, we spent more time trying to find those details than actually playing. I’m going to come back to this point a bit later but will move on for now.

The only other negative is actually not that bad, or even something that I’ve encountered just yet. It’s more of a bad feeling. If you know Robotech at all, you know that The SDF-1 has two modes. Cruiser Mode is just a big battleship that is represented by a flat, circular, board that is played on top of the main game board. One of Captain Gloval’s abilities is to use his movement to turn the SDF-1, changing its orientation left or right by one section of the game board. The Battle Mode is the eye-catching thing about this game. Standing around 6 inches tall (I forgot to measure exactly) it comes into play, again, by way of Captain Gloval’s abilities. The figure is constructed out of an elaborate set of heavy punchboard pieces. The initial punching and assembling took a surprising amount of time, mostly because of wanting to make sure not to damage anything. The head is a bit delicate, and the assembly slots are a bit finicky but overall it seemed good quality. The second time assembling it went much faster since the tiny friction lock tabs built into the slots had loosened up a bit. If you have a safe space and are so inclined, you could honestly just leave this thing assembled and out on display. Even after only disassembling it twice, the pieces we starting to show some wear. Similarly, the six characters each come with punchboard standees. The command crew each have a matching base, as a reminder that they must stay on the ship. The base for each pilot shows an image of their Veritech, as a reminder that they can be on the ship, or out in space. That element is great, but the standees are simple tab-in-slot style, allowing them to come apart too easily. Japanime Games does offer a set of acrylic standees, but the description doesn’t say if they include bases, or are just intended to use the punchboard ones. The art is the same on both versions, and it’s great art, but I can’t confirm if they otherwise will or won’t solve the tab-in-slot problem.

You On the positive side of things, the overall quality is great. The character boards, and even the reference cards, are heavy duty and will stand up to a ton of play. The Gameboards are equally high quality, and wear and tear concerns aside so is the Battle Mode figure. The art is eye-catching and modern while staying true to its origins, although some of the component art is nearly identical to the Robotech: Ace Pilot game. But there isn’t any need to change something that’s working well, so that’s not really an issue.

I love the concept of the scenarios in the game. It’s a big part of what sets Attack on the SDF-1 apart from similar games and that’s a good thing. If you can get the rules down, it’s a fun play that should follow along with the first generation storyline of the series. I have intentionally not looked ahead in the scenario booklets, and have intentionally left a few details out of this review to avoid spoilers. There was one exception to that. I did jump ahead to the Special Forces scenario booklet. It contains several standalone scenarios that aren’t fixed to the main plot, and I’m looking forward to trying them.

Whenever I find myself in a situation where I feel like I’m missing something in a game, I like to put it aside and come back later with fresh eyes. My friends and I have decided we WILL pull this game out again in a few weeks. Instead of focussing on the main scenarios we are going to try out the standalone games, along with the optional Escalation Mode rules at the end of the main rulebook. It’s a simplified variant that is a straight defence game against continuous waves of Zentraedi vessels.

I’m really looking forward to trying this game again, and sharing my thoughts on it with you when I’m able. I don’t like having to say that I was disappointed in a game, and I want to give it the opportunity to shine the way I know it can.