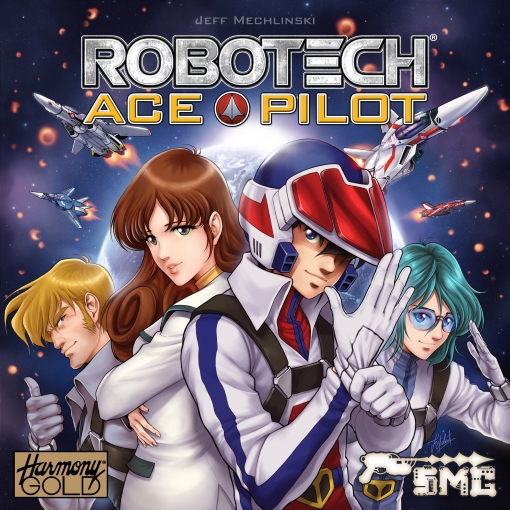 I’ve probably said this before, but Robotech is my era of anime. If you wanted anything more than the handful of shows on cable, you were trading VHS cassettes in a dingy basement card shop. So when I got ahold of Ace Pilot and Attack on SDF-1 from Japanime Games and Strange Machine Games, I was beyond excited.

Robotech: Ace Pilot is fast, simple, game for two to four players. Each round players have the opportunity to purchase up to two of the available hero cards on the table. The heroes will use their attacks to damage or destroy Zentradi ships represented by stacks of tokens in a 3×3 grid.

To do that, each player will roll five custom dice, and use the symbols they roll to take the hero they want, rerolling any unspent dice up to two more times. When a play takes a hero, they get to use their attack. Each hero has a unique attack, that may involve a specific pattern or exclusions to that hero’s attack. For example, Claudia Grant deals 1 damage to each cell in a single row or column of the grid, whereas Captain Gloval deals 4 damage to a single cell, but cannot target the corner cells.

As each player purchases heroes, they are removed from the pool of cards available for the following players to choose from in that round. Once each player has taken their turn, all the heroes return to the pool, and the First Player token is passed to the left. In a three or four player game, if a player (other than the current first player) takes Captain Gloval, that player becomes the First Player for the next round, but no one may be the first player for two rounds in a row.

There are six possible Zentraedi Ship Tokens, each with 1-5 hit points and worth up to 9 victory points at the end of the game. There are also 8 Upgrade Tokens that have 2hp and are worth 0vp but allow players to draw an Upgrade Card that they can use later. That makes a total of 99 possible tokens, of which only about 3/4 will be selected to use in a single game.

To randomly select which tokens are used, they all go into a blind bag and are drawn and placed on the grid from there. If the bag was used for anything more than this selection process, it would be too small. Ultimately, its most important use is just keeping the unused tokens together and hidden.

The tokens are only about 1″ making them too small for anything more than simple art, but the portraits on the hero cards are top notch. We were out in public, and more than once people stopped to see what we were playing.

All told, Robotech: Ace Pilot is a great time. It’s a perfect filler game, or just a game to play while you wait for that player who shows up late.