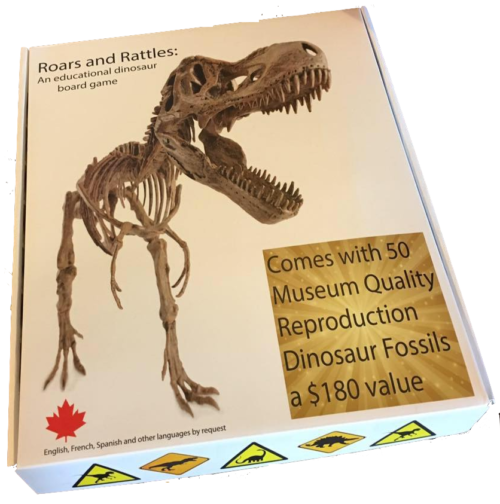 Roars and Rattles is an “educational dinosaur board game” designed by Meara Danielle McIntosh, R.T.Biol. The basic is a simple roll and move still game, making it ideal for the age group that is also often obsessed with dinosaurs. As players move around the board, they will try to gain 10 Trilobites by answering trivia, identifying fossils, and raising their own dinosaur.

In the realm of “Are You Smarter Than A 5th Grader”, the trivia questions are likely going to be harder for adults than for kids. I will admit that any time I played, I legitimately had a harder time with many of the answers than the kids I played against. The only real downside is that there are only a limited number of questions in the main game. There will be expansions with more questions, as time goes on, but at first, the easiest thing is probably just don’t let THAT kid get ahold of the cards to memorize them all right away. (I learned that lesson the hard way). Although even if that happens, the ultimate goal of the game is about education and memorizing trivia is (sort of) educational.

Where this game really shines is the components. There is a whole organizational structure behind the scenes, in the archeology world, over who has the rights to create reproduction fossils. In the current edition of the game, the resin trilobites and museum quality fossils are all hand cast from fossils owned by the creator. The standard fossil pack is called the Drumheller Fossil Pack, consisting of pieces found around the Horseshoe Canyon Formation in badlands of Alberta, Canada, and there are several additional fossil packs being developed for the future (just like with the trivia cards).

There’s no huge strategy for playing and the rules easily scale down for younger players. In short, Roars and Rattles does exactly what it sets out to do. It entertains and educates players of every age. If you’ve got dinosaur lovers in your life, this is a game worth investing in, and it’s just going to keep getting better.

You can find Roars and Rattles: an educational dinosaur board game online at roarsandrattles.com or on Facebook at facebook.com/Roars-and-Rattles-An-educational-dinosaur-board-game-1760771334034308.

1 thought on “Roars and Rattles”