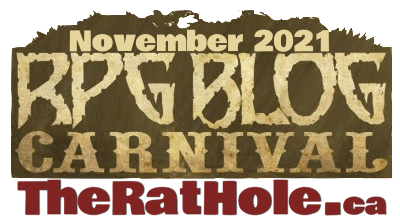 The end of November draws near and so does the end of our hosting of the RPG Blog Carnival. All this month the site has featured articles, interviews, and reviews of great Indie TTRPGs for you to explore with your group. While the tempo of Indie coverage might slow down after November, you can trust that we’ll keep bringing you the word on games in the Indie sphere.

Today let’s talk a little bit about Actual Plays (APs). There is no secret that the actual play field, already growing before the pandemic, absolutely boomed when the pandemic hit and most of us were forced to isolate at home. New groups, channels, and shows sprang up everywhere and audiences were spoiled for choice. Except…not really. The vast majority of shows that sprang up were playing D&D, and most of the rest were playing Pathfinder, Call of Cthulhu, and other better known large titles. That makes a certain amount of sense, if you’re an AP wanting to attract an audience; give them a variation on something familiar so there is a certain amount of comfort coming into your show.

But it means one thing for sure: however it was before, actual plays seem to be here to stay, both as entertainment and as a marketing tool for TTRPGs. Even a few one-shot actual plays of a new Indie TTRPG can bring more investment and buy-in than any blog post or Tweet could. For weal or woe, if an actual play isn’t in your game’s marketing strategy you may want to reconsider. One of the hurdles to getting folks already in the TTRPG scene to look at new game systems is the preconception, right or wrong, that all of them require as much investment in both time and money as a D&D or Pathfinder does. Anyone into Indie TTRPGs knows that is no where near the case. But explaining that to folks takes a pale second place to showing them. A few hours of folks laughing and enjoying your game can go a long way to attracting the eyes of new buyers/players, as well as ease their mind about the time/money cost of learning your game.

So that’s some good reasons for an Indie TTRPG publisher to put out an actual play. But once they’ve done that, they need our eyes on their shows. It can be hard to fight through the background noise of D&D APs and find the Indie APs already out there. It takes a bit of work, following the right groups on Twitter, checking out websites, checking out Indie APs when you find them and sharing them so other folks can find them as well.

While this has been a long walk to our destination, today I want to share some links to channels and groups that support Indie TTRPGs through actual plays. Some do one-shots, some have actual series, but all of these places are putting out truly excellent entertainment that just happens to not be any of the (arguably) Big Two, D&D and Pathfinder. We’ll maintain this as a living list as well, so if you have suggestions for shows featuring games other than D&D or Pathfinder, please drop their links in the comments.

So in no particular order, here’s some Indie TTRPG actual plays you should check out:

As I said, this is a living list so make sure to bookmark this page. I’ll drop back periodically to update the list and fix links. And if you have an Indie TTRPG AP you love that I haven’t listed, drop them in the comments and I’ll move them up to the list when I stop by. In the meantime, you have some shows to watch. Enjoy!