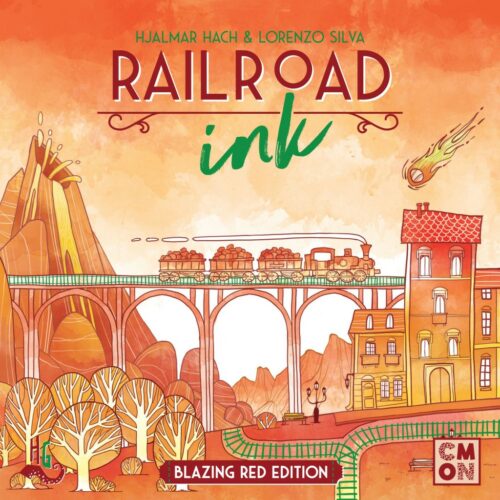 I don’t often tell people that I am a reviewer, especially not when I’m shopping. Because, even though I am only making conversation, people seem to think I am asking for a discount, or a free game. I made an exception after walking around the River City Games at West Edmonton Mall for nearly half an hour without making a decision. So I went to the counter and explained to the woman “Hi, I’m a game reviewer for an Alberta-made blog, The Rat Hole. I’m looking for something new; do you have any games that you believe aren’t getting the attention they deserve?” Without any hesitation, she walked me over to Railroad Ink, by Horrible Games / CMON Global. There are two versions of this game, Deep Blue and Blazing Red. I borrowed a die from the front counter and ended up with Blazing Red. (Yes, decision making dice are a thing for me.)

What is Railroad Ink? Well, if Yahtzee and Ticket To Ride had an affair, and the resulting child had a mischievious Water or Fire Elemental as a Fairy Godparent, the result might come close to being Railroad ink. While doing some research for this review, I learned a new piece of gaming terminology, “multiplayer solitaire”. This is a term, often derogatory, for games where the actions of one player have little or no effect on the gameplay of the other players. Classic examples of multiplayer solitaire games include Bingo and Yahtzee. Basically, any game where every player has their own gameboard could be given that title. Not that there’s anything wrong with that.

Railroad Ink is a 1-6 player game for ages 8 and up. Each player has a gameboard and a dry erase pen. There are also two sets of dice, four white dice for the basic game, and two pairs of colored dice for the advanced rules. The goal of the game is to create as many train tracks and highway routes between the exits marked on the edges of the game card, in seven turns for a normal game or six for the advanced game. I will start off by explaining the basic game, before adding in the extra dice.

The four basic dice, instead of numbers or pips, show drawings of different types of routes and stations. There is the straight highway, the straight railway, the highway bend, the railway bend, the highway T-junction, and the railway T-junction. There is also the highway overpass, the straight station, and the corner station. The stations allow you to connect a railway to a highway, or vice versa. The overpass allows a highway to cross a railway, but they aren’t connected (this will be important later). Only one roll of the dice is used by all the players and each player marks on their own board. Since I didn’t realize it right away, I will point out that even though the route bend and corner station images show a right-hand turn, you can use it for any 90-degree turn. When drawing a route, you have to draw a new route connected correctly to either an exit or a route in progress. For example, you can’t attach a railway to a highway without a station, or place a route on a random space on the board.

In addition to the routes on the dice, there are also six specialty routes written at the top of each player’s gameboard. They are all four-way connections. There’s a four-way highway, a four-way railway, one highway connecting to three railways, one railway connecting to three highways, and two different configurations that connect two railways to two highways. A player can only use a specialty route three times in a game, and only once per turn. Since you have seven turns to work with, it is important to use these while you still have the chance.

When all seven rounds are complete, it’s time to score. First, you count how many of the exits are successfully connected by routes. Use the chart printed on your gameboard to determine how many points you get. For example, four exits gives you 12 points, and six gives you 20 points. If you have more than one complete route, you can count them separately, thus getting more points. The next scores are for the longest continuous railway and the longest continuous highway. You lose one point for every time a highway or railway route goes nowhere. Finally, you get one point for each of the nine center squares that have something drawn on them, regardless of whether it is part of a complete route. Add all the individual score numbers to get your overall score. As usual, the highest score wins.

Once you are familiar with the basic game, you can try out the special dice. Each version of the game has two expansions: Blazing Red has Meteors and Lava; Deep Blue has Rivers and Lakes. (Of course, I would end up with the more violent of the two.) In the Meteor game, random rocks are falling out of the sky. The good news is, if a route leads to a meteor crater, you can harvest metal. The bad news is, your construction can be destroyed at any moment. The two red dice determine the location of next meteor strike, one for distance, one for direction. On the first turn, you count from the center of the board. After that, you measure from the location of the last crater. Each time you draw a crater, you must erase whatever was already drawn. A meteor cannot land outside the game board, or in a crater from a previous turn. If a meteor gets to the edge of the board, it bounces in the opposite direction. If a meteor would land in a crater, it keeps going until it reaches a free space. At the beginning of a round, any player can give up one of their special routes to ignore the meteor strike on their board. It is possible to erase a crater to draw a new route. But if it is the last strike, you still need to leave a mark to know where to count from next time. There are no negative points for having craters on your board, but you get 2 points each time a route leads to a crater.

In the Lava expansion, you have the misfortune of building in a volcano zone. Before the game begins, each player draws a volcano in the center space of their board. The two orange lava dice show various shapes of a lava flow, two of which also include a highway or railway route. In addition to the white route dice, each player must draw at least one of the two lava dice. Newly drawn lava must be connected to an existing lava flow or a newly drawn volcano. Lava can erase a route square, but unlike a crater, nothing can erase lava. Strangely enough, you get positive points for having lava lakes on your board. You get 5 points for each lava lake that doesn’t have an open side. An open side counts like an unfinished route. You also get 1 point for every square covered by your largest lava lake.

I cannot give all the details for the Deep Blue Edition, but I do know that the expansion dice are Lakes and Rivers, both of which can be used for transportation. If you own both sets, you can play with up to 12 players; which is great for convention game rooms or other large gatherings. This is a simple, but strategic, game that can be played over and over. You can play it alone, or with friends. I know that some people will dislike the lack of player interaction, preferring more direct competition. But others might enjoy the idea of doing their own thing, without their plans being messed up by someone else. It all depends on your point of view.

You can find Horrible games online at www.horrible-games.com or on Facebook at facebook.com/pg/HorribleGames.