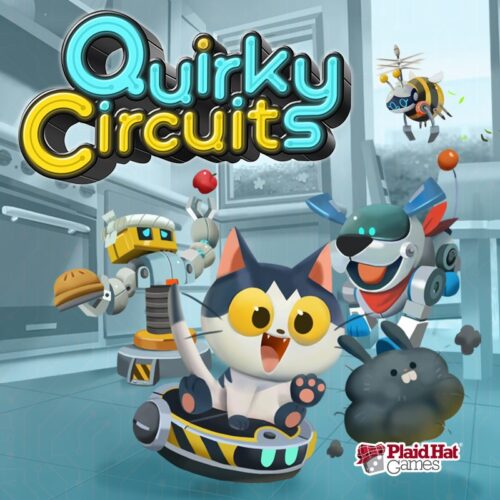 Quicky Circuits is one of those cooperative “hivemind” games where you can’t communicate as the group tries to fulfil a common goal. It’s one of the few mechanical genres I’m not a big fan of. My brain is eternally out in left field. I’ve had chess players comment on how hard it is to anticipate what I’m thinking. Hivemind style games are frustrating for me and often frustrating for the people I’m playing with. Quirky Circuits does a great job at mitigating that issue, and the result is probably one of the best co-op games I’ve played in a long time. Not just the best hivemind, best co-op period. It’s frustrating, but in that addictive videogame way that makes you want to try again until you succeed. So, let’s look at some of the things that make it so much fun.

The most obvious thing is that there are multiple cute miniatures and each of them behaves differently. I’ll detail that more in a bit. Similarly, the scenario book is also visually appealing as well as being functional. Again, I’ll come back to that. What I want to tackle first is what makes this hivemind game different.

The general goal in the game is to collective control a robot around the board to fulfil specific goals. Each turn, cards are dealt out and played by everyone, face down, to program the robot’s actions for that turn. Each player must put down at least one card but can play as many as they want at any time they want. The only restriction is that certain cards may have to be placed down first if a player has them in their hand. While you can’t communicate with the other players, there is still a great deal of information on the back of the cards. Most cards have a blue backing and an icon that indicates whether the card is a move action or a rotate action. Some cards have a yellow backing with an icon that indicates it is a Pickup/Drop action or a special action. The special actions normally must be played first, and will vary by scenario. All the players are aware (or should be aware) of what those actions may be in a given scenario, but won’t know exactly which one(s) have been played.

The Scenario Book is the most important element of Quirky Circuits. The coil-bound book doesn’t just tell you how to play the scenarios, but it also acts as the board for each scenario. I love this. No messing with a ton of tiles. All the information you need is right in front of you. Plus it lets every scenario have its own unique artwork. There is no table of contents, but the book is split into 5 sections. One for each of the four robot characters, and a fifth set of Special Scenarios that have harder goals and one that even uses two robots. The left-hand page of each scenario always contains the same elements: the Goal, board and card Setup, any Special Rules, and Environmental Effects. One of the things I appreciate in this layout is that it always includes the not-so-special special rules, as a reminder about how they work. The right-hand page contains the map and round tracker (amusingly themed as a battery power indicator).

The four robots all have a reference card for their individual rules and card setup, as well as a beautifully sculpted miniature.

Gizmo is one of those robot vacumes that you always see videos of cats or kids on. To carry through with that pop-culture image, there is a cat riding on top of Gizmo as they move around the board to clean up dust bunnies around the house.

Twirl is a robotic honey bee helper, buzzing around a greenhouse to deliver seeds or fruit or whatever else.

Rover is (wait for it…) a robot dog. Because unless you are on Mars, of course that’s what Rover will be. Rover is a good boi and doesn’t bury bones in the sand, he finds them. Specifically, he finds fossils to display in Robotopia’s Grand Museum.

Lefty is a sushi chef robot. Lefty doesn’t move by themselves, conveyor belts move around taking sushi and/or Lefty around the board. Simple, but oddly challenging.

The miniatures of each robot are adorable and paint worthy if you’re so inclined. Because they are intended to be in any sort of specific sale, they can be a bigger and a bit clunkier than many games, making the details easier to mould for a nicer final product. My ONLY problem with the minis is how they interact with the other components. Three of them are designed to hold and carry the pressboard tokens. Rover holds them in his mouth, which is large and handles it well. Lefty has appropriately large claws, that are thick enough to make putting the tokens in them fairly easy. Twirl, on the other hand, has these insectlike pincers that feel like they’ll break. This is a bigger problem since it is very difficult to get a token in without damaging it. We solved the problem by giving up and not trying to force it anymore. Plaid Hat Games could solve it with plastic or wood tokens that have a bevelled edge so they slide in better without getting shredded like cardboard.

I feel like the 8+ age rating is a bit ambitious, but this could easily be a gateway game for a younger or newer player to experience cooperative games. As I said at the start, the game is hard enough to be a challenge for players of all types, but not so hard that it will drive those new players away from the game and the hobby.

I want to see Quirky Circuits 2 with new robots.

I want to see a new scenario book for these robots, a sort of Quirky Circuits version 1.2.

I want an authorized scenario builder that outputs two 8.5×11 pages or a single 11×17 page, and a community archive for people to upload them.

I want more. Period. Just do yourself a favour and pick this up.