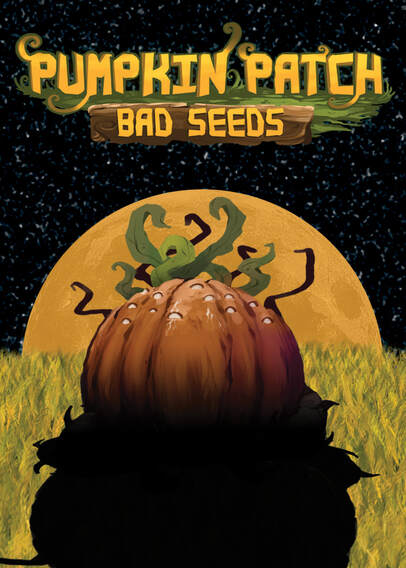 It’s the spooky season again. Yes, I’m one of THOSE people who think Halloween is a season rather than a single night. It’s also a season that lets people determine what it means to them. For some people it’s all about horror movies, the bloodier the better. For others, it’s super scary costumes. For me, Halloween is all about a youthful fun sort of spooky. Garfield’s Halloween Adventure. Rankin-Bass’ Mad Monster Party. It’s The Great Pumpkin, Charlie Brown! The Halloween episode of WandaVision. Stuff like that.

I have a similar taste for Halloween games. I want spooky over scary; fun over fear. Pumpkin Patch: Bad Seeds looked right up my (dark and seemly empty) alley, and I was right.

Pumpkin Patch is a fast and simple tableau/pattern building game for 1-3 players. 1-3 is an interesting player count to make work, but it works surprisingly well here, with minimal changes between player counts.

The game starts with a Baby Boo (#3) on the table, surrounded by four Seedlings (#1). To the side, there is a face-down draw deck and constructed, face-up, “Compost Pile” consisting of one Boo Baby (#3), two Jack be Littles (#2), and three Seedlings (#3). If a player can’t play a card from their hand, they can play the top card of the Compost instead.

For the three-person game, a player will take four actions, in order:

2- Move one of the two Crow cards from one garden plot to another, blocking that plot from having cards played on it. In a two-person game, each player is assigned only one crow that they can move. In a solo game, the crows are each given one of four behaviours (Aggressive, Greedy, Hungry, or Shy) that determine how each crow will move for their action.

3- You can, but don’t have to, discard any number of cards from your hand. In solo mode, you can only discard one card.

4- Draw back up to three cards in your hand. If the deck runs out in a multiplayer game, just reshuffle the discard pile.

Regardless of the player count, the game ends when the Cinderella Pumpkin (#8) is played. If the deck runs out or you can’t play a legal card in solo mode, the game ends. Every Pumpkin from #1 to #8 has a different ability and/or scoring mechanic, and the score is totalled up as you play on a separate card with adorable hollow pumpkin markers.

There is very little not to love about this game. It’s a fast, light, filler game. The art is adorable. The only non-card component, the scoring markers, are well made, and the box is not big enough to fit a real-life pumpkin in the extra space.

On the meh-side, the scorecard is a bit cluttered and unclear, but that’s not a huge problem. There is a solo rule for setup where you mark one of the crows with one of the extra score markers so you can remember which crow always moves first. But the artwork on the two crows kinda already does that, making it largely irrelevant. These are fairly minor complaints though, and the game doesn’t really suffer for them.

This is a delightful game that I suspect will make plenty of appearances on my gaming table over the next month or so.

Tomorrow we will be bringing you a CrowdFUNding Spotlight on Brouhaha Games’ newest game, Hysteria. You can read our Spotlight and you can back Hysteria on Kickstarter until Nov 4, 2021.

Brouhaha Games can be found online at brouhahagames.com or on Facebook at facebook.com/BrouhahaGames.