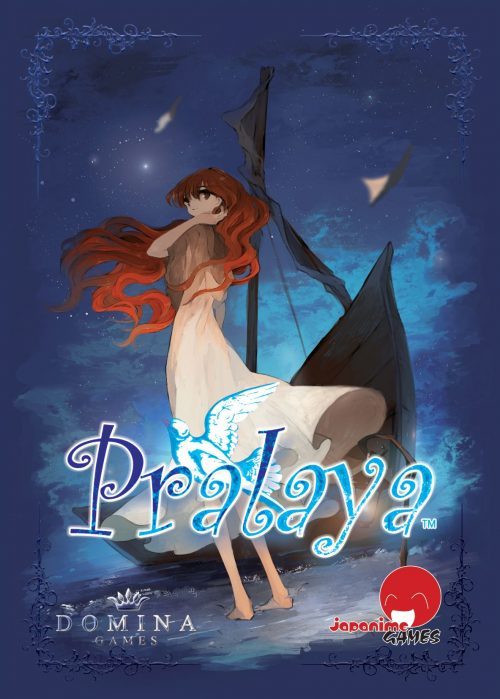 Pralaya comes from the Sanskrit word for dissolution and by extension; destruction, annihilation, and death. It also represents the time non-activity between the creation and recreation of the universe. In the game Pralaya, a fearsome demon broke free from its ancient prison and began to drag the island into the sea, ending the un-named island’s seemingly endless period of cultural prosperity. The island’s king ordered his retainers to gather as much of the island’s knowledge and treasures as they could and flee to the northern lands. The players are those retainers.

Pralaya is easy to learn and fast to play, but there is a surprising amount of strategy for such a straightforward set collection game. The island is represented by a grid of cards that have either a Treasure or an Ocean on it. The first player can spend 1 Vitality to buy a card from the grid, the second player has 2 Vitality, and from there everyone has 3 Vitality they can spend. Among the Relic Cards that can be acquired are Currency cards. These cards are worth points at the end, but can also be discarded to purchase two specific cards, over and above those acquired using Vitality. The first of those cards is a Veda. Coming from the Sanskrit word for knowledge, Veda usually refers to a collection of Indian religious texts, the card gives an additional Vitality to use for Relic Cards.

The other card that must be purchased in this way is the Dhoni. These small boats are often used in the Maldivian islands, in the Indian Ocean. There are several real and mythical sunken islands in the Indian Ocean, giving an increasingly good idea of where the sinking island of the game may have been located. Unlike the Vedas, which always cost four coins, a Dhoni increases in cost for the next player once purchased. Once you buy (More on Dhoni cards in a moment.)

The bulk of the game is a straightforward set collection. A player spends Vitality to take Treasure cards from the island, then replacing them from the deck at the end of their turn. Different Treasures have different effects and different requirements for scoring at the end of the game. Interspersed through the deck are Ocean cards, and when the island has nothing but ocean cards it has sunk and the game ends.

The game ends when the island sinks. You can purchase a Dhoni card, which is a boat… You can probably see where this is headed. If the island sinks and a player didn’t buy a Dhoni, they sink with it and automatically lose. But any players who escaped the island safely add up their score to see who won.

There are numerous different Treasures that score in different ways, most of them are easy to understand. The only real exception is the Demon Pact card. The Demon Pact is worth the number of Demon Statues a player has multiplied by -3 for each individual Demon Pact. A single Pact would be -3, a second 9, a third -27 and so on. Don’t worry if that’s hard to remember, there is a convenient explanation for every card in the rulebook. In fact, the card explanations take up more pages than the actual rules because the game is that simple.

So far I have only been able to play this with two players, and I have a feeling it will play very differently, but be every bit as fun, at a full five-player count. It was an absolute blast.

The artwork is beautiful, but some of it gets a little lost in the cards. That’s not a fault of the cards, specifically, but the style of art is so delicate that I’m not sure any standard sized cards would do it justice.

Pralaya is available on its own and also packaged with Argoat and Miraris as The Domina Anthology. I do have the full set and I’m excited to get a few more people together to try the others out. Pralaya has set the bar very high, but I have little doubt that I’ll enjoy them just as much.

You can check out Japanime Games’ Kickstarter for the Domina Anthology 2 until June 23.

You can find the original Japanese publisher, Domina Games, online at dominagames.com or on Facebook at facebook.com/Domina-Games-310795519075768. (Both in Japanese)

English language publisher, Japanime Games, is online at japanimegames.com or on Facebook at facebook.com/JapanimeGames.