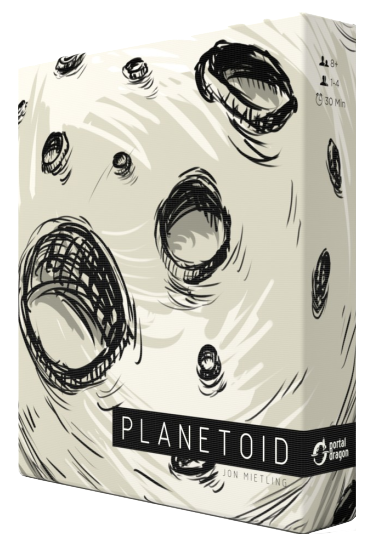 I was surprised and excited when I was given a copy of Planetoid by Portal Dragon. I rarely get the opportunity to see Kickstarter games, nevermind play them. I sincerely apologize for the late review, this game deserves better than to be delayed.

The first thing I noticed was that they clearly achieved all their stretch goals to improve the quality of the product, because the box is huge, and quite heavy. After punching out all the pieces, and storing them in bags by category, I could barely shut the box. (Later, I learned online that the box does close if you put the Planetoid on the bottom, the player boards on top, and sandwich everything else in between.) Baggies are absolutely necessary for this game, as there are so many pieces capable of falling on the floor or otherwise getting lost.

For those who may have forgotten the original campaign, Planetoid is a game about asteroid mining, essentially resource acquisition in space. Normal gameplay is for 2 – 4 players, but there is also a single-player game where, instead of competing against rival mining ships, you are confronted by resource hungry aliens. I never had the opportunity to try a solo game, so I won’t be able to say much about it. The game also has two difficulty levels, Basic and Advanced.

This is not the type of game that you can spontaneously grab off the shelf and play. Set up takes time and effort, but is not so difficult that it becomes frustrating. The Planetoid itself consists of five pieces that fit together jigsaw puzzle style. This is the easy part; the tedious part is when you have to seed the board by randomly placing resource tiles in all the empty spaces. There are 5 resources, Rocks, Gold, Emeralds, Rubies and Diamonds. The rarer they are, the more points they are worth: rocks are worth a single point, gold 2 points, emerald 3, ruby 4 and finally diamonds are worth 5 points each. Next, choose 8 of the 14 possible shipping bonus tiles and place them solo-side down beside the Planetoid. Keep the end of game bonus tiles and energy tiles nearby. Each player gets a player board and a player tile. The player tiles are drawn randomly and determine who gets to play first, or the exact order of gameplay if you want to make things interesting.

If you are playing the Basic game, that’s the whole set up. For the Advance rules, you need to add 4 random System Upgrade tiles (one in each category: Drill, Scan, Ship and Utilities); deal each player 2 Secret Bonus cards, which are end of game bonuses only they know about; and add damage tiles to the energy tiles.

Let’s start with the Basic gameplay. Players use the Basic side of their gameboards, and both the action choices and energy is limited. Whoever got the player tile with the number 1 on it goes first. A player can perform one of three actions on their turn: Scan, Drill or Ship. Scan means you secretly take a peek at one resource tile on the Planetoid, and collect one energy tile. Drill means you take one resource tile and place it in one of the 4 resource slots on your game board. But, you also have to flip the tiles surrounding the tile you took: above, below, left and right, but not diagonally. Ship means you take one or more resource tiles off your player board and keep it in front of you. If the resources you ship home match one of the shipping bonuses (for example, “2 rocks”, or “1 gold, 1 emerald, 1 rock”) take the shipping bonus tile as well. If you have energy tiles, you can perform one Auxiliary Scan or Auxiliary Drill action per energy. You cannot Ship using an energy tile. You can have a maximum 2 energy stored. Auxiliary Scan lets you peek at 2 tiles, but does not give more energy. Auxiliary Drill lets you take another tile, but only if it is next to the tile that was most recently drilled.

Players take turns Scanning, Drilling and Shipping until one of two things happens. Either all of the Shipping Bonuses have been claimed, or every resource tile on the Planetoid has been flipped face up. Once either of these events happens, the current round of turns finishes, and scoring begins.

If you have any resources left on your player board, you get to keep them, but you won’t get any shipping bonuses for them. Each player counts their resources, and whoever has the most of each type gets the End of Game Bonus for that resource type. Your final score is the points for all your resources, plus the points for shipping bonuses, plus the points for end of game bonuses. The winner is the player with the most points. If there a tie, the player with fewer resource tiles wins. Yes, in mining, quality beats quantity. In the unlikely even of a double tie, the winner is the player whose play order was the furthest from Player 1.

The Advanced Game is a bit intimidating, but it isn’t too difficult if you read the rulebook carefully and pay attention while playing. That said, I should warn you that there are a few errors in the first edition of the game. In the words of the game designer, “if there is a difference between what is written in the book and what is on the game tile, trust what is on the tile”.

The easiest way to describe the difference between the Basic and Advanced games is that you have a better mining ship, but it’s a bit more accident prone. In practical terms, you have more actions you can take, and more energy to use, but some of your actions can damage your equipment. If you damage something, you must take an action (Repair or Repair Bot) to fix it.

The rules for energy are very different from the basic game. In the basic game, your first action is free, and you use energy to perform extra actions. In the advanced game, every action costs energy, and some cost more than others. To make up for this, you get energy from two different sources. Solar Energy provides 3 energy tiles automatically at the beginning of each turn. Battery Energy stays in storage from turn to turn, but you can only store 2 energy in the battery. As I mentioned before, some actions cost energy and damage.

I could take an entire paragraph to list all the new actions available to you. It’s easier to just say that there are many more ways that you can scan, drill and ship home your minerals. There is also a new category, Utility actions, that allow you to do things like charge your battery, repair damage, and even upgrade your ship. There is more strategy for the Advance game, because even though you can perform as many actions as you have energy to pay for, you can only perform one action in each category per turn (unless you pay for the Reroute Power action).

The last difference in the Advanced game is the Secret Bonus. At the beginning of the game, each player is given two bonus cards. At the end of the game, but before scoring begins, each player reveals one card. Examples of these bonuses include “the player with the most upgrades gets 4 points”, “players get 1 point for each damaged system at end of game” and “all players get 1 point for each shipping bonus they have completed”. Since the bonuses apply to all players, the strategy is to choose the bonus that is best for you, or one that only applies to you.

Once you have mastered the Basic and Advanced games, you can try the solo game, as well as a few other variant games described in the back of the rule book. These include a simpler two player game with a smaller Planetoid to explore, a “danger game” that adds the solo game aliens to the multiplayer game, and the now common “you can play with 5 to 8 players if you buy another copy of the game”. In this case, there are specific rules for how to play with two Planetoids to explore and mine.

Other than a few errata, and a box that only be closed completely if the components aren’t put away in a very specific way, I have no complaints about this game. It can be a fun and (fairly) easy resource-gathering game, or a more challenging strategy game, depending on what you and your friends are in the mood for. It has a solo mode for when you are away from your game group, or feeling introverted. And it has a combination of game components and play styles that makes the game very tactile and immersive. All in all, I would recommend it.

You can find all of Portal Dragon’s stuff online at portaldragon.com or on Facebook at facebook.com/theportaldragon.