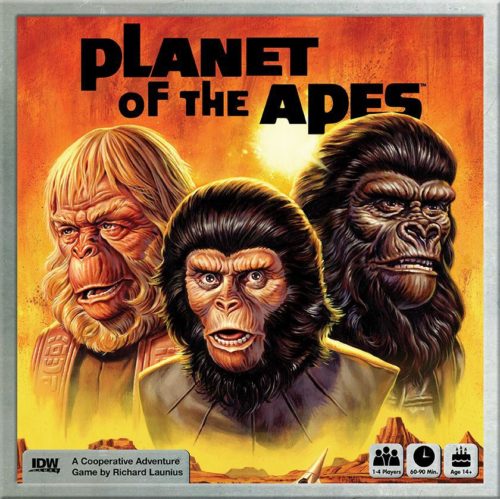 So, when I was younger, I worked in a video rental store. Yes, I’m old. Thank you. As I was saying, I worked in a video rental store. One of the rules was that we could only put trailers or G rated movies on the in-store televisions. Usually, that meant cartoons and rarely the good ones. But fun fact: under the Canadian Home Video Rating System the original Planet of the Apes films are rated G. Consequently I got to watch them a lot. High point for that job really.

Back to the present. IDW’s Planet of the Apes may be one of the most unique and fascinating game concepts I’ve ever played. It’s a cooperative game, that doesn’t just use the Planet of the Apes franchise as a theme, it literally walks through the original movie, scene by scene. Not only that, but the players are not just individuals in the game, but rather one of four different aspects of Col. George Taylor’s personality.

There are seven main scenes to be played through before the final climax. Three of them (1, 3, 5) are minor scenes in which a single (unchanging) card is revealed and resolved before moving on to the next scene. The four major scenes (2, 4, 6, 7) each have an Introductory Card, that sets up the win/loss conditions for that scene, and 12 Encounter Cards that are unique to that scene. The Intro Card will set the scene, including saying where on the Fate Track the Taylor and Ape standees start. Generally, if Taylor advances to the end of the Fate Track before the Ape does, players advance to the next scene. If the Ape arrives first, players usually still advance to the next scene but with a hefty penalty. There is also a Statue of Liberty standee that continually advances on the Fate Track, and if it ever reaches the end the players are defeated.

Once the scene is set up, three of that scene’s Encounter Cards are drawn and placed along the edge of the board. There are a number of actions the active player may take, including attempting to resolve one of the Encounter Cards. To do that they will use a combination of dice rolls and action card, with success or failure resulting in Taylor or the Ape advancing on the Fate Track, along with other effects. At the end of each player’s turn time moves forward, in the form of a circular Day Track. At the sunrise of each day an assortment of effects may activate. Some of those effects may be positive, while others will be negative. Some effects players can anticipate and try to avoid, while others are drawn randomly.

If the players survive all seven scenes, the move on to a final Discovery Scene. This scene has three potential options, and in keeping with the spirit of the game, players are encouraged to not peak at them ahead of time. I have not peaked, nor have I survived to reveal any of them, therefore I have no idea what they are. In saying that, I will still point out that what I am about to say is 100% conjecture: there are three potential Discovery Scenes. The ending of the 2001 Tim Burton movie did not have the same ending as the 1968 classic movie, which also did not have the same ending as the original novel by Pierre Boulle. Three ending, three cards, dare I wonder?

The artwork throughout the game was high quality consistent, both with itself and with other non-live-action products I’ve seen. The components are well made, although having everything on the board except the cards for the current scene is a minor pet peeve of mine. I do understand why that’s how it is, but I still dislike it. Similarly, I know the excessive amount of copyright/trademark notices all over absolutely everything is not actually IDW’s choice. But seriously, Fox.

If you’re lucky enough to get ahold of an earlier run of the game, you’re not just going to get the cardboard standees, but also a set of plastic miniatures. My copy included those miniatures, and they were featured in an episode of our video series, Slinging Paint. (When you’re done reading this, you should go watch it.)

I haven’t beaten the game, but I plan to try again. If nothing else I’ve got a few more of the movie scores that were released since last I looked, and that’s a win too, right?

[Here’s another chance to watch the Slinging Paint video on this game! -dc]