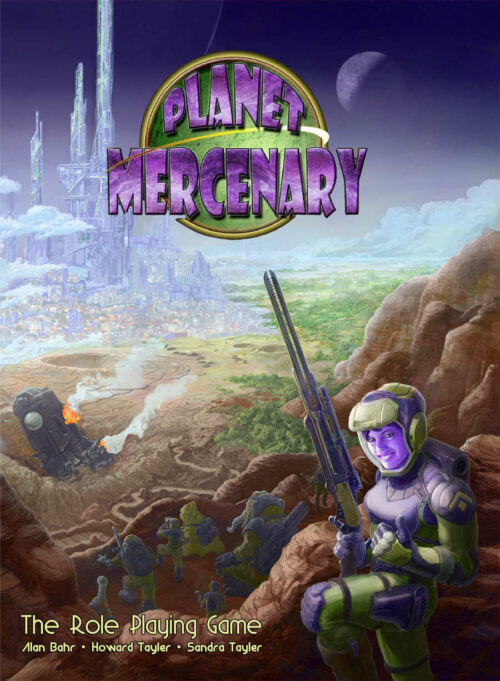 I feel like I’ve won the RPG lottery lately. The last few games I’ve reviewed have been some of the most stellar I’ve read in ages. Planet Mercenary is no different. Actually, that’s not true. It’s something completely different.

Last week I posted a review on Book 13 of the Schlock Mercenary webcomic that Planet Mercenary takes place in, over on Geekorama.net. There are lots of games based on comics, but Planet Mercenary is based literally IN the comic. As in, you aren’t just playing a game about the characters in the comics, you ARE the characters in the comic, playing this game. The game is written from the point of view of weapons retailer Planet Mercenary, as a way for their customer’s hired grunts to learn how to not die in combat, by roleplaying constantly dying in combat.

That combat, and any other skill checks, use the surprisingly simple D63 system. Roll 3 six-sided dice, add the value of your appropriate skill rank, and compare the result to the target number. As simple as that is, how rolls really get interesting is with the “Mayhem Die”. One of every player’s three dice should be easily differentiated from the other two (a different colour, size, or face markings). This die is called the Mayhem Die, and if the number rolled on it is higher than the number rolled on each of the other dice that player must draw a Mayhem Card. The Mayhem Deck consists of 102 cards (plus four blanks that you can customize) that are designed to add uncertainty, and often humour, to an otherwise successful action.

The combination of elegant simplicity and aptly named Mayhem makes the dice rolling more than just a comparison of arbitrary numbers, it makes it another excuse to roleplay. The story really is what’s important in Planet Mercenary. Another way the game encourages this is by using “narrative movement” rather than a map. The Game Chief (the person running the game) describes the location and if a PC can reasonably move somewhere, they can. The other main mechanic that shifts gameplay away from the dice and onto the players is the “Speak First, Go First” initiative order, that works exactly the way it sounds. The player that speaks first, goes first, just like in real life.

Even from a non-play standpoint, Planet Mercenary goes out of its way to make for a fun time for everyone at the table. There are constantly notes throughout the text with helpful ideas to avoid impediments to fun play, including a short section on managing player’s personalities and unique accessibility challenges. The very fact that they even address accessibility puts this game light years ahead of most.

With the “tedious” mechanical details out of the way, let’s take a step back look at the writing. As I mentioned earlier, the Planet Mercenary rulebook is a thing that actually exists in the universe it portrays. Once you get past the rules (which are still written in a consistent and lighthearted way), the items, weapons, armour, etc, are written as if lifted directly out of the Planet Mercenary corporate sales catalogue. The sizable Locations section is similarly written, splitting the difference between tourism guide and corporate franchise research.

Tying all of this together is the “accidental” inclusion of conversational margin notes between the Writers, Editor, Legal, Management, and other Planet Mercenary corporate departments. What starts as your standard, behind-the-scenes, project notes soon develops into a legitimate story that keeps the reader invested in the entire book. Players, and even the Game Chief, will often skip areas of the rulebook, but with this entertaining marginalia, no one will want to skip anything. The only place that becomes less ideal is during the included sample adventure, The Damaxuri Deception. Thankfully there is only one such note, and it’s at the very end of the adventure.

Hypernode Press is slowly building and developing more resources for Planet Mercenary. Besides some fun physical accessories, there’s a PDF adventure that picks up after The Damaxuri Deception, and another that was designed for Gen Con 2018 which I’ve seen musings about being released. The website has an official downloads section, as well as a shared resources section, with a variety of community submitted documents.

There are a few amazing mechanics and details I’ve skipped over the course this review. But ultimately the important thing is that this is a really fun game. I’d easily place Planet Mercenary as one of the top two humour-based roleplaying games on the market today.

You can find all things Planet Mercenary at www.PlanetMercenary.com and more about the Schlock Mercenary webcomic at www.SchlockMercenary.com.