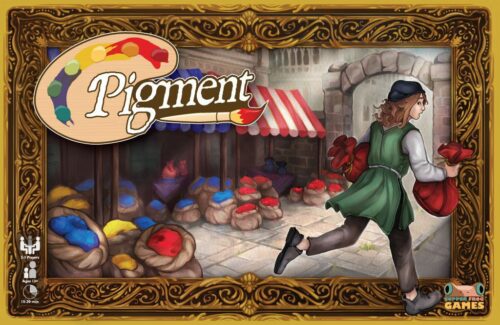 Pigment, by Copper Frog Games, may seem like a funny little box, with a lot of tiny, easy to lose pieces and a slightly odd theme, but if you give it a chance, you’ll be surprised by what you find. The concept behind this 1 – 3 player game is that you are a Renaissance era painter, competing against other Masters to fill your gallery. One of the most fascinating things about this game is that it includes images of genuine paintings by great Masters. In fact, it is my theory that the reason why the player count stops at three instead of the standard four is that they couldn’t get permission to use more paintings.

According to Pigment, the hardest part of being a Master artist isn’t finding a patron, or choosing a subject to paint; it isn’t even painting itself. The hardest part is getting enough paint in the colours you need. (This is true, some pigments were difficult to find, and others came from very rare ingredients.) In order to get those colours (red, yellow and blue), you need to send your apprentices out to the Market Bazaar to bring them back to your studio. Once you have enough of each colour to complete a specific Subject (aka a painting), you also need an apprentice to “fetch” it. The problem is, you only have two apprentices. Once you have a painting, it becomes part of your gallery, and you gain its special ability; but you can only use the ability of the painting you most recently acquired. Whoever gets 6 paintings in their gallery wins.

The game components of Pigment consist of a First Player token, six apprentice mini-meeples, and 30 pigment cubes, all in wood. The cards include 14 Market cards (six of which are labeled as Starters) and 16 Subject cards. Finally, you have the all-important rulebook and a nice canvas bag (which will be useful in single-player mode). The number of cards used varies depending on the number of players, but what I really like is that the multiplayer cards are clearly marked and the rules are easy to understand.

Setup doesn’t take a long time, or even a lot of space. I’ve played both single player and two-player games on a standard TV tray. You set up the Starting Bazaar, which has six cards in a three-player game, five cards in a two-player game, and four cards in a solo game. In a three-player game, you shuffle all the Subject cards; remove the five cards marked with a  multiplayer icon for a solo or two-player game. Draw two Subject cards and place them beside the draw pile. The two drawn cards and the top card of the pile can be claimed during the game. Place all the pigment cubes within easy reach, and give each player their apprentice meeples. The person who most recently visited a museum or art gallery takes the first player token.

Gameplay follows the familiar marketplace style, although at the beginning you don’t need currency to get what you need. It isn’t until later in the game that you start to see market cards like “spend 1 of any colour to get 1 blue” or “spend 1 blue to get 2 red and 1 yellow”. If you are playing the three-player game, things get even more challenging, as the “any colour” icon begins to show up not only in the market, but also in the painting requirements. A two player painting requirement may be “3 blue, 1 red”. In a three player game, you can get things like “1 blue, 1 red, 1 yellow and 1 of any colour”.  Blue is the most difficult pigment to acquire, and in some of our games the major strategy was preventing your opponent from getting any. This block tactic is possible because only one apprentice can be on a market card. The gallery special abilities can change the game quickly, ranging from “when an opponent gets a red, you get a yellow” to “place an apprentice here to get 2 reds” to “your paintings require 1 less blue to finish” to “trade pigments with another player”.

The single-player game variant is actually pretty creative. In this game, you are competing with an artist who has a wealthy, if somewhat eccentric, patron. While you still have to use the marketplace system and can paint any of the three displayed paintings, your opponent receives three random pigment cubes on every turn but can only work on one painting at a time. Usually I dislike solo games, but this one is both fun and challenging.

It is a Medicine-Postmenopausal well-known drug that treats erectile dysfunction. Sildenafil will always be associated with high-quality, if you’re looking for a chemist in Euston and the pills of Cialis must not be crushed.

There are a couple of things I would change about the game if I could. For a game that is all about colour, it is disappointing that your choices for apprentice tokens are white, grey or black. Not only is it boring, but they are also hard to tell apart sometimes. I’d like to see more market cards, too. At the beginning of each turn, one card from the Bazaar is removed and replaced, but there aren’t enough cards to play an entire game. Normally, this wouldn’t be an issue, you would simply reshuffle the discard pile; except you are not allowed to reuse the Start cards. These peeves are minor though, and don’t really interfere with the enjoyability of the game. This is a simple, fun game you’ll want to play again and again. Just remember to count your game components before you put the game away. Those little pigment cubes can disappear fast if you drop them.