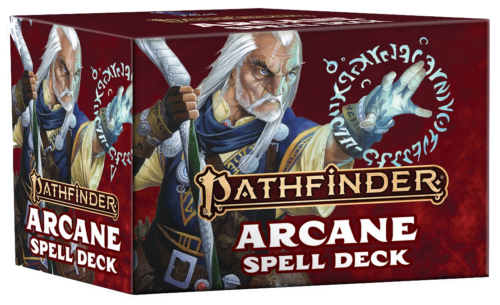 I don’t remember the last time I played a magic-user in anything heavier than a BEER & Pretzel weight RPG. I hate trying to figure out what spells I want and then remember what spells do what. In today’s Accessories And… feature we look at the Arcane Spell Cards, and by extension the Spell Card product line in general, for Pathfind Second Edition.

Not long ago I looked at Pathfinders Bestiary cards. They are oversized cards that can supplement, or completely replace, the Bestiary sourcebook for a Game Master. Some of the creatures even need more than one card to hold the complete entry. The Spell Cards are not that, but they are similar. Rarely does the whole table need to reference a spell, so there is no need for the cards to be oversized, or have unique art on them to show off what they are.

Spell cards are meant mainly for players. They are standard card sized, and in most cases have the entirety of the given spell’s information. Some of the cards, Unseen Servant and Web for example, have the text continued in the reverse of the card. In cases of extremely complex spells, the cards reference back to the description in the Core Rulebook.

There is are boxes available for each magical tradition (Arcane, Divine, Occult, Primal) plus specific Focus spells, with each box including every spell for that tradition that is listed in the Core Rulebook. The cards aren’t numbered, making it easy for Paizo to potentially expand on the sets. They’ve even left some room in the box for exactly that. The cards are organized by level first, then alphabetically, just as they are listed in the Rulebook.

Cards like this are a great resource for players that want to play a spellcaster. If all you bring to the table are the cards your character needs, you have quick access to every word of the rulebook without flipping pages. If the GM wants to double-check something, hand them the card. Another way the GM can utilize the cards is to hand them to a player that may have found a single-use magic item, like a scroll. “You find a scroll that casts this spell.” *hands them card*

Or get fancy with it: “As the only party member who can read it, you open the wax-sealed letter.” *hands them an envelope with a spell card in it that they can tell people about or not.*

These are the sort of resources that makes me, as a player, re-evaluate my choice to not play a spellcaster. Now that you know they exist, maybe they will change your mind too.