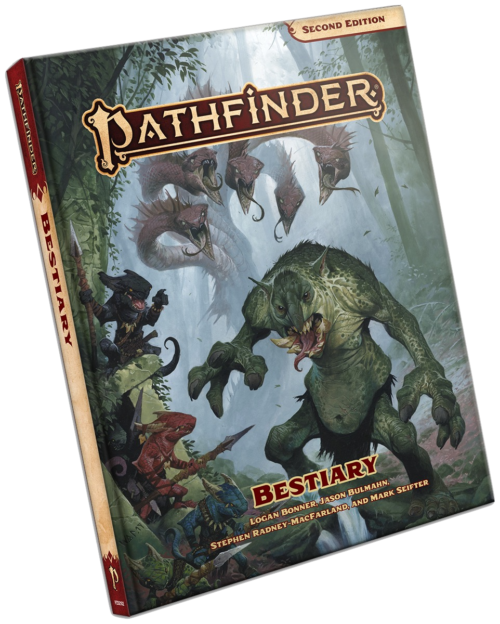 Last time I gave you my initial impressions of the Pathfinder 2e Core Rulebook. I have some deeper dives coming up on various aspects of that tome, but I wanted to look at the Pathfinder 2e Bestiary before that, as this book makes up the duo you need if you plan to run the game for your friends.

This review is sort of backwards for me. Usually I write up a review and at the end tell you who I think the book most benefits and whether you should buy it. But as I noted in my review of the Core Rulebook, it contains no information or statistics for monsters. So if you plan to Game Master Pathfinder 2e, you pretty much have to get this book whether it’s a good product or not. So…yay?

Despite that rather ominous note, at first glance the Bestiary is a very attractive volume. While it isn’t in the bullet stopper league of the Core Rulebook, it still weighs in at a respectable 357 pages, just over half the size of the Core. You won’t find the price tag halved in the same way, though; the Bestiary Is just ten dollars less, at $49.99US. When you compare the value crammed into every page of the Core Rulebook for its price, this does feel like a bit of a letdown. I certainly wouldn’t have wanted another book the same size as the Core, but I feel like another fifty to a hundred pages could have been put to good use.

That said, when you crack the Bestiary open, you can see right away you are getting a good, well-organized book of creatures for your game. The cover is the work of long-time Pathfinder artist Wayne Reynolds, and while it features some pretty standard fantasy/Pathfinder monsters (kobolds, a troll, and a hydra), you already get the sense that things have changed for this edition. The new design of the kobolds stands out in particular. Gone are the yappy looking dragon dogs of the previous edition, replaced with kobolds more reminiscent of someone’s pet lizard or salamander. That isn’t a complaint, I actually find this version of them to be more visually interesting, and I think it gives kobolds a chance at a personality they have lacked, especially standing in the shadow of Paizo’s goblins.

The artwork throughout the book ranges from good to excellent, with a mix of fairly standard designs and treatments alongside some interesting new designs. And I should qualify this by saying the quality of the work is excellent throughout. It’s just that another picture of a roc holding a [INSERT GIANT ANIMAL HERE] in its talons for size reference can only be so good when you have seen it for the second or third (or fifth) time. But every page contains a colourful splash of creature art, all good, some great, and some truly evocative.

The layout of the Bestiary is solid as well. Carried over from the Core Rulebook is the chapter listing in the right-hand margin, making it easy to find your way around. The book opens with all the creatures listed alphabetically with page numbers, which, if it isn’t the standard for monster books yet, should be. Flipping to the back of the book, you will find two similar lists carried over from the previous edition: Creatures by Type and Creatures by Level. Between these three lists, a Game Master should have no problem finding suitable trouble to throw at their party on the fly.

Staying with the Appendix for a moment, it also features detailed descriptions of Creature Traits. I would recommend this as your first stop, after thumbing through all the pretty pictures, because it will help you as you read through the creature stats in the rest of the book. Not as broadly useful but worth tabbing for later are the sections on New Rituals and New Languages.

Fanfare please! Now that we have nibbled at the front and back, let’s stick a fork in the middle. The creature pages are where you are going to see a lot of good design choices coming together to help the Game Master. First, the stat blocks will seem very truncated when compared to what you might be used to in P1e. Not only has a lot of extraneous information been left out, but clever use of the symbols you will be familiar with from the Core Rulebook keeps these packed stat blocks legible. Second, the designers made the laudible decision to either keep all of a creature’s information on one page, or, where that wasn’t possible, to spread it over two facing pages. The facing is key, cutting down on a GM having to flip pages back and forth during combat, making it ever so easy to glance down and quickly see the parts of the stat block or description you have highlighted (What? You don’t use highlighters in your game books? They’re working books, not museum pieces!).

In addition to the highly functional layout and beautiful art, are some handy sidebars featuring useful tidbits of creature lore for each monster. Remember earlier when I mentioned the book could have stood to add fifty to a hundred pages? I feel like it could have been useful to add just a bit more lore, as well as more information and suggestions on how to combine creatures for encounters. That information is more present for some creatures than others, and an experienced GM can certainly extrapolate from the examples given. But for a new GM it would have been nice to spell things out a bit more.

So the book looks good, and you can find your way around pretty easily. What will you find as you poke around? Well, you certainly won’t starve for variety. The usual players are there: kobolds, goblins, dragons, devils, undead of various flavours. And they have a good selection of extraplanar creatures, for all your plane-hopping needs. There are also a goodly selection of extraplanetary monsters, hinting very strongly at the interplanetary adventuring possible in the Golarion campaign setting. And that focus on the campaign setting continues with creatures like the sinspawn and the rune giant, which veteran Pathfinder players and GMs will recognize from early adventure paths in P1e.

If there is anywhere the book falls down a bit for me, it’s here. It tries to be a bit too much of a smorgasbord, but a strange one where they serve the california rolls next to the lasagna. We know there will be other Bestiary volumes; there were roughly a million for the first edition. I think this book would have been better served if they had focused a little less on cramming in a bit of everything, and more on making it a solid resource, especially for new GMs. You could certainly keep some of the Golarion flavour, but maybe save some of the extraplanar/extraplanetary monsters for a later volume.

I would also argue that it is time for monster books to please leave out things like standard dogs, horses, snakes, and other animals. Unless there is something odd or magical about these creatures, they are better served with a stat block list in the Appendix at most, not taking up valuable real estate other, more exciting creatures could occupy. And I would argue that, if they had included that list of basic animals (and maybe even the standard creatures like goblins and human skeletons, for example) in the Appendix of the Core Rulebook, not only would they have freed up some pages for more interesting fare, but the Core Rulebook would have been more useful in getting new players to the table.

So here is where I would tell you whether I recommend this book. And with the obvious disclaimer that only GMs really need it, yes I do. However, unless you really feel you have to have more paper sitting on your shelf, or you’re tired of hearing your lonely Core Rulebook keen quietly to itself in the night, save yourself money and weight and get the PDF. I hate to advise that because I love supporting my local game shops. And in my case I would likely start with PDFs of both books and then grab hard copies later, when I had some disposable cash and after they have incorporated the first few addendums and FAQs into later printings.

So a cool $110US ($30US if you go with PDFs) and you too can play and run the latest edition of Pathfinder. If you’re a player you can rest easy for now, it doesn’t look like there is too much in the pipe for you right away. If you’re a GM, soon your Bestiary will have a pal to keep it company, as Bestiary 2 is due to hit shelves in April. Bestiary 2 seems to focus more on campaign specific monsters (see, they could have waited). I’m hoping that the 2e Bestiaries won’t just be a shuffling and reprinting of the vast range of 1e monsters, but only time will tell.

And as I said in my previous review, if you love Pathfinder you are going to find a lot to love here. There is a good blend of the familiar, the familiar-but-changed, and the “holy-crap-what’s-that?!” to make the read interesting even if you think you know what you’re going to get. But if you are new to Pathfinder, like the Core Rulebook, it will be a job of work to come to grips with the details quickly. You are likely to make some mistakes while running, and the core books are not going to help you as much as I feel core system books should. But that is something we will look at in future articles.

PathfinderSecondEdition.com has links to everything Pathfinder Second Edition has to offer, including printable resources and a Conversion Guide for your first edition materials.

You can find all things Paizo, online at paizo.com or on Facebook at facebook.com/paizo.