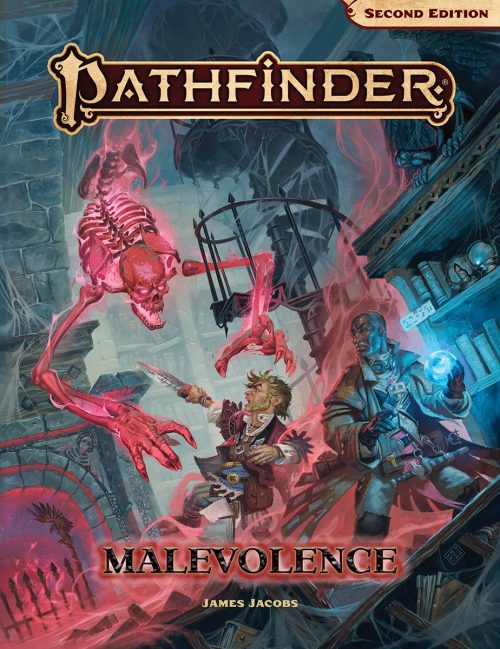 It’s Spooky Season, so we decided to hold back our review for the one-off Pathfinder adventure, Malevolence, for a few weeks to give it that best possible timing. So why now? Well, Malevolence is intended to be a horror adventure. There is a disclaimer pointing out that the GM should have a conversation with their players before running the adventure, but that is not really good enough in today’s age of modern gaming. I will concede that the more structure an adventure has (a format I prefer, to be clear) the harder it can be to integrate some of the safety measures developed in the indie sphere, and although specific tools like an X-Card and Lines & Veils are mentioned in several other Pathfinder products they aren’t mentioned here despite having more than enough space and specific benefit of it here. A responsible GM ensures everyone has a safe and fun time. To be very clear here, don’t be a dick.

As always, “Spoiler Free” does not mean “plot free” and I have always considered the back of the book or website descriptions to be fair game:

“The house has stood abandoned on its lonely hilltop, brooding quietly over the ruins of a once thriving town for decades. No one has lived within its walls since the night a terrific storm flooded the coastal town below—and since a tragedy struck down the noble family that once dwelt within—but now, the mansion has attracted the attention of a curious group of adventurers. What is the truth behind the tragic past that empowers the evil that grips the mansion today, and what might happen to the world of Golarion if the sinister influences that grow within these haunted walls are allowed to build beyond the breaking point?”

Malevolence is a three-part adventure in a single 70 page book, intended for players starting at Level 3. That’s a fairly good level to start at, honestly. If you want to run it on its own, it is fairly quick and painless to create a third level character. If you want to integrate it into a homebrew campaign, just set up the story then drop it in at the appropriate time. Published Adventure Paths often end their first book at around Level 3, so this could be a good way to transition out of an AP storyline if players decide not to carry on with it. It also has the added bonus of theoretically being played mostly by players who are familiar with the rules, making it easier to integrate the expanded Research rules subsystem.

That brings up one of the few failings in this adventure. The Research rules are in the Gamemastering Guide sourcebook. I don’t HAVE the Gamemastering Guide. According to The Adventure Toolbox section of this book, the Reaseach section of additional rules only runs about 2 pages in the GM Guide. Just include the two pages for heaven’s sake. Hell, just paste the whole two pages, graphic design and all, right into this book. Like most Pathfinder rules, they are findable for free in an online SRD (System Reference Document). But, like many Pathfinder rules, they are quite difficult to actually find online in an SRD. I have no particular way to confirm the completeness of this entry, but here you go.

The three Chapters to Malevalence are great, they provide so much more than a hack and slash dungeon dive, which this location very well could be used for. There are multiple easter egg clues, puzzles, and of course terrifying encounters.

As I mentioned earlier, the Adventure Toolbox section greatly expands on the previously published Research subsystem of rules. It also includes the details of the unique magical items that appear in the story and several bestiary entries.

It is common to print a map on the inside covers, but since much of this adventure takes place in a somewhat generic mansion, Paizo also released the two main floors of Xarwin Manor as a separate flip-mat. Like all of their flip mat products, the Malevolence map is coated in sucah a way that you can use wet erase, dry erase, or permanent markers on it without issue. If you use a permanent marker, simply trace over it with a dry erase marker, wait about 10 seconds, and the ink wipes right off. It ois a terrific map to have, even if you never play the adventure itself.

An additional reason to have held off on this review is the chance to point out that another horror-themed adventure, Night of the Gray Death, has just been released this month. The two aren’t playable directly back to back; Malevolence ends with the characters around the 6th Level while Grey Death starts with 16th Level characters, but that gives groups who have already surpassed levels 3-5 the chance to have their own spooky encounters.