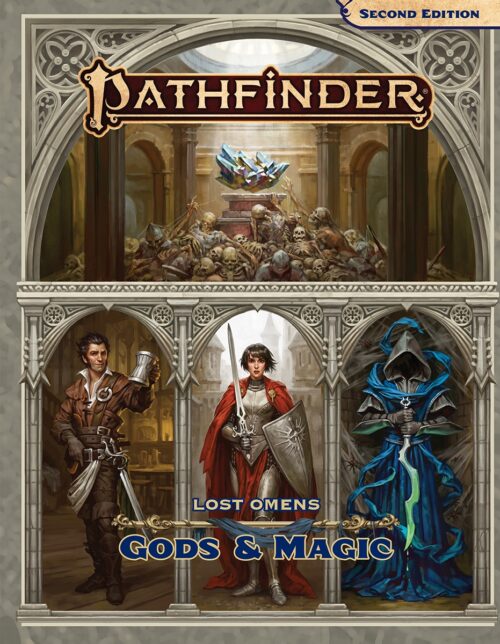 I once had a friend ask me “Do you just read [RPG] rulebooks for fun?”

Yes, actually. Yes, I do. If you’re reading this, you know I obviously also review them. But at the end of the day, yes. I legitimately enjoy free reading RPGs. Read an RPG in Public Week is basically a holiday season for me, not unlike Free RPG Day, International Tabletop Day, or Jólabókaflóð. So when something like Lost Omens crosses my desk, I’m pretty happy. The best part is that Lost Omens isn’t just a sourcebook. Lost Omens is a series of sourcebooks focused on the story more than the stats. These quarterly releases from Paizo succeed their first edition Campaign Setting (and even earlier Chronicles) line of releases.

If it were full of tables and stats, “Gods & Magic” would probably the LEAST useful book to me as a player, since I almost always avoid spiritual and spell-based characters. Reviewing things you prefer to avoid can be a challenge. But once I realized what I had gotten into with a Lost Omens title, I enjoyed the expletive out of it. That’s not to say there are zero stats, but we’ll come back to that.

The book starts with a brief overview of faith in the Inner Sea region of Golarian and some ideas for integrating the contents of Gods & Magic into your characters and campaign. From there it covers an expanded look at the 20 Core Deities that appeared in the Age of Lost Omens chapter of the Core Rulebook. In that chapter, these gods were covered as little more than a footnote, with six descriptions to a page. Here they each have a two-page spread with full art and covering as little of the previous information as possible. The most important entry, or at least most timely, is on Gozreh who’s worshipers play a major part in the first chapter of the Extinction Curse adventure path that was released about the same time as Gods & Magic.

The Gods of the Inner Sea chapter then continues with 20 Other Deities. Because these lesser known gods were not in the Core book, they have a slightly different stat block of information, blending the information that would have been covered in both volumes. To be perfectly honest, I found these gods to be more enticing than many of the more “important” ones that preceded them. These two sections could (and maybe should) have been separate chapters, but it’s not the end of the world the way it is. The first 20 are alphabetized and the last twenty are separately alphabetized, so it’s reasonably easy to know when you’ve switched sections.

Even more enticing to me was the Demigods and Other Divinities chapter. Maybe it’s the same inclinations that draw me away from spiritual characters that draw me towards the little guy. If you can use the term “little guy” on a cosmic scale. It is also the chapter that had my kitchen table completely covered in open sourcebooks. You may wonder how that’s possible since there are so few second edition books available. These entries are mostly grouped in two-page spreads, with multiple short descriptions. Some of them I’ve never heard of, or if I have, they haven’t stuck in my head. Then I crossed The Horsemen. Well then. I go toodle my way over to my first edition books, so I can compare their entry in Bestiary 6 to this new information, then the Archdevils in the same volume. Oh right, some of the Great Old Ones were in Bestiary 4. THIS is one of the many reasons I prefer physical books. I don’t have enough screens to work like that with PDFs. That stereotypical image of a wizard working, surrounded by piles of open books in front of him. Ya, that’s my process. But I digress. My point in all that is that while these entries cover a ton of ground, the first 10 years of Pathfinder can still hold a bevy invaluable resources.

I started this review by saying this wasn’t a book about tables and stats, and I stand by that. Most of the things I’ve talked about DO have stat blocks, but they are there mostly for consistency. It isn’t until you reach the Character Options and Appendix that you start getting more mechanical stats. Things like new Spells or Feats need to include all the mechanical details for implementing them. This is even more true for new Items and Weapons. That’s just how those things work.

I had some initial misgiving about Gods & Magic, but when I finally closed the cover and put it up in my library, I’m glad I have it, and I hope to learn more lore from the Age of Lost Omens as time goes on. In fact, I now desperately want to have a character who can cast Whirling Scarves and is armed with a Bladed Scarf… and maybe likes the Golarion equivalent of Jelly Babies candy.

If you are stuck at home and jonesing to play some Pathfinder (or Starfinder)? Well, have I got good news for you! Since we are ALL stuck at home, the yearly Paizocon has moved online! By the time you read this you’ll be able to sign up for online games over six whole days, May 26-31.

You can find out more about Paizocon, Pathfinder Second Edition, and everything else Paizo related online at paizo.com or on Facebook at facebook.com/paizo.