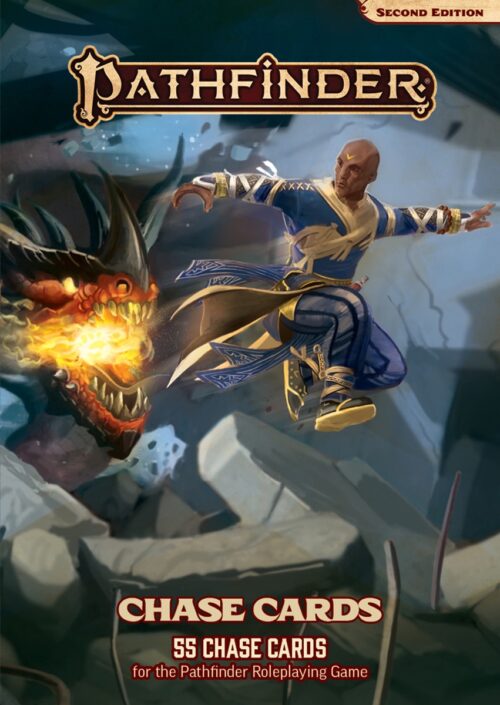 Recently, we did a review on the Starfinder Deck of Many Worlds. Well, it went so well that we’ve decided to make it a semi-regular thing. So welcome to the first official “Accessories and…” feature: Chase Cards for use in Pathfinder.

Chase cards are a great way to visualize, and somewhat randomize, a chase scene. Each card represents an obstacle that the Player Characters need to pass. They are designed to adapt the rules given in the Pathfinder Gamemastery Guide… the… I don’t have that book… Well, that’s what System Reference Documents are for, right? Not really, they aren’t the most user friendly things (nor are they particularly intended to be) so let’s just see how this goes.

The answer was it went just fine. The included rules are printed on two double-sided cards and give all a GM needs to competently run a chase scene with or without the cards.

Each obstacle has a pair of Difficulty Checks rolled against a specific stat to earn “Chase Points”. Usually, a party needs as many Chase Points as party members. Although a Critical Success roll erns two Points, letting the party advance faster. If a player wants to use a different stat, or perhaps a spell, to get past an obstacle the GM should allow it. It may even warrant advancing without a check at all. For example tho pass a Cramped Passage requires a DC17 Acrobatics check to squeeze through, or a DC15 Perception check to find a better route. Personally, I would take the opportunity to deal out new obstacle cards representing that “better route” branching off. Maybe that new route changes the environment of the chase. Say you were in an Urban chase setting and you deal out Underground obstacles for the new route.

The group doing the chasing starts with a marker to the left of the chase cards and will start at the first obstacle. The group being pursued starts on the second obstacle and will go first in the initiative order. In either case, the groups act together with the players taking their turn in whatever order they wish. The non-player group will always advance at a steady rate of one obstacle each turn. A chase usually ends when the pursuing group catches up, or when the group being chased passes the final obstacle or advances to three obstacles ahead of the other group.

I really like these cards. They add an enjoyable change to how a “normal” scene is played out. The rules are clearly explained for those of us without the full rules from the Gamemastery Guide, and quickly enough to sum those rules up for the players.