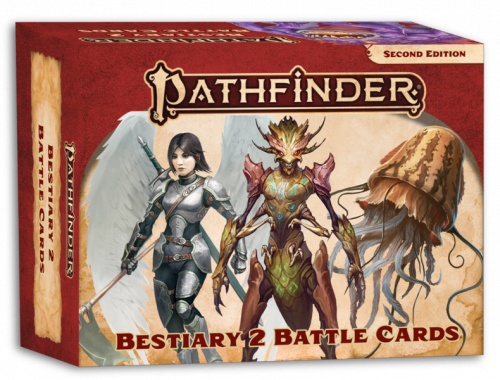 It’s time for another “Accessories and…” spotlight and this time we are looking at the Bestiary 2 Battle Cards for Pathfinder Second Edition. These oversized cards can be a great addition to any Game Master’s toolkit, whether they are used in conjunction with or instead of the Bestiary 2 sourcebook.

Not much has changed with this set of Battle Cards compared to the first set, outside the obvious. But since this set would have already been well into production when I looked and the first cards, that’s not particularly surprising.

Like the previous set, the front side of each card bears a portrait of a specific creature without labelling what it is as to what the creature is, since the players don’t always know what they are facing. The reverse of the card has a complete stat block for that creature, exactly as it appears in the Bestiary 2 book.

Due to local lockdown requirements, I don’t have access to many of my gaming supplies, specifically my Pathfinder supplies, so I’m stuck with my memories and previous reviews. This is weird for me, since I would normally be surrounded by them so I could crossreference things. For example I know there is more art in these cards than in the book, because the Bestiary books often combine similar entries, whereas every entry has its own card here, each with its own art. I just can’t confirm examples. (although I suspect the Oni might be one of them.

The other thing I wish I could double-check was a note I made about wanting to see a “card 1 of 2” in the fine print at the bottom of those cards. this set DOES say “Continued on card #” at the end of the text of the first card and “NAME continued from card #” at the top of the second, so I wish I could see if that was me being picky or an actual change for this set.

The other thing I mentioned in the last set jumps out at me even more so in this set. I really wanted, and still want, some sort of page reference to the appropriate entry in the book. These cards don’t include any flavour text or details beyond the mechanical stats, so it would be nice to have the ability to quickly find that info if you have both. Why that jumped out at me this time is because there is no indication of which Battle Card set a card is from. That’s REALLY weird to me because even the tile sets have a notation about that. Again, I don’t have access to my Spell Cards or Chase Cards to compare those (grumble grumble). But as a whole Piazo is ridiculously good about those notations in most of their products, so it’s a bit odd they didn’t do it here.

All told, these are a great tool for many GMs. The cost is comparable to the full book, which isn’t insignificant, so (unlike the book) I wouldn’t recommend them for the casual player. But if you run games, they are definitely worth considering.