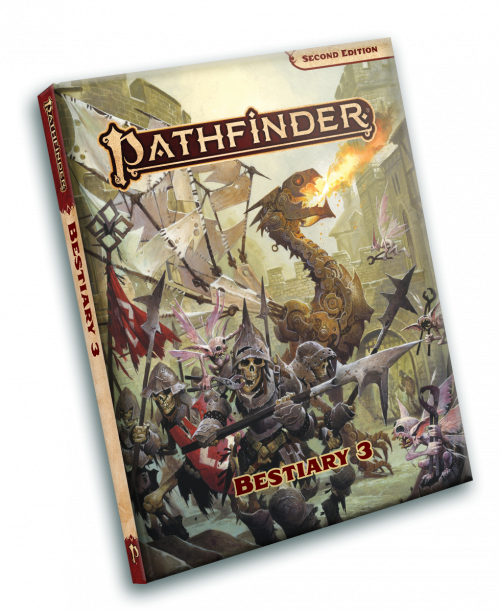 No matter how many times I say it, it remains true. Whatever you call it, Bestiary sourcebooks are always some of my favourites. After running amok with Paizo’s Alien Archive 4 and Alien Character Cards, having Bestiary 3 land on my desk was a treat and a half.

Interestingly the timing of this also left me continuing some of my thought processes from AA4. Specifically: plants. Unlike that review, however, I’m not even going to try to hold back my enthusiastic imagination. Plants, plant spirits, and plant people, are nothing new to roleplaying games, nor to Pathfinder. But where AA4 had my mind planting a garden, B3 has it wandering a very strange forest. Ghoran manipulators, the fungal myceloids, several types of leshy, new arboreals, and the imperial forest dragon all hidden amongst the trees. All overseen by the lesser deities known as green men.

Obviously, there is way more than just flora in the book. Artificial creatures abound like terra-cotta warriors, fun animated objects, a whole section of clockworks, and even an andriod. Yes, an android. It seems a bit odd, but Pathfinder was exploring the stars well before Starfinder was ever a thing.

The largest section, by far, is the imperial dragons. These Chinese-inspired dragons are mainly found in Tian Xia, Pathfinder’s Asian analogue. The cultural and mythological disparities between dragons in European and Asian traditions are drastic, and I’m thrilled about this inclusion. Similarly, I often find the other creatures and spirits of Tian Xia to be some of the most fascinating. Thus far in Second Edition, there hasn’t been a lot of focus on Tian Xia but the groundwork is there in things like the Bestiary series for when they do. (There is also a reasonable amount of setting information from First Edition, that will be largely still accurate in Second Edition.) I also want to take a moment to acknowledge that I am viewing these entries through the lens of a white-guy-of-a-certain-age, whose love of folklore and mythology came from nearly exclusive euro-centric studies because that’s what was available to me as a child. No matter what, I love pulling out a creature or character and comparing it to its real-world source material, full stop. (If I had the time, that could be a thing… hmmm.)

Speaking of my love of real-world folklore, I would be amiss if I didn’t also point out that our good friend Krampus didn’t wait for Bestiary 6 again in Second Edition. I first encountered Krampus while part of a touring show in Europe over the holiday season, well before he came into vogue in North America, and have been enthralled with him ever since. Through sheer chance, I’m writing this review without access to my usual library of books, so I can’t easily compare the First Edition and Second Edition entries. (Which is driving me nuts, for the record. There are options I could avail myself of, but they would mostly throw off my writing process more than the annoyance of not comparing.)

Beyond the creatures, there is also all the ancillary stuff you would expect in a Paizo product. A three-page Table of Contents, a detailed three-page Introduction, and a nine-page Appendix with more lists and explanations than you can shake an improvised melee weapon at.

You almost have to work at it for me to be outright annoyed at a Bestiary-style sourcebook for a game (although it HAS happened). But regardless, in my mind, Paizo tends to be the gold standard which I compare other system’s books against. Bestiary 3 is no exception to that mental standard.