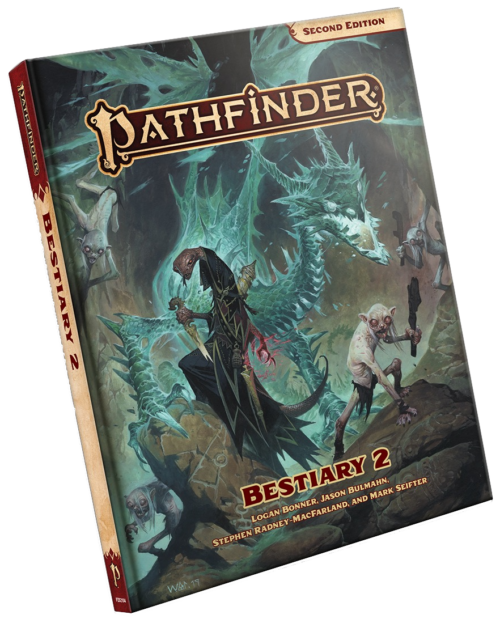 Way back when Starfinder was a just a Starchild, I made an observation about the place of Bestiary sourcebooks in my review of the first Alien Archive. It’s a statement that holds true for every such volume, including the new Pathfinder Second Edition Bestiary 2.

“One of the more interesting books to flip through in any RPG game system is the inevitable compendium of creatures that players may encounter. Whether they call it a “Creature Codex”, a “Bestiary”, or my personal favourite “Even More Things To Kill and Eat”, just the smallest a glance at the pages of these tomes will give new players an idea about where that particular game could take them.”

If you pick up Bestiary 2 by itself, you’ll have a completely usable listing of hundreds of creatures to foist upon unsuspecting adventurers. If you want to dig deeper there are a ton of resources that you can use to do so. If you’re a long time Pathfinder fan, you probably already have many of those resources in the form of first edition books. I mentioned this in my recent look at Lost Omens: God & Magic, in regards to the Horsemen. The stats, and how they are presented, are very different between the two editions, but Second Edition is really just a continuation of the original. Some creatures will have evolved, but many more won’t have. A great example is with psychopomps.

Part of that comes from the difference in how information is presented between editions, as well as the physical page layout. But I suspect there is another reason as well. Over the course of 10 years, Pathfinder released six Bestiaries, and hundreds of other books, with thousands of creatures. Pathfinder Second Edition now has the challenge of not only continuing to bring new, fresh, ideas to the gaming table but also integrate all that history. One of the ways they seem to have done this is to reorganize things to fit more creatures into the same page count. The first edition Beastiary 4 & 6 had 222 and 256 creatures respectively. Second Edition Bestiary 2 has 333 with Bestiary 1 having a visibly similar number (I didn’t bother counting). Now that’s pure conjecture, but it makes sense. First edition books are still widely available, so why re-cover more information than necessary? The long time players already have it and new players won’t notice it isn’t there, or can still get it, and get more bang for their bestiary buck.

Want to go even further down the comparative wormhole? The Witchwyrd have always been known to come from beyond Golarion. So where else would you expect to find more information than in the Starfinder Alien Archive? The most interesting place to look for more background on many Pathfinder creatures is in real-world legends and myths. But this isn’t always as useful as you might think. If you look at Blodeuwedd in Pathfinder and the Blodeuwedd of Welsh legend, and you’ll find only the most superficial likenesses. If you look at the behir, it is remarkably comparable to the Scottish beithir, to the point that a GM could easily create a decent chunk of an adventure around the combined folklore.

A few short days after this goes live, Paizo will be hosting six days of online gaming with PaizoCon Online, May 26-31. Sign up and you can potentially see some of these creatures in action for yourself.

You can find out more about PaizoCon Online, Pathfinder Second Edition, and everything else Paizo related online at paizo.com or on Facebook at facebook.com/paizo.