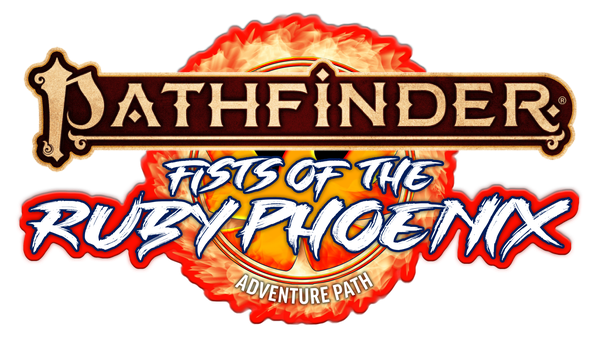 Disclaimer: I have not played Pathfinder itself in years now. This review will not be too heavily focused on game mechanics, but rather on the general storyline outlined in this part of the Adventure Path.

My first impression of this guide is the mere simplicity of the premise. The first page says it is intended for level 11 characters, however, with something as simple as a combat tournament, seeking treasure, I could see this used for lower level players with the creature stats changed around. This storyline sounds like one that could also work for a one-shot session, or more accurately, a few short sessions.

After all, we all know that one-shots take place over the course of a few sessions.

At first glance, the Fists of the Ruby Phoenix seems like it is meant for those who just want to brute force their way through, but upon doing a read through, it has shown itself to be much more than that. Sure, the players could so choose to power through this and not talk too much of anyone if that is who they are, but there is enough lore to keep any player engaged.

Amusingly, there is even one character that seems to be designed solely for the players to like them!

Still, one cannot ignore the fact that combat plays a critical role in this Adventure Path. After all, the very premise is that there are groups of teams competing to participate in the Ruby Tournament. The assumption is that the players survive that far and make it into the tourney, where they must fight further to reign victorious. Of course, there are alternative physical challenges to avoid some combat, but characters that prefer a more pacifist route likely will not do well here.

From what I have been able to read, there is a decent mix of structured versus non-structured chapters. The first chapter, in which the players get themselves settled into the island, is fairly decently structured, complete with maps and an NPC guide. It really is the time when the groundwork needs to be laid, so it makes sense to have such a strong structure here.
The second chapter, on the other hand, is almost not structured at all. I won’t say too much about the storyline here, as we don’t need spoilers, but it is the qualifying round for the tournament. The guide provides a few maps of terrains, as well as the stats for the various opponents, but that is about it. The Adventure Path suggests various things that the players could encounter, but there is a lot of space that could simply be empty space, space that the DM may need to improvise some in.

Take it as a blessing or a curse, I can’t help but be curious to hear how something like this would go over with various parties. Mind you, despite the things I have said almost in complaint of the lack of structure, there are a few specific events that take place, though I imagine those become optional if a party simply does not care. Is that not all tabletop RPGs, though?

The third chapter finally shows some time for the diplomats! There is a rather significant part of it dedicated to impressing certain individuals, but of course, we also see a variety of physical challenges. This chapter was the one I personally found the most engaging, as it had both structure, and far too many ways for things to go wonderfully, horribly sideways.
Overall, I can say that this path has a little bit of something for every party, save for the pacifists. I would not say this is good for those who are diplomatic and fighting-averse. However, those who are confrontational, or those who like a good treasure hunt.

My main complaint, right now, is that this was only Part 1 in the full adventure! The proper Ruby Tournament starts in the next book, which is terribly frustrating, even if it is understandable. At the same time, the right DM could say the events of the last chapter were the climax of the story.

What are my closing thoughts on this Adventure Path? I can say I would recommend this to certain types of parties, even if the groups I tend to play with are far from said recommended group. Just because I am not in the target demographic does not mean it is not enjoyable, though, and I cannot help but imagine the inevitable ways this adventure would go sideways. The guide does provide enough track to get back on track, though, no matter how lost you get!

Bailey is a vintage- loving author who likes to joke that she has an 80 000 year old soul, as her Twitch followers can attest. She spent much of her preteen and teenage years playing Descent, Shadowrun, Pathfinder, or whatever other tabletop RPG the GM found that week. She later turned that creative energy into writing, and now has multiple books published. Despite focusing on her novels, she can never quite resist the call of a new character or plot idea. You can find her on Facebook, Twitch, Patreon, and buy her books on Amazon.ca.