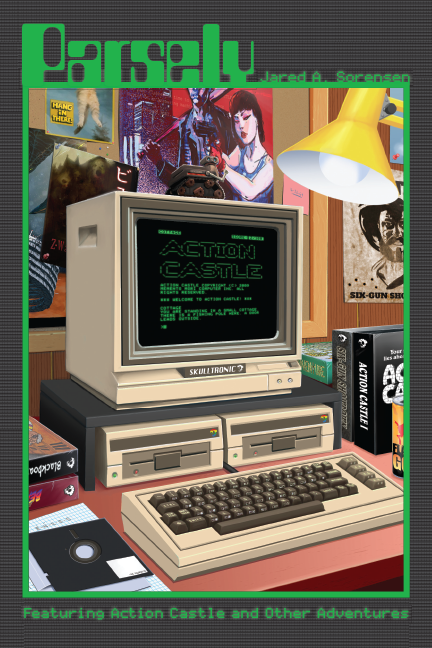 There is an easy way to determine if someone comes from a certain generation, the one who lived through the beginnings of the computer age, before the internet, before MMORPGs, before high definition. All you have to do is say one phrase and see if they flinch. And those words would be Text Based Adventure Game. Computer games without video, without controllers, without sound. The kind of game where you have to guess what the commands are, and where the computer can get pretty danged snarky if you try something that doesn’t compute.

My personal first experience with text only games was Hitchkiker’s Guide to the Galaxy. In the game, you start out from the very beginning, with the scene where Arthur wakes up to the bulldozers. The first thing you need to do, before you can do anything else, is to get rid of your headache using the pill you find in the bathroom. But because is Douglas Adams we are talking about, you weren’t allowed to type in Take Pill, or even Take Asprin. No, every single time I restarted the game, I had to spell out the command Take Analgesic. And later on, if you did not successfully get a Babel Fish into your ear within a certain number of turns, you wouldn’t be able to understand what anyone says to you for the rest of the game.

Parsely is a game system inspired by those games. You can’t really call it a role playing game, because there are no characters, no skill checks, no experience points. If you were to use modern terminology, I guess you could call it an Escape Room Game. The name comes from parsing, the system by which a computer program analyzes language. In the game, there is one person who is the Parser, who is actually pretending to be a computer, a 1980s computer no less. The rest of the players all take turns being the game character. The game is cooperative because every action occurs to every player. That means if one person picks up a sword, everyone has a sword in their inventory; and if one person drops the sword into a hole, then no one can use the sword. Players use simple commands, like Go North, Examine Room, Talk to Princess or Fight Troll. The Parser can have fun by misinterpreting commands or being deliberately annoying. The art of giving hints without being horribly obvious is also an important skill. It’s all about presenting the puzzles in a way that they are neither too easy nor too hard.

The book, which is a hardcover by the way, starts out with the story of how the game was invented, continues on to give general rules and advice on how to be a better computer, before diving straight into the game scenarios. Some of my favourite bits of advice include “be cruel but fair”, “be consistent” and “don’t try to be funny, just listen and take advantage of what you hear”. There are 12 games to play, with a wide range of genres and difficulty levels. Whether you like dungeon crawls, sci-fi, haunted houses, Old West adventure or monsters, there’s something for you to try.

The book recommends getting to know a particular game before Parsing it for a group. This prevents things from slowing down, and reduces the risk of the Parser making the game impossible to win because they forgot to read a certain phrase, or turned to the wrong page.

Our test game was quite enjoyable, for both the Player and the Computer (the other people in the room chose not to play). It was fun for both of us, for different reasons. If you’ve always wanted to be a dungeon master, but aren’t ready for a million rules, this would be a great start. And if you want to relive some of the best/worst moments of gaming history, or experience them for the first time, you can do that too.

You can find Memento Mori Theatricks online at www.memento-mori.com or on Facebook at facebook.com/mementomoritheatricks.