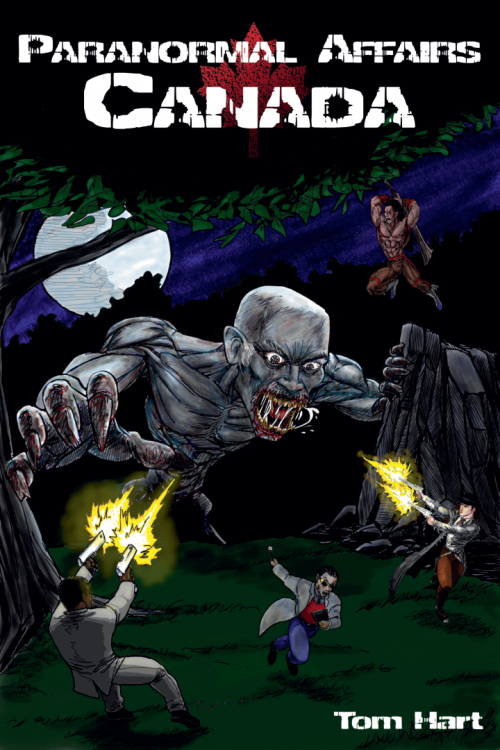 This is better suited for a closing paragraph than an opening one, l but want there to be exactly zero question here. Paranormal Affairs Canada checks just about every box possible for me.

✅ Accessible rules
✅ Abundantly draws from real-world myth and lore
✅ Treats the real-world elements with respect
✅ Well written
✅ Interesting or unique subject matter
✅ I have to put it down because my mind has wandered into the game’s world and can’t get back out.
✅ (bonus) It’s Canadian

Is the game perfect? Far from it. I’ll touch on improvements later, but they mostly boil down to subjective opinion, not actual faults in the game itself.

So what IS Paranormal Affairs Canada? PAC is a secret department of the Canadian Government, that mostly recruits its agents from the ranks of CSIS (Canadian Security Intelligence Service, pronounced see-sis), but also recruits skilled individuals who have had extraordinary paranormal encounters. Think a Canadian Men in Black, and you’ll be close enough.

The primary objective of PAC is to maintain “The Veil” on Canadian soil. The Veil is a centuries-old peace treaty between humanity and vampires of Europe. As the colonial powers expanded their territory, with them inevitably came the European supernatural element. Eventually, the Obsidian Accords which governs Veil expanded to a global effort to keep the secret peace and separation between the societies of humanity, the collective supernatural races, and eventually even extraterrestrial visitors. Many important moments in human history are “suspected” to have been a response to attempts at “Lifting the Veil” and revealing these parallel worlds.

There is a short section that covers this history in detail, and the modern organizations (on both sides of The Veil) get an even longer section. But I’m starting to the middle with those sections. Before the book goes into the world-building, it covers usually-human archetypes, playing as a monster, and the various skills and stunts that a player can choose from.

Now here is where I start having a minor issue with this book. Paranormal Affairs Canada is not a fully stand-alone game, nor is it a full “core rulebook.” Paranormal Affairs Canada uses the Fate Core system. Fate is a comparatively rules-light engine that is actually incredibly easy to learn and even easier to find at little or no cost. Evil Hat Productions offers the Fate Core System, Fate Accelerated, and Fate Condensed rulebooks, and MANY other tools, digitally, as Pay What You Want on DrivethruRPG, and the PDF of this book has frequent embedded hotlinks to appropriate pages on the Fate SRD (System Reference Document) website.

The accessibility, and cross-compatibility, of Fate is one of the things that makes it an appealing option for designers of roleplaying games. It is not uncommon for games powered by Fate to do exactly what Paranormal Affairs Canada creator, Tom Hart, did with this game. They add what they need and generally leave the heavy rules lifting to the official documents. I want to be clear here, there is nothing wrong with that choice. But it’s not a choice I like. I have obtained a TON of Fate materials over the years. But it’s not a system I have had many opportunities to actively PLAY. In fact, I don’t even own a set of Fate Dice, despite also being easy to obtain, improvise, or get a free app for. (I have two specific colour combinations that I want, but can’t find them as singles. But I digress.) My point is that what has been done here is pretty standard. But I can’t help but wish for less Fate-standard, and more standalone. The game that comes to mind first for me is Vurt by Ravendesk Games. Vurt uses the Cypher System. Monte Cooke Games has put out numerous Cypher books that are structured just like Paranormal Affairs Canada, and again, nothing wrong with that. But Vurt is completely standalone. You pick up the Vurt core rulebook and the only book you need is the Vurt core rulebook. It’s all there, and I suspect it wouldn’t have won nearly as many awards that weren’t the case. That’s what I hoped for when I first opened Paranormal Affairs Canada.

Because the Fate Core rules are separate, the Running the Game section is noticeably very short. It’s short enough to just skip ahead here, and mention the two adventures included in the book: a shorter Sample Adventure and a longer, probably multi-session, adventure called Tawiskaron Rising. (Neither of which I’m going to spoil in this review.)

Tawiskaron is a deity from the traditions of the Anishinabe, Wyandot, and Haudenosaunee First Nations. In fact, the Deities and Paranormal entities that PAC faces are all drawn from real-world traditions and lore from across the globe. They have managed to keep most of the important details accurate to the source material for most of the bestiary section. They do take a few liberties, such as connecting Strzygas (Slavic), Manananggal (Philippino), Estrie (Jewish), Baobhan Sith, Answang Vampires (Philippino), and the Alukah (Middle Eastern/Jewish), all as different species or offshoots of the Common Vampire. The “common” vampire in this game is the modern western idea of a vampire, with their own very hierarchal society that is commonly on display in pop culture.

The idea that the “common vampire” are the vampires that evolved from the European concept is not intended to say that the European vampire is “better,” but rather that there are simply more of them and that over the course of history, well before other continents were colonized by Europe, vampires spread and evolved, not unlike humanity did.

Colonization and cultural appropriation is an important conversation to have in general, but specifically in the TTRPG space. It should be noted that I am a straight-presenting cis white male and I have to acknowledge the privilege that comes with that identity. Creator, Tom Hart, comes from a place of similar privilege and has taken specific actions to address that. He has gone to great lengths to show the diversity within Canada, respect for the traditions of other cultures, and he hasn’t backed away from confronting difficult social issues without forcing them down player’s throats. He also specifically hired an Indigenous Sensitivity Consultant to review the project, as so much of it centres around the many First Nations of this continent. For our readers from elsewhere, The Government of Canada created a Truth and Reconciliation Commission to help address the past and guide our country to a better and more respectful future. As best as I can see, he has worked exceptionally hard to feature and respect the traditions of the Indigenous people of this land we live on. My knowledge base of Indigenous lore is admittedly not as great as it is for some other cultures, but I always enjoy comparing in-game lore to real-world lore and on top of trying to keep the two reasonably in sync, the back of this book has three pages of bibliographical references so anyone can learn more. I LOVE that!

Aside from my desire for a standalone product, my only other big issue with Paranormal Affairs Canada is in some of the formating. I would have liked to see a bit more attention given to the page layout. For example, the template stat block for The Cop archetype is at the top of the page for The Hunter archetype. The Hunter’s block is at the top of the page for The Investigator archetype. There are similar issues with the bestiary section. The bestiary entries don’t cross over pages in the same way, but the occasional single-page entry means that what should be a side-by-side two-page layout that is easy for the GM to use, becomes having to flip between front/back pages. These details are not the end of the world when you are scrolling through a PDF, but if this eventually goes to a full print run, it would drive me nuts. The PDF filename specifically says “v1” so my assumption is that there may be some cleaning up for a “v2” that will happen down the road.

Overall this is a GREAT game from top to bottom, exactly as it is. A few adjustments and it could be mindblowing. So definitely check it out!

You can find Paranormal Affairs Canada on Facebook at facebook.com/ParanormalAffairsCanada or online at drivethrurpg.com/product/353681/Paranormal-Affairs-Canada.