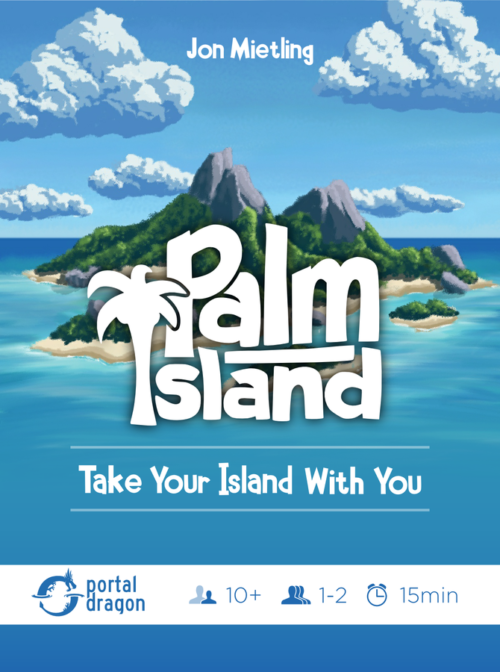 Palm Island is a neat little game. In fact, I’d probably rank it as one of the top two solo games I’ve had the pleasure to play. I first tripped over it while it was still on Kickstarter, and it had already blown its way through most of the planned stretch goals by the time I had a chance to write my CrowdFUNding Spotlights. I opened that Spotlight piece with the following lines:

Have you ever been stuck in a long line with nothing to do? Are you sick of killing your phone battery on mobile games and the book of faces? It’s convention season, so for me and many of my friends the answer to those is very much yes. If you also said yes, Palm Island is designed exactly for you.

The game is designed to be played Solo, but can also be played in either a cooperative or competitive mode with other players. There is no table required, everything is held and played in the palm of your hand. WAIT… Palm Island, palm of your hand, I see what they did there. Very nice Portal Dragon.

So as soon as I was able to make it over to Portal Dragon’s booth at Gen Con, I did. It was the first game I played, often as I was waiting around for dinner on my own somewhere, and one of only three I played outside convention hours. I’m actually not very good at it, I usually land somewhere near the low end of “needs work” but I still enjoy playing it. That says a lot, that I can suck coconuts, and still want to play more.

Before I got too far, I should say that you can play Palm Island alone, or with a friend cooperatively or competitively. I have been having so much fun playing alone, and haven’t really had a situation where I only had one other person around to play a game with, so I’m reviewing this based on solo play alone.

It’s great. It’s sold out. If you can get your hands on it, do so. End of review. (But keep reading.)

Alright, with the review part done, I have a bit of space to talk about how you play. You have a small deck of only 17 cards, and over the course of eight passes through these cards, you will store and spend resources to upgrade your other cards to get more resources and more points. You can hold the topmost card off to the side and play the card under it if you want, but only until you reach the end of the round or when you want to hold onto something else. When you get a resource card you can turn it 90 degrees to store the resources it provides, and then reset it to its original orientation to spend that resource. You can only store 4 resource cards at a time, and much spend or reset another resource card if you want to store a different one.

As you get better you can add in Villagers and earn Feat cards that have new and exciting effects on your game.

The game isn’t hard to learn but is definitely challenging to master. I’m going to keep playing and someday maybe improve to a respectable level. That being said, I wouldn’t mind seeing an FAQ page happen somewhere, just to clarify a few details here and there. I got the fully waterproof edition, that has plastic cards and comes in a cool watertight clamshell box that’s perfect for camping or a day on the beach. The plastic cards are a bit slippy if you are trying to do something with the full contents of the box, but just fine when you are playing.

At the end of things, I standby initial review: It’s great. It’s sold out. If you can get your hands on it, do so. End of review.

You can find all of Portal Dragon’s stuff online at portaldragon.com or on Facebook at facebook.com/theportaldragon