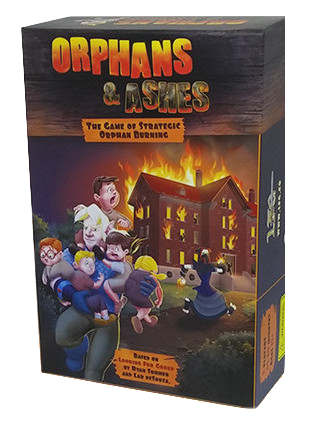 Orphans & Ashes is a tile-based game, for 2-players, from Blind Ferret Entertainment. It is based in the world of Looking For Group, the great webcomic by Ryan Sohmer and Lar deSouza.

Before I go into the game itself, I need to briefly talk about the comic. I suppose I don’t have to, but it helps to get the full context of the game. Looking For Group is a comic based in a fantasy world. At the heart of its cast of characters are Cale’anon, a good-hearted elven hunter, and Richard, an evil undead warlock. The two characters act as literary foils for each other and have a relationship that is probably most easily compared to Thor and Loki.

In Orphans & Ashes, the two adventurers have come across an orphanage engulfed in flames. Cale, being an unfailingly good person, rushes into the building intent on saving every young soul he can. On Cale’s turn he is can move into rooms, and attempt to save orphan’s from being consumed by the fire. When opening a new door, the player rolls a die to see if it will be a new room tile or an exit. If it’s a room, the player draws a new tile, and places the appropriate orphan and fire figures on it. In order to score points for saving an orphan, Cale needs to carry it out an exit. When I say carry, I don’t mean the player puts an orphan figure to the side and scores when they leave. I mean physically CARRY. Orphan figures must be attached or balanced on Cale’s figure until he finds an exit. It doesn’t matter how they are carried, or how many are carried, but if an orphan falls off they immediately die horribly, engulfed in flames, and the Fire scores them instead.

You read that correctly as well, the Fire scores points when it roasts an orphan, and could even win at the end. After each player’s turn, it becomes the Fire’s turn. A die is rolled and the fire spreads, usually in an attempt to consume an orphan. As the rulebook says: “Fire is reckless and obsessive, reaching and spreading like someone with long arms leaning forward for the salt and then knocking the salt over.” Having a game act as a scoring non-player isn’t a unique concept, but it is fairly rare in non-cooperative games. Although I guess you call this a cooperative game of sorts. Cale is trying to save the orphans from being killed by the Fire, while Richard is also trying to deprive the Fire of its victims.

That brings us to Richard. The evil, undead, warlock, Richard. Chief Warlock of the Brothers of Darkness, Richard. Lord of the Thirteen Hells, Richard. Really not a nice person, Richard. Richard’s goal is not all that dissimilar to that of his compatriot Cale. He also is trying to prevent the Fire from consuming innocent orphans. His methods differ slightly, however. Instead of carrying piles of orphans to safety he uses his own power of fire to consume them and take their innocent power for himself (and also score points). Richard has some issues.

The two very different goals and styles of play needed for them make this fascinating game. For example, in order to Fwoosh orphans into ex-orphans, Richard cannot be within the line-of-site of the other player. So there is a potential strategy in just following Richard around and scooping up the orphans that he can’t kill with you around. But that would be a dick move. Actually, it would have to be a Cale move, since Dick is technically Richard, but you really don’t want to refer to Richard as Dick because that rarely ends well for anyone.

Anyhow, Looking For Group is a hilarious comic and that humour carries into their game as well. The rulebook is clear, concise, and still manages to be incredibly fun to read. I could go on for a couple more paragraphs about the jokes and easter eggs, but I don’t really want to spoil them for you. The components are all well thought out and well made, and originally I felt the box was a bit large for what was in it, but since the release of the More Phun expansion, the extra space is a great thing.

Speaking of More Phun, check back here in The Rat Hole on Thursday, and you can read our thoughts specifically on that expansion.

Until then, you can find all the things from Blind Ferret Entertainment online at shop.blindferret.com and on their Facebook page facebook.com/BlindFerretENT.

I also want to toss out a link to LFG artist Lar deSouza’s Spoonflower page ( www.spoonflower.com/profiles/lartist ) because everyone needs a shirt made from his tiki prints.

BONUS: Here’s a song that really sums up Cale and Richard, so enjoy This Is War: