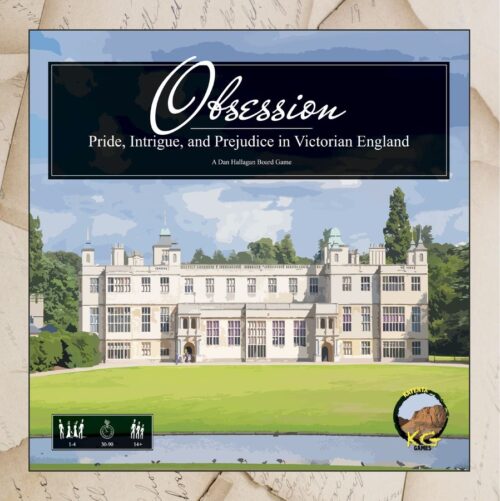 You are an obsession, You’re my obsession

I originally heard about Obsession (the board game, not the Animotion song) back in 2018, when the 1st edition was on Kickstarter. The Victorian theme didn’t really appeal to me so I didn’t give it a 2nd look.

Fast forward to 2019 & the game appears on Heavy Cardboard. I take another look at it. Deck Building, check. Worker Placement, check. Tile Placement, check. Many of the mechanics I really enjoy. How can I get this? It seemed almost impossible.

Jump ahead to the announcement of the Kickstarter for the 2nd edition as well as a couple expansion. I’M ALL IN. I’m not positive I’ll love it that much but I’m afraid if I do, I’ll have a hard time tracking down the expansions on the 2nd hand market.

Then I wait, along with everyone else, for the fulfillment of our Kickstarter pledge & eventually, it arrives. I rip into it & plead with my friends & family to play with me, which they finally did. Now I’ve only played the base game (along with Wessex, which is basically just a new family) since the designer himself recommended waiting on the big expansion, Upstairs Downstairs, until you’ve got a few plays under your belt. Okay, I’ll hold off on that (although I took the shrink off, I didn’t dig into the box for fear of wanting to just put it all together).

Get on with it man. How does it play?

Over the last couple weeks, I have played it solo, 2-player (2x) & 3-player. Great at all counts, although I prefer playing with others (in general). Also, I’ve only played the Standard game. There is an extended game which would probably add another 30 minutes to the total length. The game is already plenty long (although it doesn’t feel long).

The part about being a deck builder is a bit of a stretch in my mind. Similar to games like Concordia, there are ways to add cards to your hand (not your discard pile) & also like Concordia, you start with your entire deck & in order to play cards again, you “pass”, which allows you to reclaim your cards (among other things). I’m getting ahead of myself. Let’s start with the turn structure & your starting board/cards.

Each “family” has a special starting ability/asset which makes each player somewhat asymmetrical. Each player starts with 4 family members (cards) along with 2 random “casual guests” as well as the same tiles on their estate (1 of each of the 5 colours/section).

Each turn, players will choose a building tile as their “hosted event”. However, you must make sure you have the proper staff (meeples) as well as the required gentry (cards) to service the event. These tiles & cards will provide “favours” in the way of new guests (cards), reputation (which allows you to play better tiles & prestigious guests), money & new staff. Once favours are collected, you can purchase new tiles from the Builders Market to add to your estate, creating a unique set of actions to use on a future turn.

Pardon the pun but I’m obsessed with this game. When I’m not playing it, I’m thinking about it. I don’t usually fixate on a particular game like this (I’m all about playing a game a few times & moving on to the next hot item). As I mentioned earlier, it’s not really a deck builder but more of a worker placement/action selection type of game (with a bit of deck construction thrown into the mix). It’s not a complicated game but it is strategic and although there’s very little in the way of variety in the setup, with the huge amount of tiles in the game, along with the large stack of casual & prestigious guests to acquire, each game plays out differently. Plus there are VP cards that can be used for end game scoring or for a boost of something during play. On top of that, there is the vying for the courtship of the Fairchild siblings, to help enrich your hand & potentially, your score.

I would easily give this game a 9 out of 10 with it potentially reaching a 9.5 with the addition of the extended staff & gameplay of the Upstairs Downstairs expansion. Highly recommended.

You can find Kayenta Publishing online at www.kayentapublishing.com or on Facebook at facebook.com/kayentagames.

Tony Lawhorne discovered the hobby in 2014 & quickly became addicted to it. He play all sorts of board games, from party games to brain-burners but his heart belongs to the mid-to-heavy Euro game. He plays as often as possible & loves trying new games, much to the chagrin of his family & friends. As far as his real life, he’s married with 3 adult children & run a marketing company, Lawhorne Design LLC.