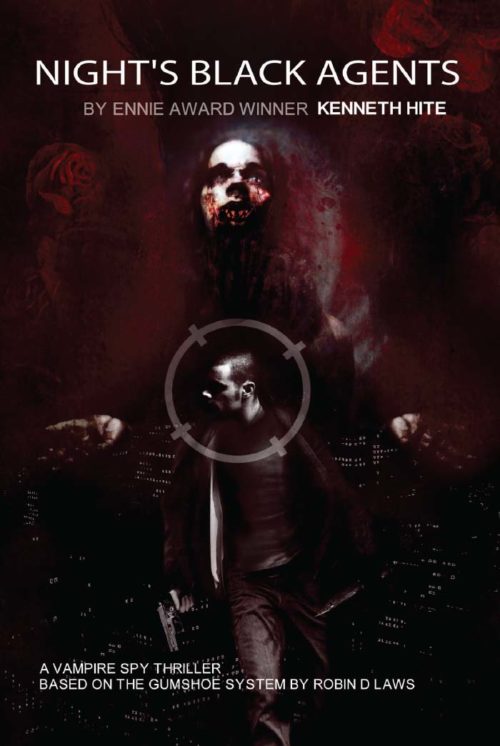 So, last February I had the foolish notion to review only two player games for the entire month of February. Oddly, it worked out, and I actually had more games than I had timeslots to review them. One of the most interesting games I reviewed for that series was Cthulhu Confidential. Based on the Trail of Cthulhu game, it took all the investigative goodness of Pelgrane Press’ GUMSHOE System and distilled it down to an experience for two people: a single player and a GM. I loved this new GUMSHOE One-2-One system, but I didn’t really know the original GUMSHOE System all that well.

The main premise behind GUMSHOE is that failing isn’t fun. Not in a “killed in battle” sense, but in a “failing to find the necessary thing you need to advance the narrative” sense. In GUMSHOE if you look in the right place, and use the right ability, you’ll find the clue you need. “But what if I don’t have the right ability?” you may ask. Great question, the answer is that if you don’t have it, someone else on your team should. The whole character creation process is designed to facilitate this.

In some games, you can build your meat shield in a corner somewhere, and step into just about any group. The GUMSHOE model is about building a cohesive team, with every Investigative Ability covered by someone in the group. That doesn’t mean a character built outside that specific team couldn’t join in for a game, or that someone missing a game night will break the game, it just makes it so everyone gets the opportunity to be involved in the investigative part of the game.

Working together to build a team doesn’t mean you won’t get to customize and individualize your character. Investigative Abilities are designed to move the story forward, but when push comes to shove you need a way to push and shove. These are your General Abilities, what characters will use when there is a chance something could fail.

There are a lot of options to choose from, so a player can opt to select a package of abilities to help streamline the process and help define their past life. These Backgrounds, as a concept, are simply part of the GUMSHOE System. But the specifics of each Background, and many of the Abilities are built for Night’s Black Agents.

So what exactly IS Night’s Black Agents? NBA is a Vampire Spy Thriller. Let’s break that down a bit, shall we?

Vampire- The vampires in NBA come in any number of forms. Mechanically they classify them as either Supernatural, Damned, Alien, or Mutant, but this mostly for simplicity. The Director (the person running the game) can create whatever sort of Vampire they want. They’ve even included a handful of sample vampires, as well as numerous vampire-adjacent monstrosities. It’s the Directors job to create the world they want, but also their responsibility to make sure they are on the same page, or at least the same book, as their players. (If I sit down and your vampires suddenly sparkle, there’s going to be 50 shades of going down.)

Spy- The spy theme is more obvious, but no less varied than vampiric options. James Bond is an obvious example, but there’s a good-sized list of spy agencies. Oft fictionalized agencies like Bond’s MI6 are there, but so are numerous other, less well known, agencies that Players and Directors can draw on. (Not included is CSIS. Canada’s intelligence agency is too good at being a secret I guess.)

Thriller- Action, adventure, and yes you can include zombies in NBA, and they can dance if you really need them to. More to the point is that this is a Spy Thriller. Jason Bourne is a prime example of the Spy Thriller genre, that is often referenced. The section on Sources at the end of the rulebook also points out television shows like Alias and Burn Notice (which is a great show)

Roll all of that together and you’ve got… Assassin’s Code by Johnathan Maberry. Of course, you also have Night’s Black Agents or we wouldn’t be here right now. One of the comments made by Kenneth Hite in NBA, is that for some reason this seemly obvious smashup of genres hadn’t really been done before. So naturally, book 4 in the Joe Ledger series did exactly that plus or minus a few months of NBA. By now, I’m sure someone will have pointed this out to Mr. Hite. It’s just interesting, since the entire Joe Ledger series is a perfect fit with NBA, and Assassin’s Code specifically involves a twisted take on vampires. Is it too much to ask for a Night’s Black Agents: Echo Team sourcebook?

One of Night’s Black Agents biggest advantages is also something I consider to be its greatest weakness. The entire game, and the world it creates, is incredibly free form. Aside from the previously mentioned “vampires can be anything” there are actually 4 Modes that the game can be played in, each with slightly different rules. Some Directors are going to thrive being given such freedom. Others may find the result too unfocused for their tastes. On the player side, that same variety can be very exciting, but it can also lead to wildly different play experiences between groups that may or may not be desired. (Obviously every group in any game system will have differences, that’s part of the fun of gaming. But it’s less common to have the core rules and mechanics shift as drastically as they do here.)

One thing I do like about the openness of it is that it specifically allows, at the Director’s discretion, to use content from other GUMSHOE games. It mentions four other games, I suspect mainly because that is how many had been released at the time. But, it specifically notes the interoperability with Trail of Cthulhu, and the summery of the recently released The Fall of Delta Green also mentions working with both games (as well as Esoterrorists).

I’m certainly curious to dig into more GUMSHOE games down the road, and very excited for NBA: Solo Ops. If vampires and spies aren’t your thing, there are nearly a dozen GUMSHOE titles available on Pelgrane Press’ website below, with all sorts of interesting themes you may like better.