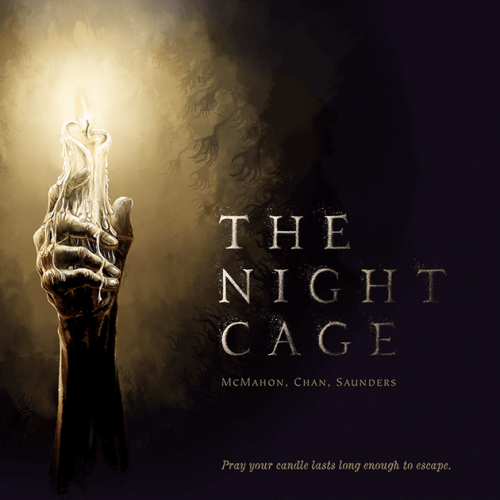 October is over and so is “Spooky Season” but that doesn’t mean we can’t continue to enjoy games that are a bit spooky. The Night Cage fits that bill perfectly. Imagine a pitch dark labyrinth, where you can see farther than the light of a single candlestick. Imagine that whenever a corridor falls back into darkness, whatever was there is literally swallowed by that Darkness, disappearing forever to be replaced by something new if you tried to go back. That’s The Night Cage.

The game is playable by 1-5 players, but will never have less than four Prisoners in a game. In a 3-player game the fourth Prisoner cycles through the other players, the other player counts work as you would expect. The game is won if all the prisoners can find and pick up a Key, then find and converge on a Gate tile. The game is lost if the Prisoners cannot each collect a Key or they cannot all bring all of their Keys to a Gate, including if all four Gate tiles are lost to the darkness.

On each Prisoner’s turn, they can choose to Stay or Move one space. If they started the turn on a “crumbling tile” it becomes a pit after they have made either choice and if a prisoner is ever on a Pit tile they fall into the Darkness before landing back into the labyrinth on a newly drawn tile. If that Prisoner moved, fell, or landed (after falling), on a Monster, that monster attacks any and every Prisoner within their line of sight. There are more Monsters, including extra terrifying Boss Monsters, when you play using the advanced rules. But for the basic game, you’ll only face off against the nightmarish Wax Eaters who remove three unused tiles from the Draw Stack and puts out that Prisoner’s candle. (More on that shortly.)

If the Prisoner was on a regular (not crumbling) tile and they stay, one tile is burned from the Draw Stack and they gain one Nerve token that can be spent for a number of temporary advantages that I won’t go into here. If they move on to a new tile, any tiles no longer adjacent to a Prisoner’s candle immediately disappear into Darkness and are discarded, new tiles are then drawn and placed adjacent to any open paths on the tile the Prisoner is now on.

Without a lit candle, a Prisoner is referred to as being Lights Out and only reveals a single tile: the one they are moving onto when they move onto it. Yes, that means they could unavoidably stumble right smack into a Monster. They must continue to wander blindly, too scared to Stay put, until another Prisoner is able to move next to them and relight their candle.

As the Prisoners move through the map and more tiles disappear into the Darkness or gaping maw of a Wax Eater, the Prisoners’ candles slowly burn down, as they draw ever closer to their own demise. This is beautifully represented by a clip-together tile holder printed with the image of a burning down candle. As the pile of tiles diminishes, it becomes ever more obvious to the players that their time grows shorter. But the game isn’t a total jerk about this. There comes a point in the game where it becomes physically unwinnable, with all of the gates or remaining keys lost. When tiles are lost they are placed on a separate board making it open information what is gone (and by extension what is left) so that when all the gates/keys are lost the game can end. This also acts to increase tension as player not only when the game ends, but also how close they are getting to losing as every tile is revealed from the draw stack.

The Night Cage is possibly the most terrifyingly effective use of a “fog of war” mechanic of any tabletop game I’ve ever encountered. I had the pleasure of getting to test out a version if the game prior to the pandemic and enjoyed it immensely. Time and development served to make the game even better. On top of the more advanced Monsters included in the game, I received an additional promotional monster. I’m a huge fan of games that can integrate smaller expansion materials like that. It allows a game to extend its life, freeing it from the Darkness that all games fear, the dusty closet of unplayed games. Not that a game a great as The Night Cage is likely to find itself there anytime soon.