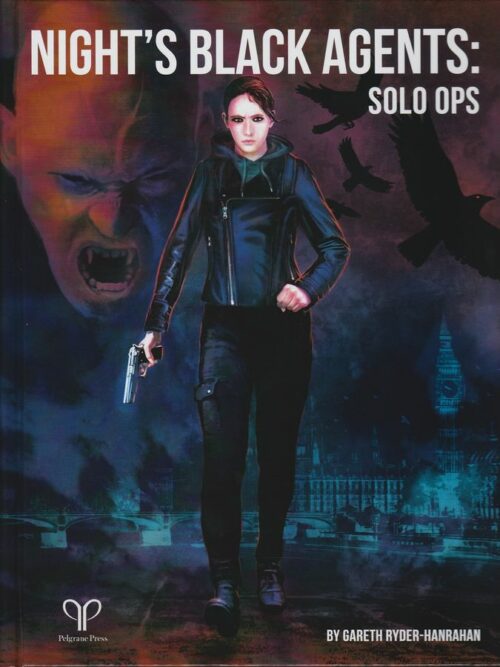 More years ago than I care to think about, Pelgrane Press released The Murderer of Thomas Fell, a one-shot adventure for their Trail of Cthulhu game, as part of that year’s Free RPG Day. It wasn’t like anything I had played before, and I loved it. So, when the opportunity to review Cthulhu Confidential arose, I jumped at it. It took the GUMSHOE system that drives Trail of Cthulhu and remoulded it into a more intimate game for a single player and a GM, the GUMSHOE One-2-One system.

As much as I enjoyed Trail of Cthulhu, small-town life conspired against my getting to play it again. So again, when the opportunity to dig into another GUMSHOE game, Night’s Black Agents, came up I jumped at that as well. Being able to compare the two adjacent systems like that made for a unique academic experience, on top of just being enjoyable games.

That brings us to now. Night’s Black Agents: Solo Ops, a game that I can only describe as something greater than the sum of its parts. I can’t say if it was an intentional choice, but there is a distinct feeling of less-is-more.

The original NBA’s greatest strength in the hands of a good GM (or Director in this game) was also its greatest detractor for me. It tried to be everything for everyone. There were several modes of play, depending on the adventure, that’s gone in Solo Ops. Similarly, Vampires can be anything, from traditional bloodsuckers, to medical mutants, to aliens. Technically all of those options are available in Solo Ops, but they are a few paragraphs in a two-page section rather than a chapter unto themselves.

On the other side of Solo Ops’ creative DNA is Cthulhu Confidential. To be clear, Cthulhu Confidential did exactly what it intended to do, and did it exceptionally well. In an effort to show off the diversity of stories that can be told it presented three very different prebuilt protagonists, in different cities and times, each with their own adventure written and balanced to that specific character (that’s important, and I’ll come back to it). Solo Ops eschews this in favour of a single protagonist with three adventure scenarios. Cthulhu Confidential’s approach makes for an exciting read, and gives more options to explore, but Solo Ops tells a very different style of story so I appreciate the cohesion that a single character brings.

You might be asking yourself why all the focus on pre-generated characters? Aren’t you simply going to build your own anyway? The answer is, you can. However, the nature of a solo adventure is VERY different than that of a group adventure. Think about every cooperative game you’ve ever played, not just RPGs, anything. There are inevitable points in the game where you will say I can’t do X, can you? That’s not an option here. You can’t ask the friend next to you for help, because there isn’t someone there.

One of the most important tenents of both GUMSHOE and GUMSHOE One-2-One is that as long as a player who has the right skill(s) and looks in the right place, they WILL succeed in finding the clues they need to advance the story. By using a pre-generated character, or at least a pre-generated framework for a character, the Director can run a balanced game that challenges their player without creating a scenario where they are unable to proceed. Another aspect to that is the concept of Contacts, non-player characters that can contribute something a player may not have access to on their own. They are the equivalent to a (sometimes literal) phone-a-friend.

Our pre-gen hero here is Leyla Khan, an ex-MI6 officer and an ex-thrall of a vampire. She has very few memories of her past, and therefore no contacts to draw on. As her stories progress she’ll need to gain the trust of the people she meets, and hopefully make them a Contact she can call on for help later. Since previous characters already had built-in Contacts, this adds an interesting new layer to One-2-One, and I’m curious to see which model gets used in the future. I suspect it will land somewhere in the middle, as the stories need.

The last improvement I want to mention is in iconography. Using icons to quickly classify game elements is legitimate, prudent, and important. If there was one thing I actively hated in Night’s Black Agents, it was the icons they used. There are already fewer icons needed in One-2-One, and Solo Ops simplified and improved them greatly over Cthulhu Confidential. Instead of trying to remember what a tiny picture in a box means, it’s an easy to read letter that prompts your memory of it’s meaning rather than taxes it. It may seem like a tiny detail, but it improved the clarity immensely.

If you’ve played Night’s Black Agents (and you should) Solo Ops gives you a new but familiar experience. If you’ve played Cthulhu Confidential (and again, you should) Solo Ops will probably feel a bit tighter and cleaner of a game, and I really believe it is. The best place to end this review is to bring it full circle with one of my first thoughts:

Night’s Black Agents: Solo Ops really is a game that is more than the sum of its parts.