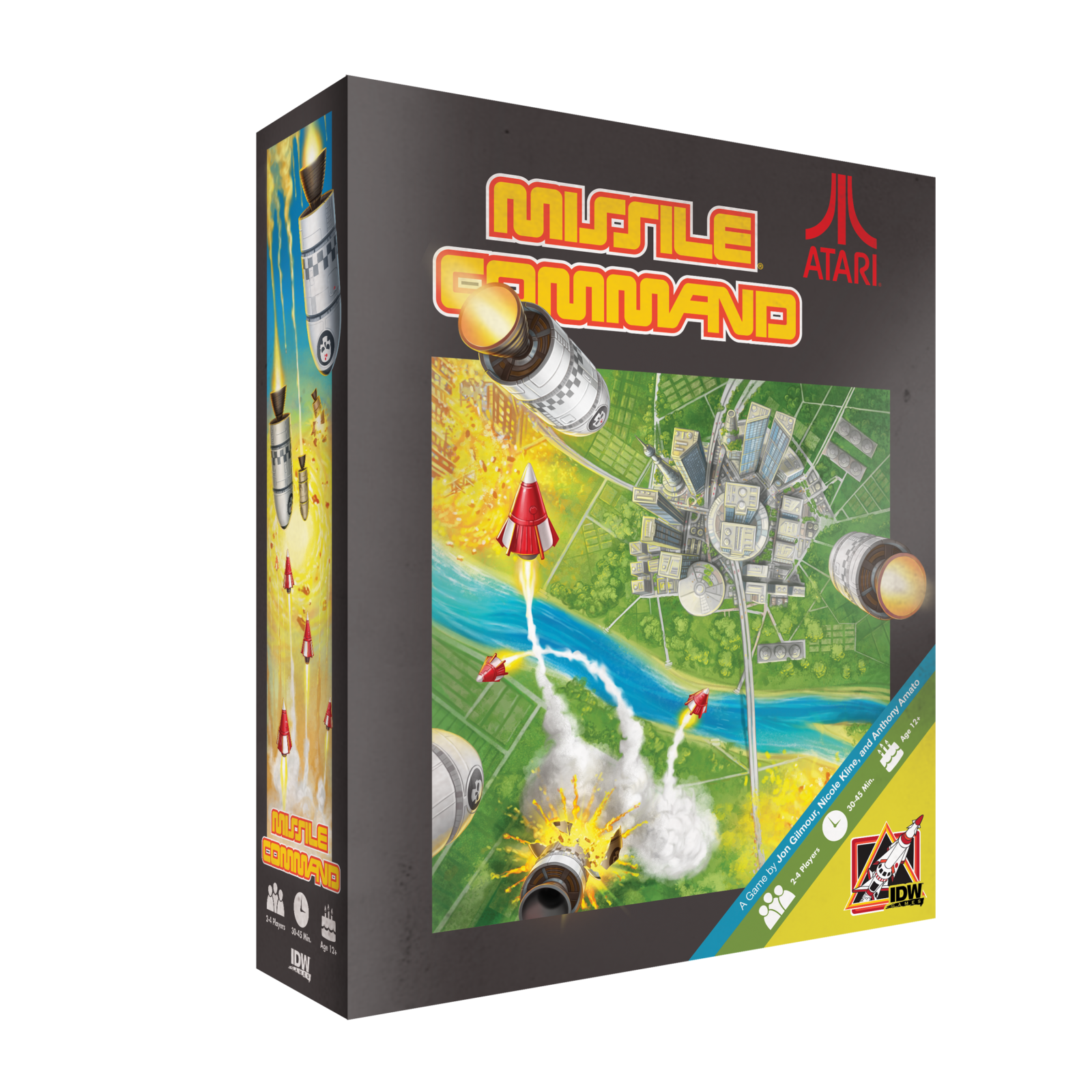 The late 1970s and early 80s was an era of change. The previous generation of electro-mechanical games were all but dead, replaced by video arcade games. Home consols didn’t exist yet, so plugging quarters at the video arcade was the only way to play. In was into this world that Atari released Missle Command.

In the original Missle Command arcade game, the play had six cities to defend against incoming missiles. They would use a trackball to target the incoming missiles and launch their own from one of three silos, each with its own launch button. There is no real way to win the game, it just keeps getting faster and harder. You can earn more cities (which act as your lives) but inevitably you die.

38 years later the game has been ported to numerous systems, everything from Gameboy to phone apps, and now it’s finally reached the peak of technological evolution. A tabletop game.

In IDW’s tabletop version the players take on both the offensive and defensive roles of the original game. Players start by purchasing or trade with each other for resources such as offensive Missiles, defensive Interceptors, and Nukes. All of this is done openly and transparently, with resources being shown to all the players.

In the second phase, those resources are moved behind a screen, where they remain until used, or a special ability reveals them. No one HAS to use their resources, so if you forget what they saved from previous turns, you may be in for a nasty surprise later in the game. The planning phase is also the time when a player decides who they want to attack. To do that they take one of the Missles they purchased, and places it in one of the six spaces on their hidden planning board. The colour of the Missle corresponds with the colour of the player you are attacking, and the space that it is placed on the planning board corresponds with the city being targeted.

Phase three: FIRE MISSLES!!! Technically, everyone’s missiles launch at the same time, but however your group wants to resolve them is fine. There are a few things that happen as the rocket glare red in the sky. First, you want to check for collisions between missiles. If Red has targeted Blue’s city 04, and Blue has targeted Red’s city 04, those missiles will collide with each other, creating lovely fireworks, but never arriving at their intended target. If a player purchased Interceptors, they can choose to use them to shoot down an incoming Missle. If neither of these things happens, the remaining Missles impact their targets. That player flips over the City Card for that city to indicate it has been destroyed, and can no longer be a target. For every Missle that connects, the attacking player gets one Scoring Token. If any player has lost all six cities, the game ends without moving on to the last phase. The player with the most points wins, even if all of their cities are destroyed.

In the final phase, players collect GDP (money) and start thinking about what to buy when Phase 1 rolls around again. Every player automatically collects 2 GDP for every city left standing. Where things get interesting are the destroyed cities. During setup, each player gets six face-down city cards. When they are destroyed they get turned face up to reveal a new GDP value and other bonuses. The destroyed city’s GDP value may even be higher than when it was alive, or it may be zero. Bonuses often include gaining resources for free, either once or every turn.

Playing this with a full six players leads to all sorts of fun negotiations and intrigue. It took a few minutes to go through the rulebook. It’s not that it’s a complicated game, but the layout and above average quality of the physical rulebook, makes it FEEL a bit intimidating at first. As a result, we took extra time thinking we maybe overlooked something.

Overall the game was a ton of fun. It has an exception blend of public and hidden strategies, well-designed negotiation rules, and only as much ‘take that’ as you want to throw down.

You can find IDW Games online at idwgames.com or on their Facebook page, facebook.com/idwgames.