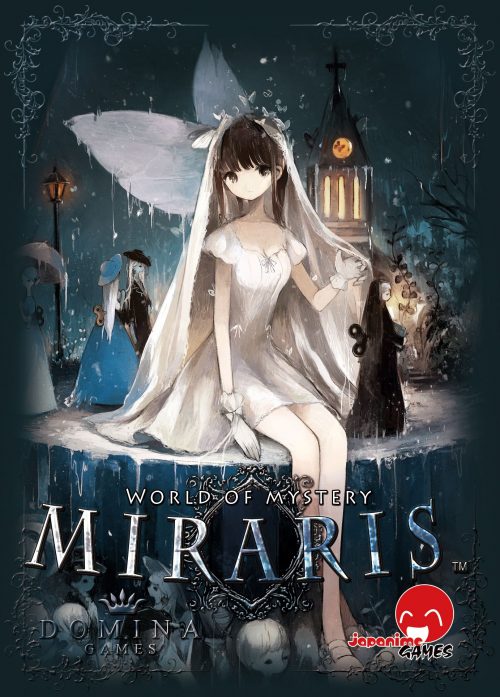 Sometimes you just want something fast and simple to learn, and Miraris fits the bill perfectly. Everyone starts with a matching hand of nine numbered cards, called Dormire. From the deck of Wonder Cards, one card for each player is revealed in a row next to the deck. Every player chooses a Dormire Card from their hand, with everyone revealing their card simultaneously. The Dormire Cards are then placed in ascending order next to the revealed Wonder Cards and the player collects that Wonder. EXCEPT, if there are any duplicate numbers, those players get nothing. Finally, a new row of Wonder Cards is drawn, and if there are any cards left in play a new card is stacked on top of them and the whole stack is bid on in the following round.

The basic scoring is straightforward; the number crowns on a card is how many points it is worth, and the highest points after eight rounds win. However, at the beginning of the game player were dealt two or three (depending on player count) Character Cards, secretly choosing one Character to keep. Every character affects the scoring in some form, which will often frame what sort of strategy a player might take during the game. For example, Lucia takes 2 unclaimed Wonder Cards from the face up row, but if there were no cards unclaimed in the last round, oh well. Fatima, on the other hand, changes the value of all of her Wonder Cards to 7-points each IF she does not have any The Garden of Shadows cards at the end of the game. One might think that should be easy, but it might not be since players aren’t bidding to pick a specific face up card, they are bidding for a place in line, opposite those cards. If you want the second card in the row you are hoping the Dormire Card you play will be the second lowest number, so you might get stuck with The Garden of Shadows, and hope for a way to discard it during scoring.

The game is simultaneously both fast and simple, and uniquely strategic. It also seems inexplicably balanced. We had scores around 20 points and scores in the high 60s. But never did we have one player with ~20 points and another with ~60, every game ended in a very close score. There was never once a runaway victor. It was great.

There are some oddities I noticed, that have absolutely no impact on the quality of this game. The game manual opens with a beautiful bit of prose, and a note that “This game’s story has nothing to do with that of the ALGL book series.” I presume, because it’s never clearly stated, that the quote is from that book series. After a bit of internet searching, I realized that “ALGL” was created by Qtonagi, the artist for all three games in the Domina Anthology.

That brings us deftly to a discussion of the artwork. First and foremost it’s gorgeous. Period. My one complaint is that of the three games in the Domina Anthology, Miraris is the least thematic. It is completely consistent with Pralaya and Argoat, but if there’s a connection to the story, I don’t see it. To be perfectly honest, the story seems completely irrelevant and disconnected from the game at all. Using terms like Miraris (derived from the Latin term “miror” for “remarkable” or “astonishing”, not actually “mirror” as we use it.) and Dormire (also from the Latin for “run” or “sleep”) only reinforces the story if you know what the words mean. So my advice is to read the description on the box and that first page of prose, then don’t think too hard about it. Just enjoy a great game.

You can check out Japanime Games’ Kickstarter for the Domina Anthology 2 until June 23.

You can find the original Japanese publisher, Domina Games, online at dominagames.com or on Facebook at facebook.com/Domina-Games-310795519075768. (Both in Japanese)

English language publisher, Japanime Games, is online at japanimegames.com or on Facebook at facebook.com/JapanimeGames.