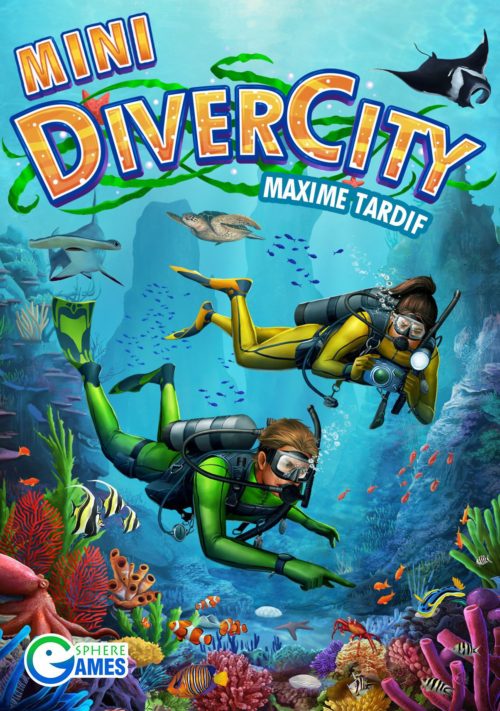 Mini DiverCity is a great, and challenging, cooperative game from Sphere Games. Each players hand is played facing out, so the other players can see, but they are blind. Even though they need to work together, Players are not allowed to discuss strategy in any way. The only exception is by using their only action for the turn to tell one other player what cards are in their hand, and where they are in their hand.

Before I can really get into how the game works, I should start with the overall theme and message of the game. It’s VERY much Environmentalists good Corporations bad. The point of the game is to save a certain number of species from extinction before the actions of various industries drive them to extinction, with the save/loss ratio varying by difficulty level the players choose.

Setting up the game is simple, you create a species scale using the included cards and species tokens. The order the cards go is irrelevant as long as green survival and red extinction zones all line up. You put each of the six coloured hotel cards facedown surrounding the species scale, and you’re ready to go.

The Game starts with The Corporations’ turn, with the active player flipping of the first card of the Corporation Deck, and applying the consequences. Then the Active Player takes their turn but choosing a single action to do. They play a species card from their hand, to move that species one step closer to being saved, and drawing a new card. They can Use their walkie-talkie to tell another player what cards they have in their hand and the order of them. They can close down a hotel, by flipping any one revealed hotel face down again. Players also have a Diver Card with a unique special ability that can be used once per game and does not count as an action.

The game ends in victory if the players save enough species (which varies by the predetermined difficulty level of that game). The game ends in defeat if all six hotels are face up; if the Species Deck runs out of cards, and you can’t take any further actions; or if The Corporations cause too many species to go extinct (again, determined by the chosen difficulty level)

Let me be very clear about that, we have one planet, and we should be working towards reducing the impact we have on it as much as possible. The messaging in the game is important, but it is also really heavy handed. So heavy-handed, in fact, that I was a bit turned off at first. But once you get past that, it’s a solid game. The blind hand mechanic is something I’m glad isn’t used often, but when it works it works, and it works well here.

Everyone had fun playing, and the 9-year old I played with wants to play more often. They played with a wonderful youthful enthusiasm that only a pre-tween has. She wanted to save ALL the species, not just the few we needed to win. You can play with up to seven players, or just play solo, and you’ll get a somewhat different play experience depending on how many players you have. But you’re sure to have fun, no matter what.

One of the neat touches to the rules sheet is they fit everything on a single page, with only some explanations on the back. They even had space to fit in some brief information about the different species that are in the game. Educational, and fun.