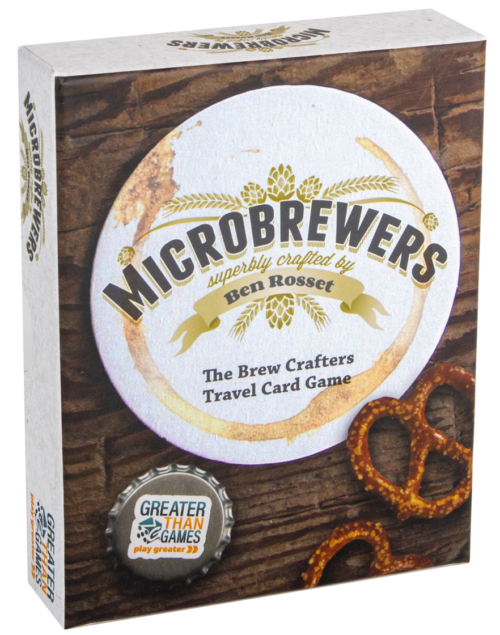 If there’s one thing I enjoy as much as games, it’s a good beer. None of that Bud Light crap, actual good beer. I tend to go for darker beers. A nice creamy stout. Maybe a red or brown ale if that’s all there is. When I’m on the road (which can be a lot) I usually aim to try something as local as I can. The only notable exception to that was a beer garden in Lucerne, Switzerland. They had Canadian on their sizable menu, and I ordered one for the irony. They were sold out so I got something delicious from a monastery down the road.

Greater Than Games has three beer crafting titles. Homebrewers, Brew Crafters, and Microbrewers. Microbrewers is billed as “a compact companion to our other beer crafting games.” I think calling it a “companion” is doing it a disservice though. It is a fun little game in its own right. The box is the size of two side-by-side decks of cards, and the rules fit on a single page, with the most of the backside of the page used for advice, clarifications, and a couple of extra 4-player rules.

Game play is REALLY easy to learn. Draw two cards (either from the facedown deck or from five faceup options). Take one action: Play one card (it remains played for the rest of the game for any scoring or effects), Discard as many cards as needed to brew a batch of beer (keeping those cards separate from the main discard pile and scoring for the type of beer brewed), or Draw one more card. By the end of your turn, you can only have a maximum of seven cards in your hand.

When a player reaches 21 reputation points, players finish the current round, and play one more final round, before adding up the final scores.

Most of the scoring comes during gameplay when a batch of beer is brewed. With the points varying by type of beer, and any bonuses given by cards in play. But some cards give a bonus based on the end of game totals. For example; Employee Manager card gives you one point for every Employee card you have in play, Brewery Tour does the same for Equipment cards, and Tasting Room [which I totally just wrote as “tasty room” btw] gives one point for each unique ingredient card that you discarded to brew different beers during the game.

There are only five possible ingredients (Malt, Hops, Yeast, Fruit, and Coffee), and only six employee or equipment cards. So while those points can add up to be the winning factor, it isn’t enough to win alone even if it were plausible to max out all three bonuses.

My only criticism of the game is the mini-poker chips used to track scoring. They are opaque and slightly too big. I ended up replacing them with some smaller transparent bingo tokens I have. The original chips are functional, but they just felt wrong by comparison.

Other than that, this game is a ton of fun. Even more so now that I can hit up an actual microbrewery and play whilst enjoying a thematically tasty beverage.

you can find out more about Greater Than Games online at greaterthangames.com or on Facebook at facebook.com/GreaterThanGames.