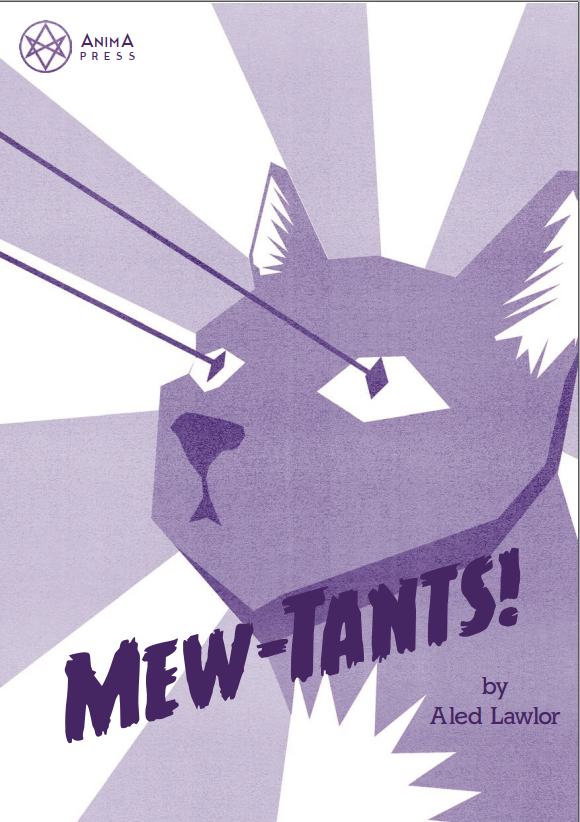 [This review will use “adult language” there’s not really a worthwhile way around it, so be advised.]

Mew-tants is the first of a planned series of rules-light RPGs printed and distributed in a ‘zine format. If you’re not familiar with ‘zines, the term comes from independently created and printed fanzines and magazines. They are often made with a simple photocopier, but in today’s era of print-on-demand services, that’s not always the case anymore.

In Mew-tants, the players all play perfectly normal cats. But with superpowers. You’ll adventure around your neighbourhood, taking down ‘nip dealers and other unsavoury types. Anything is possible when you are a Mew-tant. Except things requiring thumbs, because you’re a cat.

Character creation is super fast. Roll a d12 to determine the breed of cat you are, roll it again to determine your superpower. Your breed determines your base stats, then you add +2 to something you are good at and -1 to something you’re bad at. After that’s done it’s just personal stuff. Player cats all start with nine Lives, representing their remaining health. One hit equals one life lost. The sharpness of your Claws is what you use to fight, or anything else physical. The twitchiness of your Whiskers is your awareness and mental abilities. Finally, your ability to interact with others is determined by how many Fucks you have to give.

Yes, you read that right and I hope it makes you smile as much as it did me.

Every test that requires rolling uses one d6 for each number of the appropriate stat, a single 6 is all that’s needed for a success. If you roll more 1s than 6s, something goes wrong (even if you otherwise succeeded), and players can always spend one of their Lives to re-roll any dice.

Despite the fact that health is tracking in Lives, when a character (players and NPCs alike) runs out of Lives they don’t actually die. What it means, and I’m quoting the rulebook here, is that “you’re done with this shit and are going home before you really do get in trouble.”

The framework of basic adventure creation isn’t much harder than character creation, roll a d12 for your goal and again for the main antagonist, there is a list of basic enemies to use, and nothing preventing you from designing any of this on your own.

The last half of the ‘zine is a complete adventure, The Catnapping.

Conceptually, I love everything in this game. So much so that even the few concerns I have are easily overlooked. I’m not a fan of how the first few locations (2, 3, 4) are mapped out in The Catnapping adventure, but a good GM can just reverse the order of those scenes without much trouble. There are a few points throughout that reminded me that Anima Press is a British company, such as the use of the singular “dice” as opposed to “die”. My family is British and Canadian English uses a lot of British spellings, but that one messed me up. It’s in no way a bad thing, but it’s worth noting if you’re North American that it’s not an error. All told, this was amazingly fun! I love that it’s a ‘zine, but I want more and I want it soon.

Mew-tants will eventually be followed up by Were-woofs, and I hope there will be even more to come after that.