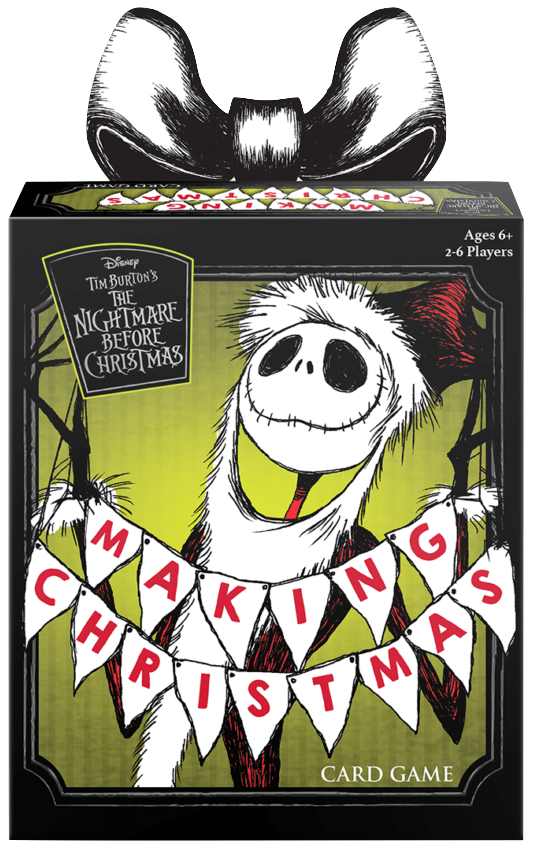 I want to start by pointing out that this game is designed for ages 6 and up, and I played with another adult. We both love the movie and agree that it belongs as both a Halloween and Christmas movie. Mostly out of coincidence, we have also played a surprising number of family and kid weight games together. We have found that as long as a player has more agency than a Candyland-style roll/spin/flip and move game, like-minded adults can get surprisingly deep into a kids game. Making Christmas was no different.

The game is simple, assemble the four puzzle-piece Workbench board (which is more likely to lay flat than a folding board) and randomly fill the nine card grid with toy parts. Draw three Goal cards and place them in the marked space next to the board, and each player draws two Toy Part cards for their hand. Setup complete. On your turn, you can either swap two Toy Parts on the Workbench or remove one and replace it. If you can’t complete a toy, you may also discard one or both of the Toy Parts in your hand. Refill the board and the next player goes.

So simple a 6-year old could do it. Wait… that’s the point. Sorry.

Being adults, we immediately misread the rules to make it harder. Somehow we thought that when you completed a goal you also discarded a third card from the Workbench. While incorrect, it added a fun level of strategy. That’s the one thing this game needs, an extra page of “optional rules” for more experienced players. We didn’t implement any of these ideas, but:
Oogie Boogie rule: if there are three matching Goal cards, you may replace all three, removing them from the game or shuffling them back into the Goal deck. Similarly, if you have three matching toy cards in a row (like Oogie’s slot machine, get it?) you can replace all nine cards on the Workbench.
Santa Claws rule: once the Goal deck is empty, every player gets one more turn as normal. On their second turn, they may play as normal or remove one of the Goal Cards (preventing an opponent from scoring it)

The point of rules like that is to prevent the game from stalling, specifically at lower player counts. We hit several points where we were basically just cycling through Toy Parts until one of us could do something. I rarely proffer “improvements” to games, but this is a great game and a few house rules could give it a bit longer lifespan and replayability.

We played this as a “filler game” waiting for some other players to come for a night of holiday roleplaying (come back tomorrow for more on that) and it was perfect. Aside from those couple of stalls, it moved quickly and was full of terrifying Christmas merriment. If you have kids that love the movie, they are sure to love this game.

You can find Funko Games, online at funkogames.com or on Facebook at facebook.com/funkogames.

One of the traditions we have here in The Rat Hole, is that to end each of our Christmas game reviews we add a bit of holiday cheer in the form of a song. Well, A Nightmare Before Christmas makes it easy to do exactly that. So here are the amazing Pentatonix… Making Christmas!