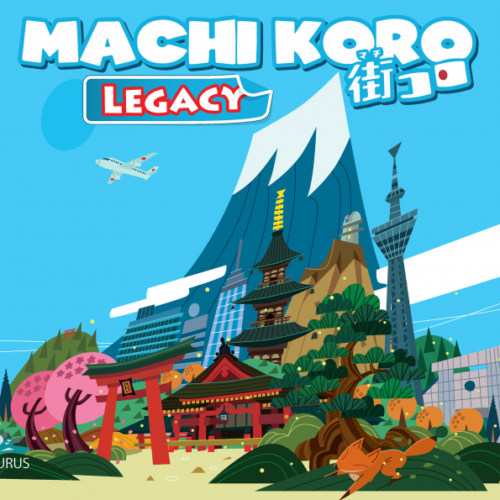 The best place to start here is WHAT IS A LEGACY GAME. The concept is less than 10 years old and only really started to come to prominence around 2015, with the release Pandemic Legacy. According to Legacy designer, Rob Daviau, the idea came about playing clue. You play a second, or third, or fourth, game of Clue, but why would you keep inviting a room full of possible murderer suspects back for dinner? Each game resets and repeats. But what if it didn’t? What if the characters remembered the last game and the game before that? In a Legacy game, things that happen in one game can carry on into future games. This can mean new rules or components added to the game, components removed from the game, and even permanent changes made to things.

The next thing I need to put on the table is that any comparisons I may make between Machi Koro Legacy and the original Machi Koro are purely through exposure and a bit of google-fu. Why do I say that? Because inexplicably, (and this may shock you to read this as much as it shocks me to write it) I have somehow never played Machi Koro. Every opportunity has been foiled by circumstance, but that gives me an interesting experience with Machi Koro Legacy.

In the original game, players are the mayor of the city of Machi Koro, using dice and cards to build the best city they can. To show my age here, think Sim City with cards. This Legacy version is a similar premise. Each player is the mayor of a town on the island of Machi Koro. It’s a chill job until one of the other mayors decides to start building new things to bring in tourists, and now no one wants to be left behind. But it’s still a small island, so all the towns have agreed to work on a shared community landmark together.

That’s the easy part of this discussion. The difficulty in reviewing a Legacy game is that it’s a campaign, a serialized story. Each game builds on the previous game, with some elements being removed and other elements being added. Part of the fun is the mystery of what comes next. Really, I can only “properly” review about 1/10 of the game, so here we go.

Each player starts with their own town board, and name their town by writing it permanently on their board. Everyone places an identical set of landmarks that need to be built on their town board. To win a game, a player must pay the cost to build each of their three landmarks, as well as paying into a shared community landmark. In subsequent games the goal is the same, but the community and individual landmarks will change.

Each player also starts with an identical set of two town square cards in play. Again, as the campaign progresses players will gain access to more town square cards and be able to choose which ones they will start with. But the first game is mostly about learning to play, so everything starts the same.

To earn the coins needed to build their landmarks, players will roll one or two standard dice to earn money from their town square cards and any establishments they purchase from a supply area in the middle of the table. As with everything else, the available supply cards will change in future games.

At the end of each game, the winner gets to record their victory in the Town Register at the end of the rulebook. As well, they will draw the end-of-game story card from the legacy deck and read it out loud, before preparing everything for the next chapter of the game.

As a consumer of entertainment products, I love a good story. Even before the advent of “binge-watching”, I had always preferred serialized programing. With that in mind, you would think that Legacy games would be right up my alley. As a consumer, you’d be right. But the real world challenge of scheduling a regular group of players to work through a complete Legacy game has always made me shy away. But the playing time on a single game is only 30-45 minutes here. We ended up playing through all 10 chapters over three nights, so you could very easily finish this in a casual weekend.

There ended up being two telling things for me over the course of this game. First is that I lost all but one game, and enjoyed every minute. The second, which contributed heavily to the first, is that in all but one of those games everyone was within two turns of victory, often within one turn. As with anything involving dice, there’s an element of luck to the game. But with otherwise equal players, that luck was a surprisingly insignificant factor in most of the games.

One of the other nice things about this Legacy game, compared to some others, is that nothing is ever permanently destroyed, or otherwise rendered unplayable. What this means is that once you’ve played through the entire campaign you can continue playing with a robust free play mode.

This was a great game, and I loved every minute. It makes me want to play more Machi Koro, and more Legacy games in general. The storyline isn’t hugely complex, but it’s fun and definitely worth the time to play through.