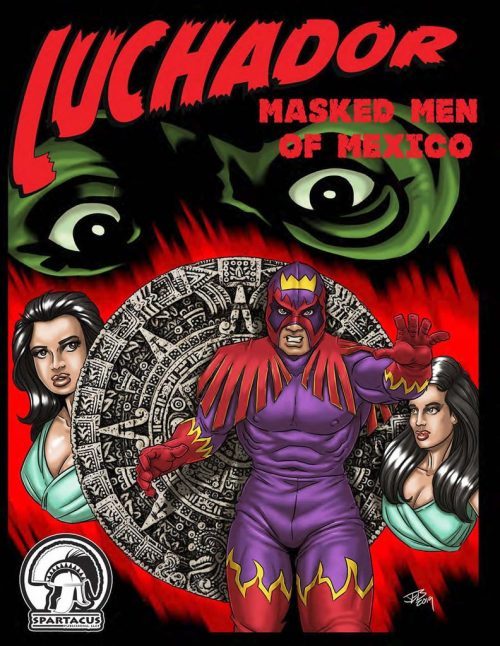 The best laid plans of rats and men often go awry. That is what goes through my head whenever I think about my previous reviews of the Luchador series. I wanted the initial review of Luchador: Way of the Mask to go live leading into Wrestlemania 2019. That didn’t happen. I wanted the fourth book (Disciples of the North) to be up going into Canada Day that year. Technically I made that happen but had to skip Painted Honor and Bright Lights & Barbed Wire to do it. Then summer happened and I got inundated with new releases. So I pencilled it in for Wrestlemania 2020. Well, I was in full quarantine in the weeks prior to that, killing that plan.

I’m not really sure where the last year went, and quite honestly I’m happy to forget most of it. We had to shuffle a lot of things around to ensure TheRatHole.ca survived, and that meant spreading out a lot of older releases. BUT that means I can actually put this review up in time for Wrestlemania this year!

Last week, I finished my Bright Lights and Barbed Wire review by saying that in place of a collected second edition, Masked Men of Mexico might be the second best thing. I said that having only just flipped through enough to know there didn’t seem to be any new rules. I was right! This book notes that Disciples of the North was the final book in the initial crowdfunding pitch and that it completed everything Sparticus Publishing set out to do with Luchador. There were no more rules to present, but there are a ton of stories to be told. Therefore, Masked Men of Mexico signifies the first true sourcebook in the Luchador line.

The basis of most of the book comes from a loose-knit campaign run by the designer to test out the character advancement system over time. Some of that advancement is shown off with a section dedicated to the previously presented pantheon of pre-gen people. (pregenerated characters, but I’m a sucker for an obscene amount of alliteration.) They didn’t include the full character sheet for these characters this time around. (Those are available in the first book or downloadable online.) Instead, what’s included are their updated statistics as an NPC-style stats block, as well as greater detail on their history, and how they developed and advanced during that campaign.

Through the previous books, Sparticus has introduced several major international wrestling organizations, with the likes of Amazon Wrestling Entertainment, Great North Wrestling, and Rising Sun Wrestling. Well this time we get a different sort of look, unencumbered by the plot of an adventure, at several Mexican companies. The rise and fall of Legends of Lucha Libra, the U.S. inspired Steel Cage Xtreme, and the up and coming Open Wrestling of Mexico. Some of these reference minor-background characters, while OWM also features fully fleshed out NPCs.

The House of a Thousand Masks is the physical embodiment of both the history and legacy of the Luchador lifestyle. Part museum, part training ground, part clubhouse, there are no ends to the stories that may pass through those doors. If the players don’t stir up too many dark secrets while they are there, some may even survive to cross back out again.

Of course, no campaign is complete without a “Big Bad” behind the curtain. Someone, or something, manipulating the story from the shadows. A good half of the book is dedicated to some of these enduring villains. Wrestlers, government agencies, terrorist organizations, and terrible monsters; all presented in great detail, complete with story ideas for them all.

With time, space, and a different focus to the book, comes a slightly different writing style from the older books. It’s a bit more polished (for lack of a better term), but still retains much of the casual banter that made the initial releases such a delight. I’m always a bit sad when I reach the unnecessary end of a series. Books, comics, tv, and yes even games. There were too many years between the first four books and this book five. I can only hope that a book six will come someday, as there remains a ton of fantastic potential in the Luchaverse. I want more, and I’m sure once you put on the mask, you will want more too.