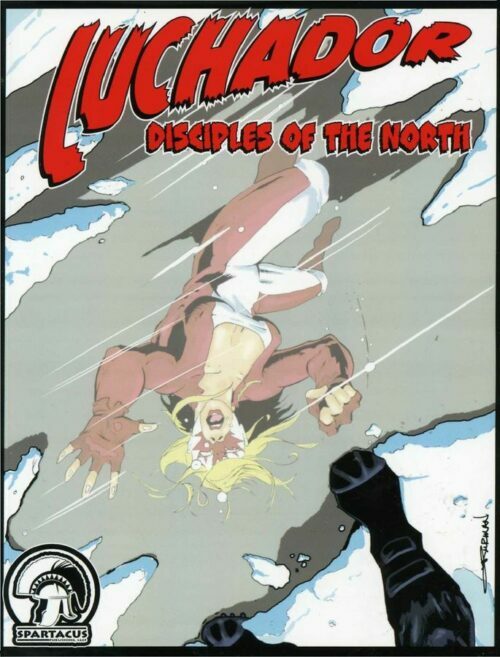 The supplements for Luchador: Way of the Mask are written in a highly linear manner. They reference each other extensively and expand on the rules presented in the previous books. There’s nothing intrinsically wrong with that method. In fact, the casual way this game is written is one of the things I enjoy about it. While I knew this going into Disciples of the North, I didn’t realize just how noticeable it would be to skip ahead.

That’s one of the reasons I chose to do exactly that. Every now and again I like to pick up what is, or arguably should be, a standalone product with as little context as possible. The other reason, for those not reading this the week it drops, is that Canada Day is in a few days and we happened to have a few Canadian themed games to review, including this one. The last reason is that I’m honestly just terrible at scheduling and didn’t get started in time to do all four Luchador books in time to drop this for Canada Day. Oops.

Ok, on with the review. Disciples of the North tackles, or rather grapples with, a number of new mechanics to be applied both in and out of the ring. The two most thematic of the new rules deal with using Tag Teams and wrestlers that are descended from a Dynasty.

Neither is a uniquely Canadian phenomenon, Tag Team wrestling was a mainstay of Mexican wrestling well before it truly caught on farther north, although the rules are distinctly different than it’s American descendant. Likewise, wrestling family dynasties are exceptionally widespread. The Von Erich’s in Texas and Los Guerreros in Mexico, are great examples. Meanwhile, from western Canada, the Hart Family is legendary worldwide, and in the east, the Rougeaus are four generations deep into the business. It is hard to argue that the legacy of these two Canadian families hasn’t shaped the landscape professional wrestling. So it makes perfect sense that rules for the fame a simple name gives would be included here.

Similarly, it’s hard to deny the impact that Canadian tag teams have had on that element of the wrestling world. The multiple iterations of The Hart Foundation, La Résistance, The Quebecers, Edge and Christain, even the up and coming Desi Hit Squad, all have their roots in Canadian wrestling.

Some of the other new rules include underwater battles and some errata to the previous book, Bright Lights and Barbed Wire. They also go back to review some previous actions, which helps to frame some newer ones, and there’s a new build point system that can be used in creating characters.

The NPC/Villain section gives a great selection of mundane, strange, and distinctly Canadian, opponents. I am a bit disappointed that some of the monsters didn’t include more Canadian cryptids. There were some great pitches for potential adventures in the great white north, so why not fill that out? Why include a Giant Snake, when you could have Ogopogo. Sure, You can use Gillman stats for the Thetis Lake Monster, but why not run with the theme? Medusa is fabulous, but why no Sasquatch or Wendigo?

The book closes with a fun adventure, called Loss of Face. The introduction made mention that the adventures plotted out for Luchador: Way of the Mask have a very loose-knit style of writing. This presents a special sort of challenge for an inexperienced GM but makes for an incredibly fun free-read. In fact, that sums up all the writing I’ve encountered in this game so far. I can see how some players might be frustrated by this style, but at the same time, there are people like me who enjoy the reading as much as they do the playing.

I came into this specific book with more expectations than I normally would, and I wish it had lived up to more of them. Don’t get me wrong, I loved everything that was in this book. I just wish it had pushed the theme a little farther. I’m looking forward to backing up and going through the other two books to see how they hold up.

1 thought on “Luchador (Disciples of the North)”