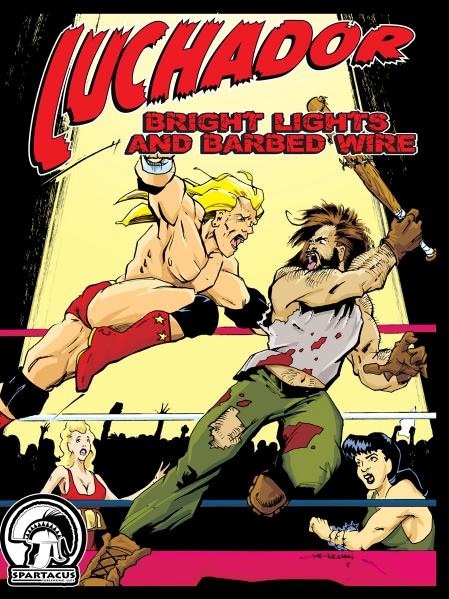 “No Holds Barred” style brawling matches had been common in the US wrestling world for decades, but in the 1990s something new exploded onto the scene. Sometimes literally. Extreme Championship Wrestling. In any other time and any other place, I’m not sure ECW would have ever made it out of their bingo hall. Around the same time, Japan went over the top with exploding rings, electrified barbed wire rope/cages, and worse. Many of the major wrestlers who were/are known for their hardcore styles developed that style overseas before bringing their talents, and tables, back to America. ECW was the inspiration for many a backyard match and even the final battle in Hamlet (yes really).

So it’s fitting that when Luchador came to America, it would look at the Hardcore lifestyle, and like that lifestyle, it would build on what the game had developed in its version of Japan in Painted Honor. It’s worth a reminder that Luchador is not intended as a reflection of the real world or the “real” America. Inside the ring, this is a world of theatrics and sports entertainment, while outside the ring the world is no less theatrical.

Bright Lights and Barbed Wire is the third book, but my fourth review, in the Luchador series. Like the others, it expands the original rules in small ways. For example, in America, many wrestlers don’t wear a mask. A player can take that creative path, and along with it, all the benefits and pitfalls of such an unenlightened choice. Another major expansion is Valets. Originally no more than a short NPC entry in the original Way of the Mask book. Now they’ve provided rules to hire different types of Valets, and a path to improving them alongside their player character. There are new ways to handle players who collect title belts like trading card and ways to handle police involvement (or lack thereof).

As always there are new specialties and new luchador character classes. But they couldn’t possibly talk about hardcore wrestling without addressing weapons. Luchador is very specifically not a game about weapons, but is a hardcore match really hardcore if something doesn’t get wrapped in barbed wire?

I do want to point out that one of my disappointments when I skipped ahead to Disciples of the North, was that there weren’t many thematic NPCs and I specifically noted the absence of Sasquatch/Bigfoot. I stand by that overall disappointment, but Sparticus DID include Bigfoot here which explains why they didn’t include anything similar in that book. As well as Bigfoot there are also less unusual characters like Backyard Brawlers, Boxers, and even a Rollergirl.

The book closes with an adventure called Knights of Terror. Centred around a local renaissance faire. It has everything: nights full of knights, and things that go bump in the knight – I mean night. The adventure is a ridiculously fun little romp that is totally not a murder mystery.

Have taken an unintentionally long break from Luchador, I’m left with almost the same impression I had originally. I love the very casual writing style. I love the overall feeling of the game. I love so much of what this game brings to the ring. It’s not perfect (I was, however, pleasantly surprised at the lack of errata to the previous book here) and I still would love to see a second edition collecting all of this into one place. Although I may have the second best thing. After a much larger break, and after I had published 3/4 of these reviews, Sparticus Publishing made an unexpected return to the squared circle. So come back next week for Lucador: Masked Men of Mexico!