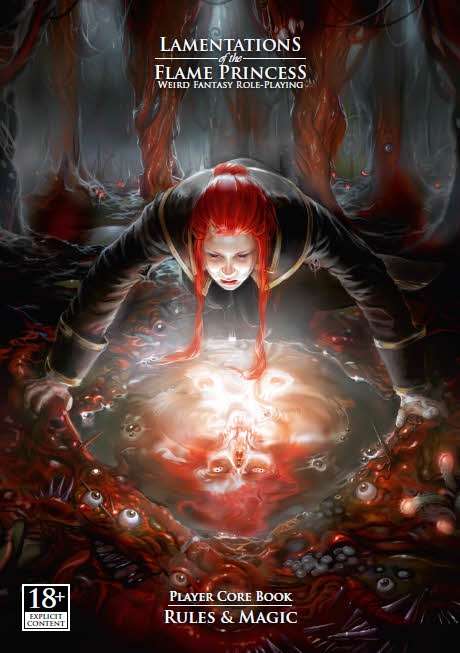 History lesson time, kids! Back around the year 2000, Wizards of the Coast created the Open Gaming Licence (OGL) and applied it to all of the older Dungeons & Dragons editions they had previously acquired with the purchase of TSR, Inc. While they did try to back peddle this license with the 4th Edition of D&D, they soon saw that it provided a huge boon to both the industry and their own business. It allowed other publishers to create content that could bring new players to their own products. It also started a new style of RPG games, generally known as the Old School Renaissance or Old School Revival (OSR). Many of the these are simply D&D “retro-clones”. But others, such as Lamentation of the Flame Princess (LotFP), have taken some of the mechanics, and feeling, of OSR games and taken them somewhere unique.

LotFP bills itself as Weird Fantasy Role-Playing, and truly lives up to that. They have released numerous adventures, both in print and digitally, that cover fantasy, fairytales, near-modern times, and more. But no matter the theme and genre the adventures all seem to have a few things in common. They tend to be very dark, beautifully brutal, and often unabashedly sexual. By sexual I don’t mean Amazonian warriors in nonsensical chainmail bikinis. In fact, unless there is a “point” most of the characters are portrayed fully clothed in outfits appropriate to the setting. By sexual, I mean they don’t shy away from mature or explicit content. Sometimes that simply means that humanoid monsters don’t wear clothes, other times sex is used as a full-on thematic focus (think the movie Orgazmo).

Obviously, the best place to start learning a game is with the rule book. For LotFP that starts with the 170-page tome that is the Player Core Book: Rules & Magic. The current edition of Rules & Magic is a revision of the original version from the LotFP boxed set and is intended to be one of 2 books, along with The Referee Core Book, that is LONG overdue for a reprint.

The first half of Rules & Magic is (shockingly) the rules. Standards like character creation, equipment, and general adventuring, are all covered. It also includes longer term and larger scale situations like encounters at sea, hiring retainers, and owning property, giving groups the tools to create truly epic storylines.

The second half of the book is about (wait for it…) magic (whaaaaaat?). There is general information about magic, creating magic items, and even researching new spells. It then goes into deeper detail about Human Clerics and Magic Users, as well as Elves, and gives a lengthy starter list of spells.

Finally, the Appendix contains a short glossary, a section on using firearms, and an overview of the character sheet.

This is where things go slightly off for me. There is an OVERVIEW of the character sheet, that’s it. There isn’t a copy of the blank sheet. I thought maybe a clean copy would be in the Referee book, but no such luck. I suspect it may have been included with the original box set, but the only way I found a copy, was hunting in the forums for a post by another player who took the trouble to google it. There was also a slightly different version released with Veins of the Earth, so use whichever suits your game. Similarly, the Referee book has not been in print for some time. You can download a PDF of it, but progress on an updated version has been disappointingly slow.

Getting back to THIS book, it does a reasonably good job of presenting the rules. It does assume a degree of knowledge about RPG gaming, but not to a fault. There are a few rules that were placed in somewhat odd sections, making it hard to reference.

There are some layout issues, specifically with the page numbering, that actively frustrate me but that also aren’t world-ending. Throughout the book that art is inconsistent in style, quality, and placement. There pages that have seemingly random mid-text embellishments and pieces of art that are off-puttingly cartoonish. At the same time, there are pages with beautifully detailed line work, gorgeous gray-scale images, and some of the most beautiful paintings I’ve ever seen in a gaming book.

I think my previous exposure to LotFP may have coloured my expectations of this book, so I want to close by clarifying a few things. I have seen several LotFP products over the past few years. They have consistently put out great retail books, and some of the most interesting products in for any given Free RPG Day. LotFP is consistently one of my most anticipated picks for that event. Most of the issues I have with this specific book, I haven’t immediately noticed in the subsequent things they’ve released since this one. As a game, LotFP is something special. As a specific, stand-alone, product, I feel this book needs a major update to get on par with the rest of the brand.

2 thoughts on “Lamentations of the Flame Princess (Player Core Rulebook)”