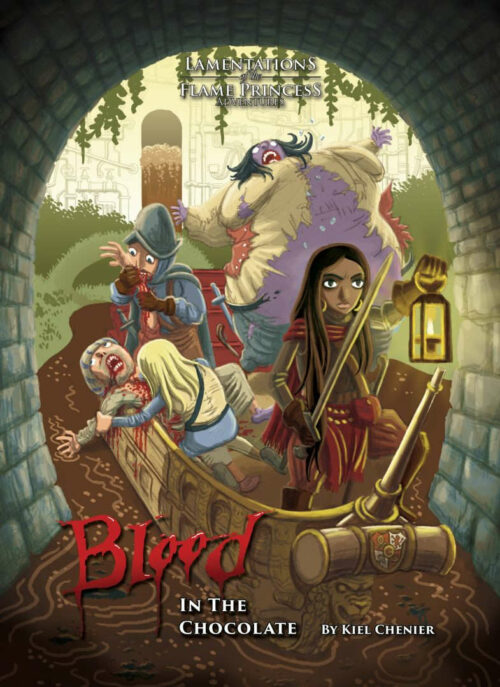 When I first talked spoke to LotFP about reviewing some of their books, they naturally assumed I wanted to review their most recent, and most hyped, book at the time. I told them what I actually was looking to review was Blood in the Chocolate. I’ve followed the artist, Jason Bradley Thompson, for some time. Plus the topic was too intriguing not to dig into. [In hindsight, this was a good choice, as I would not feel comfortable reviewing the creator behind that other book. -dc]

The default setting for most LotFP adventures is pseudo-historical, and in the case of Blood in the Chocolate, it is set in 1617 on the coast Friesland, in the Netherlands. The historic events around the Holy Roman Empire, the Viceroyalty of Peru, the industrial revolution, and the climate surrounding international commerce, all play a part in the adventure. In keeping with the interoperability of OSR games, many of these elements can be altered or omitted, but the closing of the Introduction says it best.

“This is an adventure about man’s greed and capacity for cruelty outpacing the ‘low evil’ of sorcery and otherworldly creatures. Reducing things to just magic or madness will lessen this tone.”

This is reinforced by the lengthy background of the main antagonist, Lucia de Castillo.

“Lucia is a villain. She is not being controlled by some eldritch force, she is not an agent of some more sinister power, she is not a wounded soul acting out of noble intent, nor is she twisted because she is a ‘product of her time’. She is an evil businesswoman. She enslaves those weaker than her because she truly believes she is better, and causes pain and torment because it delights her. She is sadistic, perverted, gluttonous, impossibly vain, and greedy. She only shows compassion or mercy if it directly benefits her, and will spare no expense in silver or blood to see her enemies destroyed in the worst ways possible. She is a villain – and should be played as such.”

The adventure takes place in, and around, the fortress-like factory of the Castillo Chocolatería, makers of the finest bars of chocolate in Europe (over a century before such products would become widely available in the real world). The players have been hired to break in, and steal Lucia’s secrets.

The players are given a set number of loose goals, but unlike many stand-alone adventures, they are not otherwise driven through a specific plotline to obtain those goals. There is a certain natural flow between rooms and encounters, but it’s very much a sandbox approach to roleplaying, rewarding or punishing players for all of their choices instead of leading them into making specific choices at specific times.

That sandbox style of play means it’s also designed that it could end in a variety of ways. This can make for some interesting choices and roleplaying even after the main adventure is complete, and can also make it fold more neatly into a campaign if that’s what your group wants to do.

Something LotFP is very upfront about is that it doesn’t shy away from adult content. Often it’s an important theme within a specific book, but with this adventure, it could just have easily done without it. Lucia’s perverse desires are valid and fitting of her character, but some of the other instances just didn’t feel necessary and almost shoehorned in. With that said, they certainly made some of those encounters a bit… uh… juicier.

I really enjoyed the strangeness of this adventure. If you were to ask me to describe it a few sentences, I would call it Charlie and the Chocolate Factory, stripped of any pretext of being a family story, and reimagined by Rob Zombie. If you want something out of the ordinary, this is it.