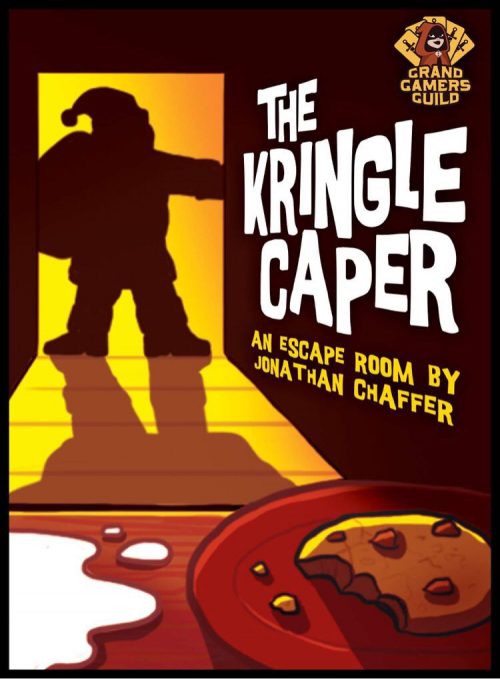 [Before I even start, The Kringle Caper is a “room escape” deductive-puzzle mystery game. If I am vague on many points of this review, it is not only to prevent specific spoilers but also to mask what may or may not BE a spoiler. Everything in the game could matter at some point. -dc]

Here in Alberta, our holiday season has been scuttled by a too-little-too-late provincial lockdown. As a result, I was a bit unsure of what I was going to fit into today’s timeslot. I was already pretty sure I wanted a smaller game with a print-and-play option. Alberta isn’t alone in a restricted ability to physically shop, and it’s getting a bit close to Christmas for shipping that is both affordable and timely.

Then I encountered The Kringle Caper by Grand Gamers Guild. It has a regular physical release, but also a print-and-play release that is small enough to be affordable to print. As it turns out, it is also the best laid out print-and-play cards I have EVER encountered. Too often I’ve found that printing double-sided cards (sometimes even from a “professional” printshop) can end up not lining up as nicely as I like. This tends to be extra problematic if you are using a printer that doesn’t do it automatically. But with this game, the cards are printed back and front on the same page connected at the bottom. Cut, fold, glue/tape, done. It takes more printing, but I still wish more games had this, at least as an option.

Important things to note when assembling the cards:

-Make sure you do your best not to look at the front of the cards in any detail. Seriously, not knowing what’s on them beforehand is the point of the game.

-Print them in colour, not greyscale.

-The instructions say to tape or glue the cards together. Gluestick is best, but tape works just fine as long as it’s transparent. The cards are individually numbered on both sides; you don’t want to blindly tape over that number or anything else that might be important. (Because you didn’t look at the front… RIGHT?)

-I don’t recommend sleeving the cards as an alternative to gluing them. I made the mistake of doing that at first. It was less than ideal for several reasons. Having some cheap sleeves or another set of cards (greyscale is fine) around in case you wanted to write on the cards isn’t a bad plan though. You can always write on the regular cards if you like, I just hate doing that. (Legacy-style games are a challenge to my instincts for the same reason.)

Once the cards are ready to go, grab some paper and pencils for everyone playing. These are “optional” but trust me, you want them. The other thing I would personally recommend is that if you are going to play with more than one person, maybe more than two, you may want a set of cards for each person. You could get away with a projector, but being able to physically pick up the cards and get a better look can be beneficial. Given the current state of things, having your own cards means you could play this over a video call without any difficulty. But again, only if you have your own cards.

The last “component” is a web app. Scan the QR code or enter the URL into your browser, and the app walks you through the game. As near as I can tell, once the app is loaded you don’t need internet access again to be able to use it. Type your answer into the field at the top of the window when you think you’ve solved the current puzzle. If you are wrong, or it thinks you’ve made a grievous spelling error, it will tell you. If you are correct it will tell you what to do next. If you are stuck, you can ask for a series of hints. If you are STILL stuck, you can even get the answer and just move on. The first hint is free, but more will cost you points at the end of the game. One of the nice things, however, is that the extra hints aren’t totally blind. The free hint may or may not be a braindead obvious hint about how you find the answer, but it also shows the more specific things you might need a hint about, which in itself can provide a hint.

I have encountered similar puzzle games in the past where there are no hints, or you need to scour the internet for hints, or you need to buy another book or a magazine to get help. Going all the way back to the early days of 8 bit PC games with a dozen floppy disks. Going even further back to text-parser games like Zork (or now Parsely). They have always frustrated me to the point that they basically turned me off deductive-puzzle games completely. Years later, that’s still the case and I was very hesitant about playing this. I played solo (because pandemic) and asked another friend who enjoys puzzling things to give it a try.

The app times you and scores you at the end. So I have empirical evidence that I kinda suck at this sort of game. Apparently, the average time is about an hour; my friend was in that ballpark. I was… not. But it was certainly interesting seeing where they got caught up compared to where I did.

If you didn’t want to play as a cooperative group, everyone can pick up a copy and compete against each other in real-time. Who was the fastest? Who had the best score? Was it the same person? With all the options to play, this is a game that is exceptionally timely. Despite my lifelong aversion to games like this, I had a surprisingly enjoyable time. If a sequel were to happen next year, I wouldn’t think twice about picking it up. Who wants a Krampus Caper party next year? YES, PLEASE!

I came across this gem at the same time as the Suzy Snowflake video from last week. Centaur Productions produced both spots for WGN-TV in Chicago, by stop-motion animator Wah Ming Chang.