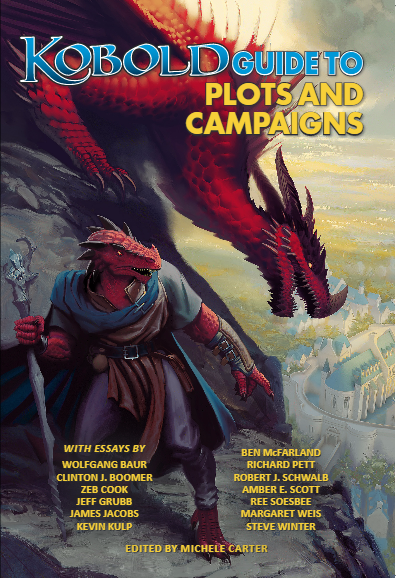 If I were going to offer a university degree in tabletop games, the Kobold Guides would be the textbooks for an entire stream of courses. Each volume contains a number of essays from experts and veterans in the field, writing about the things they love and know. Besides doing the thing, I can’t think of a better way of learning about a subject than to absorb the words of people who are better at it than you.

The Kobold Guide to Plots & Campaigns, the sixth book in this series, is like taking a master-class in designing a role-playing campaign. The essays collected here are by some true masters of the craft: Zeb Cook, Jeff Grubb, James Jacobs, Amber E. Scott, and Margaret Weis just to name a few. All are names I’ve encountered in any number of my favourite Dragon Magazine articles, gaming sourcebooks, and adventures over the years (and in one case, at the gaming table a few time, much to my continued delight), so I know there is a wealth of experience in the pages of this book. And they deliver that experience to you in nineteen essays covering a wide variety of campaign design topics, curated and edited by Michele Carter. The essays cover everything from how to start a campaign and how you might incorporate published adventures into your campaign world, to slightly more esoteric subjects like running an evil campaign successfully, or running a campaign which spans generations of characters.

If I gushed about every essay this post would get stupid long, so I will limit my gushing to just two, hard as that is. “Choosing an Ending First”, by Wolfgang Baur, is a great look at how to design your campaign around the climactic end-scene you envision for the characters. On the surface, it sounds very rail-roady to reverse engineer your campaign based on how you want it to end. But Wolfgang does an excellent job of explaining how your ending can inform your campaign design without stamping train tickets for your players. It was a way of looking at campaign creation I had never considered before; usually I figure out how I want to start things, and the end-game is nebulous. His suggestions and ideas gave me a lot to think about, and have already influenced two of my campaigns.

I’ve been lucky enough to actually meet and somehow befriend Amber E. Scott a number of years ago. We’ve gamed together a few times, and I always enjoy speaking with her and hearing her on panels. You know how, when you have a smart friend, you think you know how smart they are? And then they do something, and you realize you only thought you knew? That was my experience reading Amber’s essay “Using Cliffhangers Effectively”. I’d been using cliffhangers in my campaigns for years, (I thought) properly and successfully. Amber’s essay corrected my thinking on that, and I realized I’d been using them like a cudgel when they could really be more of a rapier. A stand-out moment for me, and one of the reasons I love reading collections like this.

So who would I recommend buy this book? Any Game Master who wants to get better at running their campaigns should read Plots & Campaigns at least once, and ideally enough times for it to get dog-eared. If you are a new game master this book will serve as an invaluable toolbox for years to come. Heck, Richard Pett’s “Crooked Characters” is going to keep you hip-deep in NPCs for the foreseeable future. If you’re a veteran, you’ll discover things you never knew as well as refinements of topics you thought you understood fully. And “Crooked Characters” is also going to serve you well.

If you’re a player but not yet a GM, I’d say it’s worth it to borrow a copy if you want to get a peek behind the GM screen. The book is definitely not written with the player in mind, and that’s okay. But as a way to get insight into what your GM is doing for you every week, it’s a good read.

Since scoring systems seem to be popular, I’ll give the Kobold Guide to Plots & Campaigns four frothy mugs of ale out of five, and drink the fifth one myself while re-reading the book.

Have you read the book? What did you think? Drop a comment to let me know.

1 thought on “Kobold Guide to Plots and Campaigns”