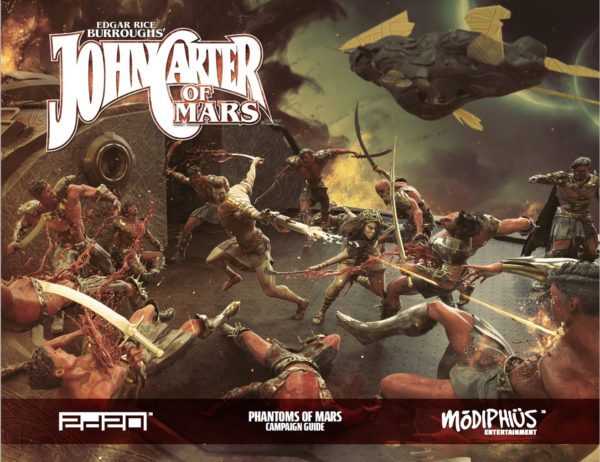 [If you’ve never played John Carter of Mars: Adventures on the Dying World of Barsoom, you can read our review of the Core Rulebook HERE]

This may well be the John Carter of Mars book I’ve been most excited to review. Phantoms of Mars takes the players beyond the canon of Burroughs’ Barsoom and deeper into the Barsoom of the game. The book is split into three sections. Introductory matter, a full four-part campaign, and something completely different. I will do my best to keep this review as spoiler-free as possible, but not everyone views the same things to be a “spoiler” so consider yourself forewarned.

The book begins by introducing just what this is and how this book fits into your game, before introducing the Cast of Characters that will appear in throughout. I love that they have formatted it like this because it allows for a longer and more consistent look at the Narrator Characters. It also makes it fast and simple to pull those characters up later if the Narrator wants to integrate them into another story.

The campaign is set in the latest era of play, the Jeddak of Jeddaks Era, which offers the most freedom as it happens at the end of the source material. But if players are in an ongoing game there is very little that couldn’t be adapted to the Prince of Helium Era. Many of the elements in Phantoms haven’t been introduced during the Dotar Sojat Era, so that would be a significantly more difficult adjustment to make. Regardless, players still have the option of playing as John Carter or other notable characters but are never required to do so. To be frank, if you want to play as Carter & Co. this is the place to do it since it is explicitly not rooted in his existing stories, but I will always promote playing your own character and building your own legend. This campaign is designed to play completely standalone, but also includes tips for places that it could be inserted into a homebrew campaign, and where a homebrew adventure could likewise be integrated into this campaign. Saying a published adventure can be included in your homebrew is common, but to be able to drop other adventures into the middle of a published campaign as seamlessly as this is very much less common.

As a whole, the campaign moves throughout Barsoom. [Minor spoiler ahead] But one of the more interesting locations is the dead city of Korvas. Korvas is the setting for John Carter and the Giant of Mars, written by Burroughs’ son, John Coleman Burroughs. The younger Burroughs’ work was not entirely consistent with his father’s vision, nor is this version of the Korvas entirely consistent with its literary counterpart. It is one of the few, and most appropriate, bits of non-canonical source material and I appreciate the tribute. If you disagree with that it’s also an easy swap-out.

Another thing I greatly appreciate about the flexibility in the campaign is the acknowledgement of the “railroading” that can occur in overly scripted adventures. In most major challenges, especially in battle, there are a number of probable outcomes that are wildly different. Add to that the inevitability of players attempting to take the story in a completely unpredictable direction. Not only has Modiphius addressed the polar opposite results that a conflict may bring, they regularly include suggestions for guiding the story back in the direction it needs to move.

I will always admit to being a mediocre GM/Narrator, and that colours my opinion about how detailed I like to see a published adventure. Phantoms of Mars does an exceptional job at balancing structure with “sandbox” in a way that should appeal to most people at the table, whether they are running the game or playing in the game.

The final section of the game presents the rules for Swords of Mars, or more generically the 2D20 Skirmish Rules, for playing a wargame-style game with miniatures.

It makes sense. Large scale battles are already presented in the Core Rulebook, but the John Carter stories are all focused on the heroic actions of a few individuals. Swords of Mars creates a new way to play the role of those heroes with all that pesky roleplaying. I’m sure there are people who will disagree with this, but at its heart that’s what wargames are: RPGs distilled down to just the fight scenes. This is even more true in what are referred to as “skirmish” scaled games. You aren’t controlling an entire army, you aren’t controlling just a single character, you are controlling a group of characters roughly the size of a large RPG party.

Similarly, Momentum is gained and spent to improve a player’s odds of winning like in the RPG rules, but it takes on a much greater role here. At the beginning of each round (after the first), the player who ended the last round with the most Momentum points remaining goes first, additional momentum is then gained based on the figures in play and scenario objectives that a player controls.

The chapter also profiles the individual stats for all of the miniatures available at the time of printing. Since much of the action on Barsoom actually takes place above Barsoom, there are also rules and stats for using Airships in play. There’s even a scenario for a ground flyer “chariot” race using the available airship tiles.

My only real complaint with the Sword scenarios is about the setup images. They are individually understandable, but they lack consistency in their formatting. One will have the action constrained to a light background surrounded by darker fading, the next has the action on the previous darker background surrounded by light terrain. One has starting points as a coloured box, others start with simple text labels. If there is some sort of distinct key to the formatting, it’s not included here.

The Swords of Mars rules are ostensibly bonus, value added, rules, but there is SO much potential for it to be so much more. Wargames are by nature expensive to get into playing. There are certainly some creative, unofficial, ways to try these rules out before you buy, but the minis ARE pretty gorgeous (but that’s a conversation for another day.)

As for the Phantoms of Mars Campaign Guide, as an overall product, YES. Just YES. I love the story being told here, and I love how Modiphius has managed to make a completely non-canon adventure feel like it was found in a pile of unpublished writings by Edgar Rice Burroughs himself. At the same time, it could easily be adapted to another 2D20 game. I could easily see Klingons running through this campaign or even moving it to the Hyborian lands of Conan. So even if you don’t love the source material (in which case why are you still reading this?) this is worth picking up.