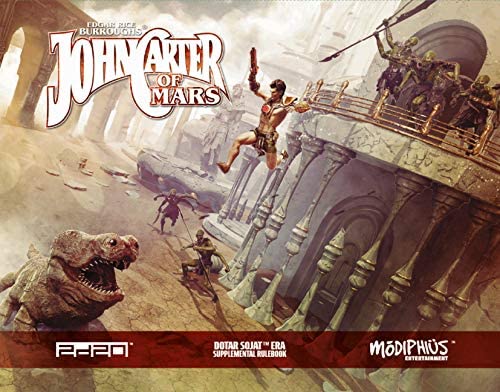 [If you’ve never played John Carter of Mars: Adventures on the Dying World of Barsoom, you can read our review of the Core Rulebook HERE]

John Carter is a unique game to play. There are other games that have distinct eras of play, but none are oddly connected as John Carter. Star Trek Adventures has TOS and TNG timeframes, but they are effectively unconnected. Conan covers a fairly large breadth of time, but most of it can be chalked up to expansive worldbuilding more so than any sort of linear timeline. But the 3 eras of John Carter are more than that. If the events of a Princess of Mars don’t happen as they do in the book, the literary scope of Barsoom can’t expand into the events of The Gods of Mars and so on.

The Dotar Sojat Era, is extra-challenging because it covers more than a decade’s worth of events, but less than a single book. The latter parts of The Princess of Mars are technically part of the Prince of Helium Era so there is a great deal of very important events being set up by a comparatively small amount of source material. (This is also part of why attempts at adapting the book to film screens have been a flop, and the rumours of an actual series on Disney+ is super exciting.) The John Carter of Mars RPG isn’t really intended for the major characters in the Barsoom series to be used as Player Characters (PCs), but neither does it forbid it. In fact, this Era of play makes it incredibly attractive to take on those character roles, or for players to replace those characters in the story with their own PCs. It makes sense, this being the beginning and all, but here’s the problem: If the intent is to run more than a single adventure, using or replacing Carter means that the major events of A Princess of Mars MUST happen. The game becomes a reenactment where the outcome is necessarily predetermined.

BUT if you use A Princess of Mars as a backdrop to your adventure the entire world of Barsoom can become your oyster. BUUUT the Dotar Sojat era is also the most tightly focused era. Earthborn folx are all but unknown. Relations between the Red Martians and Green Martians are tense. Relations between different Red Martian cities are tense. Relations between different Green Martians hordes are all but non-existent. BUUUUUUUUUT amidst all of this political strife there is some great storytelling to be had. Perhaps the players are all Red Martians with Assasin or Spy Archetypes, in a game focused on mystery and intrigue between cities, with some big Thark encounters for good measure.

While the Dotar Sojat Era manages to simultaneously put heavy restrictions on storytelling while also opening up the story into fascinating new places, eventually John Carter must marry Dejah Thoris, the titular Princess of Mars, to bring a new era of peace and cooperation to the peoples of Barsoom as the Prince of Helium. Likewise, the world encompassing the game ultimately continues to march forward into the Prince of Helium Era. Opening up even more of the story and more fascinating new places. It has a built-in campaign story arc.

The supplemental rulebook itself is well laid out, opening with Tales of the Era. It touches briefly on the untold history of Barsoom, before delving into a summary and analysis of A Princess of Mars. I expect that this section will likely be both expanded in length and condensed in detail to fit the increasing number of titles covering the subsequent Prince of Helium and Jedak of Jedaks Eras.

The Peoples of the Era chapter provides new and exciting Talents and Accolades for the Red and Green Martian Peoples, as well as for Earthborn characters and general Talents appropriate for any character in this age. Champions of the Era presents new Narrator Characters (NCs) unique to this era of play, plus recommendations to adjust many of the major NCs from the Core Rulebook to fit more accurately into this specific era. Similarly, the Mysteries of Barsoom chapter details technology, powers, and locations that would most likely be encountered in this time.

The Narrating the Era is exactly what it sounds like, a chapter focused on explicitly running a game in the Dotar Sojat Era. The tone and structure of the stories, as well a number of Adventure Seeds that the Narrator might draw from in building their own story.

The final two chapters are less era-specific; greatly expanding on some of the rules in the Core Rulebook. The larger of these is a deep delve into the Airships of Mars. The Core rules are completely sufficient for most games in which airships are little more than functional props. These expanded rules are for Narrators who may wish to place a greater focus on Airships and are formatted to pick and choose what is needed for whatever level of focus that may be. It doesn’t simply cover ship-to-ship tactics and battles, but everything down to building and customizing your airship(s) along with examples of a ton of example ships. The book then closes out with optional rules to expand the existing renown system by adding Achievements and Deeds as ways to expand characters.

The Dotar Sojat Era is the timeframe that is most well known, simply by virtue of comprising the first, and therefore most well known, book of the series. This book does a great job analyzing and explaining the source material. The expanded rules for airships and renown, as well the expanded character creation options are useful for anyone wanting to play a Thark, Human, or Red Martian character regardless of the era. Either of those makes for a valuable resource to players and narrators alike.

On the one hand, this is the era of play I was most curious to explore, because I know it better. The flip side of that is that I think I’m more excited at the prospect of the Prince of Helium era, because I’ve only read some of those books, and I’m not aware of any major adaptations having been made of them. I have only a passing knowledge about the books in the Jedak of Jedaks Eras (which is the recommended era of play) and I’m honestly torn about keeping it that way for now. I suppose we’ll see what I decide when I get to those books. Modiphius is REALLY good at bringing some of the most wondrous worlds to life, and the Dotar Sojat book is no exception. The world Edgar Rice Burroughs created is nothing short of incredible and nowhere does it show more than in this game.